Next step in the ceiling saga

All the wallpaper has been taken off! It took a while. After the removing everything that shouldn't be there and that would come off without the use of a steamer, it was (evidently) time to remove everything that would only come off with. I wasn't looking forward to doing that on the stepladder, so I investigated the platform Rose had left me. She had clearly never used it herself! It still had bubble wrap around some of the bits. When I tried to assemble it in the garage it wouldn't work. I took it inside for some more faffing. Somehow, the two ladders that were the vertical supports wanted to fold outwards! That's not good. Internet suggested I didn't have the complete thing (had I accidentally thrown some parts away?), but strangely enough it seemed the bits I didn't have were meant for stopping the ladders from folding inwards.

I later had another attempt. I basically just ratchet-strapped the top of the ladders together so they couldn't go anywhere. And it worked! I had a platform! I now could do a much bigger part of the ceiling before I had to move my elevation device. Great! So I got steaming.

Some of the beams are difficult to get to, and you have to keep re-filling the steamer, and moving platform + sheet, and it's altogether a somewhat unpleasant job that smells and is hot and involves working above your head and dripping hot liquid on yourself but I made good progress. And one good Sunday it was done! That meant I would have to get mentally ready for sanding the bloody things too. After the scraping they don't yet look good enough to be varnished! Stay tuned... 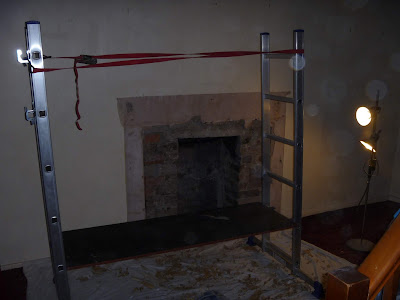 The platform: a big improvement 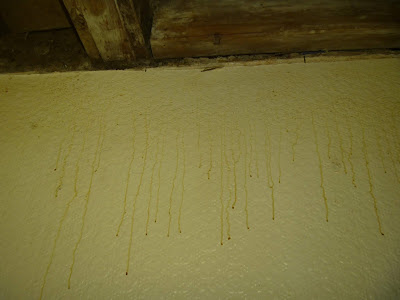 Would the previous owner have smoked? 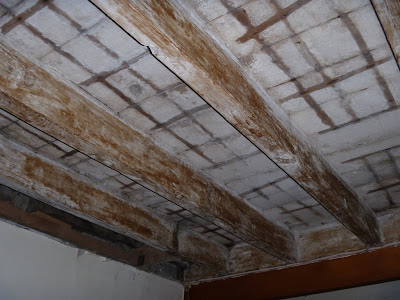