We were spoilt for choice. We had two unexplored directions to go in the mine of our recent interest: ahead, or down. We could go ahead, through the chest-deep water to see what lay beyond, and we could drop to a lower level, as during the previous visit we had placed some bolts. We decided to do the latter first!

I had the privilege to go down first. Upon touch-down I immediately noticed a beautiful cart. Nice! And an equally immaculate wheel barrow around the corner. Not many people had been here, by the looks of it! And on one side a sort of timbered ore chute lead down. 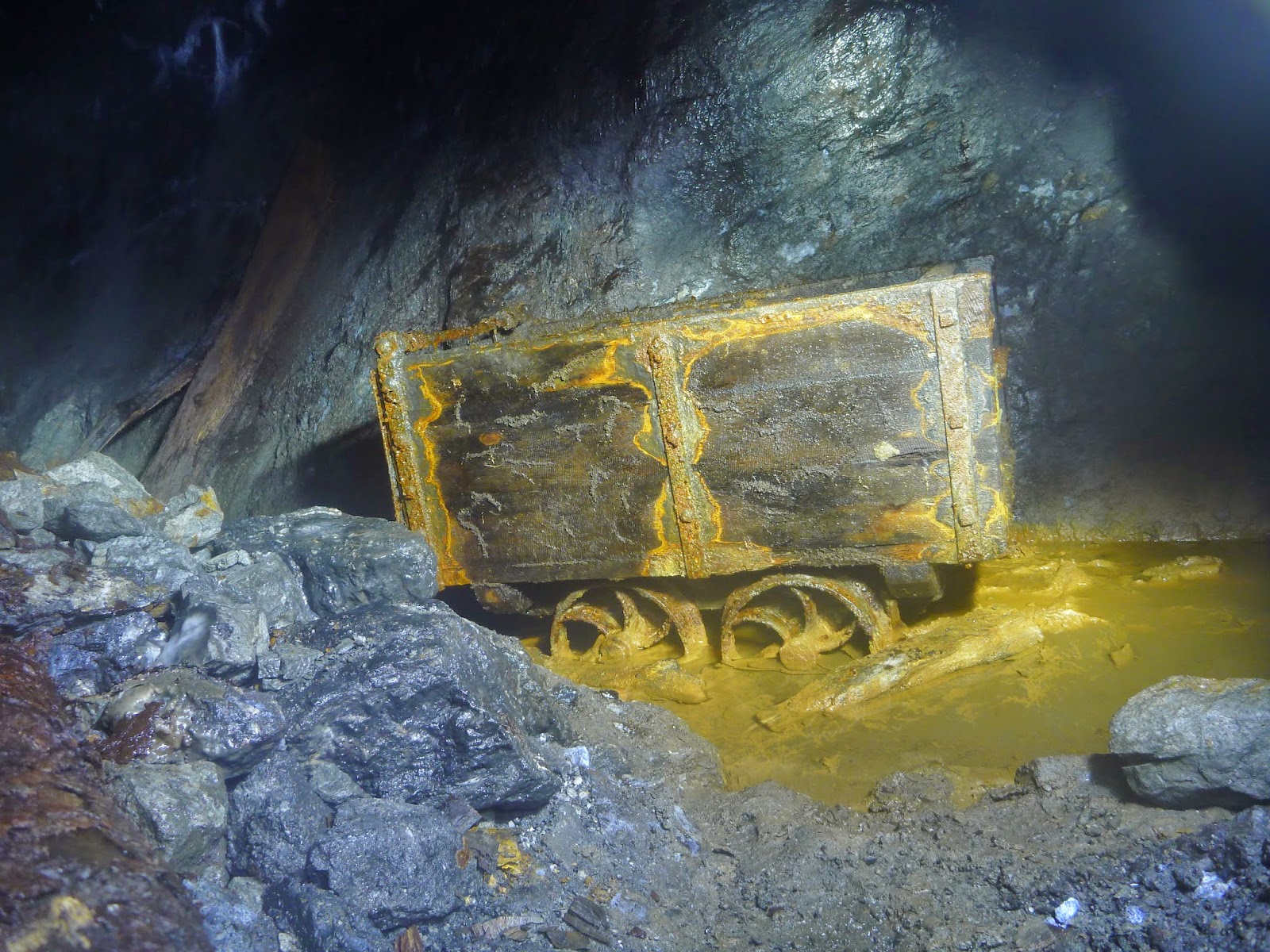 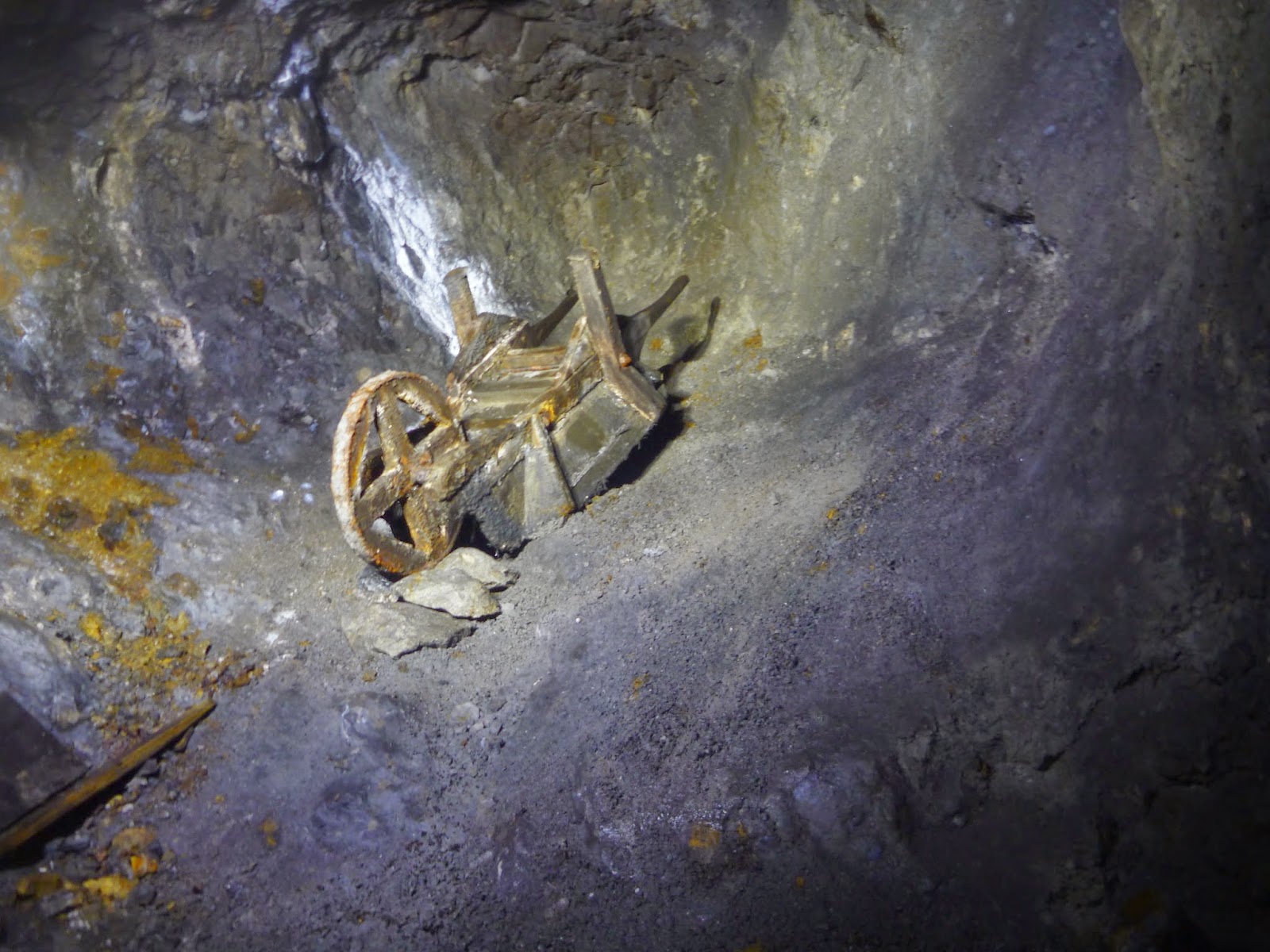 In the meantime the other started to gather. I took pictures of the cart and the wheel barrow, and had a small look on the other side: there was a hole leading down to the lower level, and further on there was a collapse, but it looked like it went on. But I waited for the others. When we were all down we decided to check out the chute first; Phil went down, and reported back that it would be hard to go down to the next level from there. Wobbly timberwork in the way! But for a next time we could easily bolt the other way down I'd seen. The rock face there seemed solid. And one would expect both parts of the level to connect. 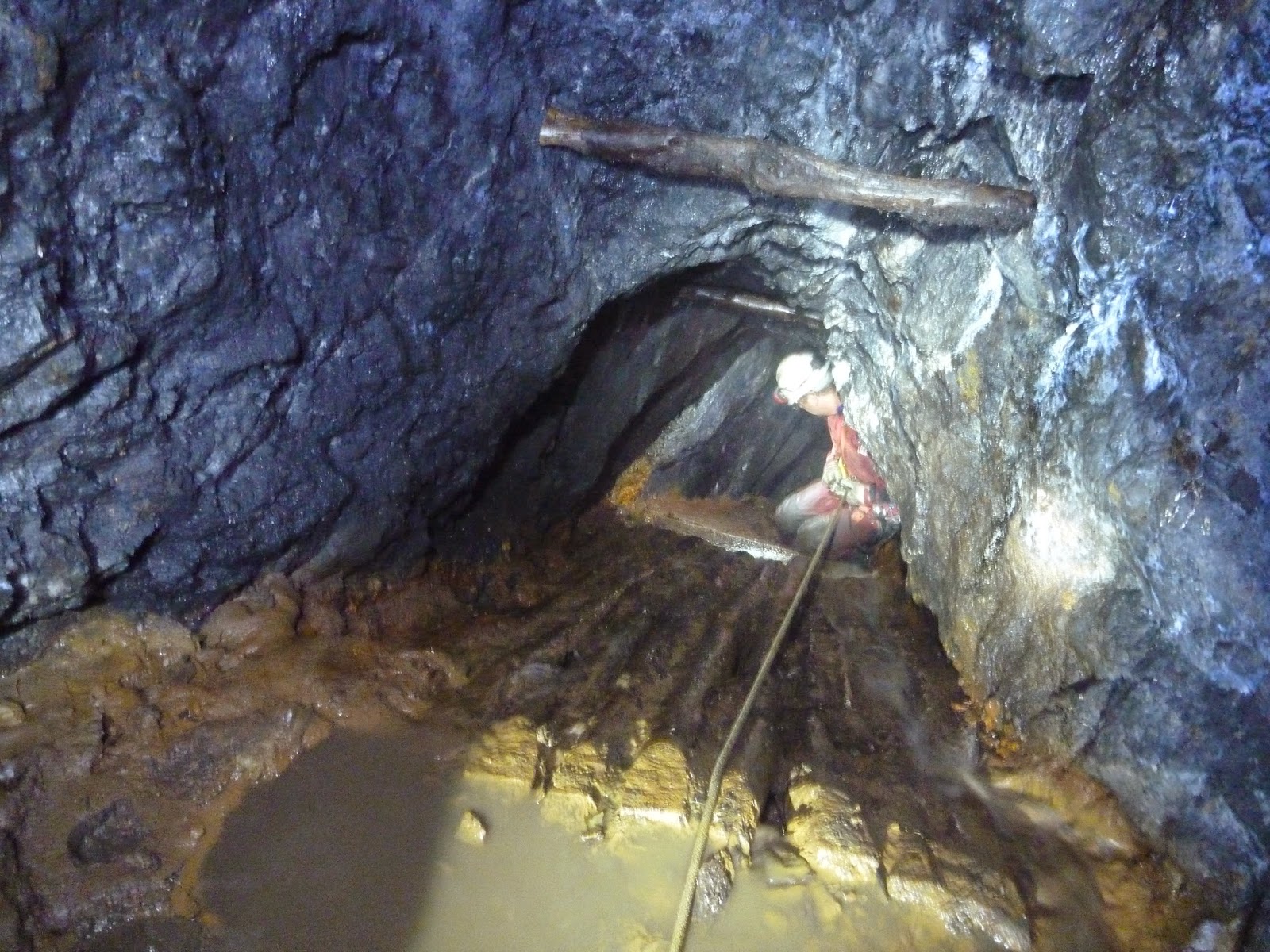 When Phil was back up, and I had used a snagged rope as an excure to have a look too, we crossed the collapse. It didn't go very far beyond. Time to go back up and explore beyond the deep water! 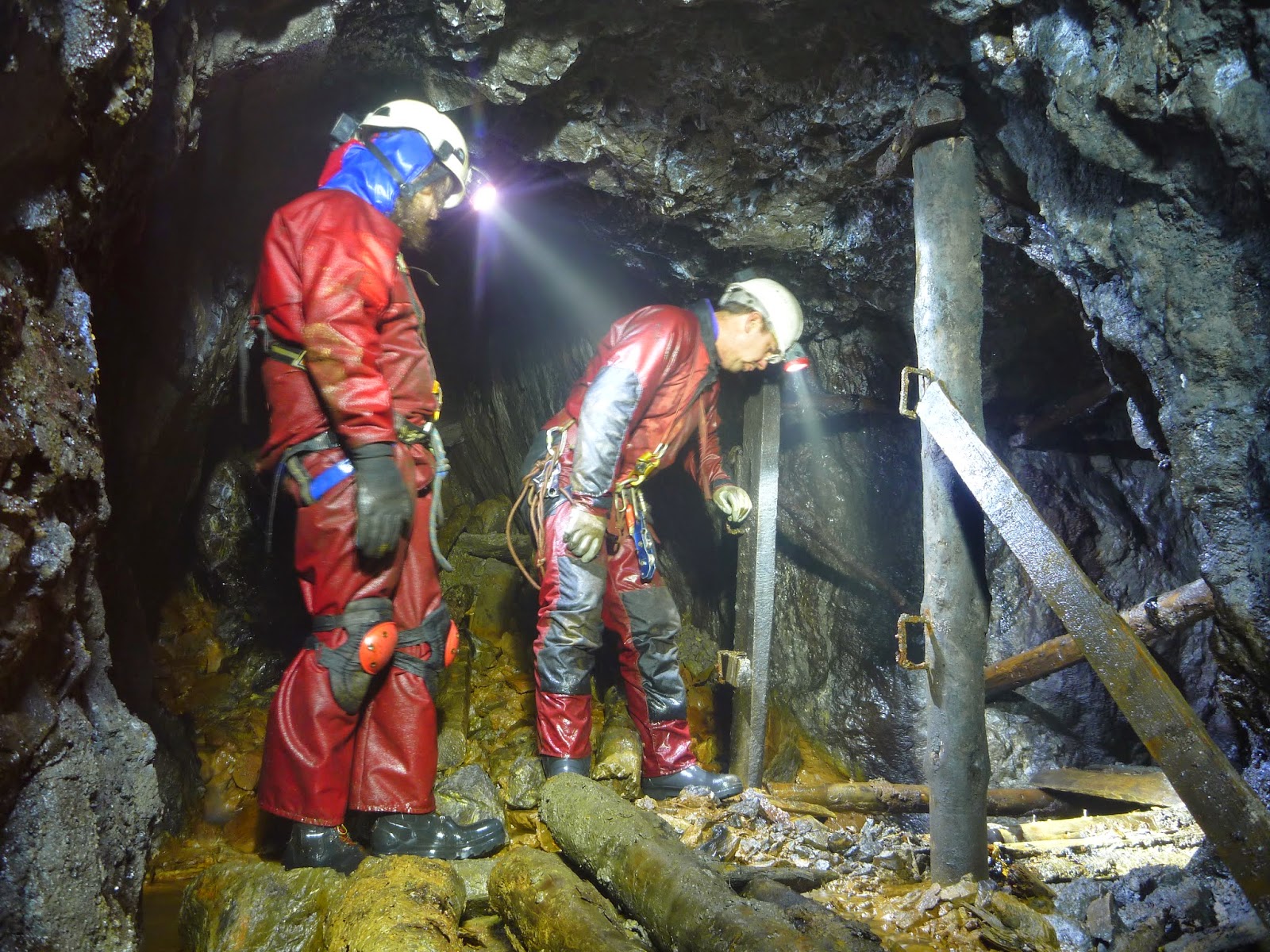 Only three of us (Phil, David and me; just like last time) were keen to venture on. Not everybody likes such amounts of cold water. But we went in, and on. It went! It went quite a way. We found a shaft going up; would this be the one David had dropped weeks earlier? It sure looked a bit dodgy. It did have a separate ladderway. Quite a shaft! We moved on. We explored some side tunnels that didn't go far, and went on and on. After a while there was a Y junction. To the right was a dead end; to the left, there was some stoping. With ladders! Tempting! We went all the way to the end, and then couldn't resist the ladders anymore. We went up four specimens. Solid as a rock! But it ended up in a very rainy shaft with no more ladders. There were platforms, and they were probably solid, but it was hard to see with all that water coming down. And there were people waiting for us. We went back! 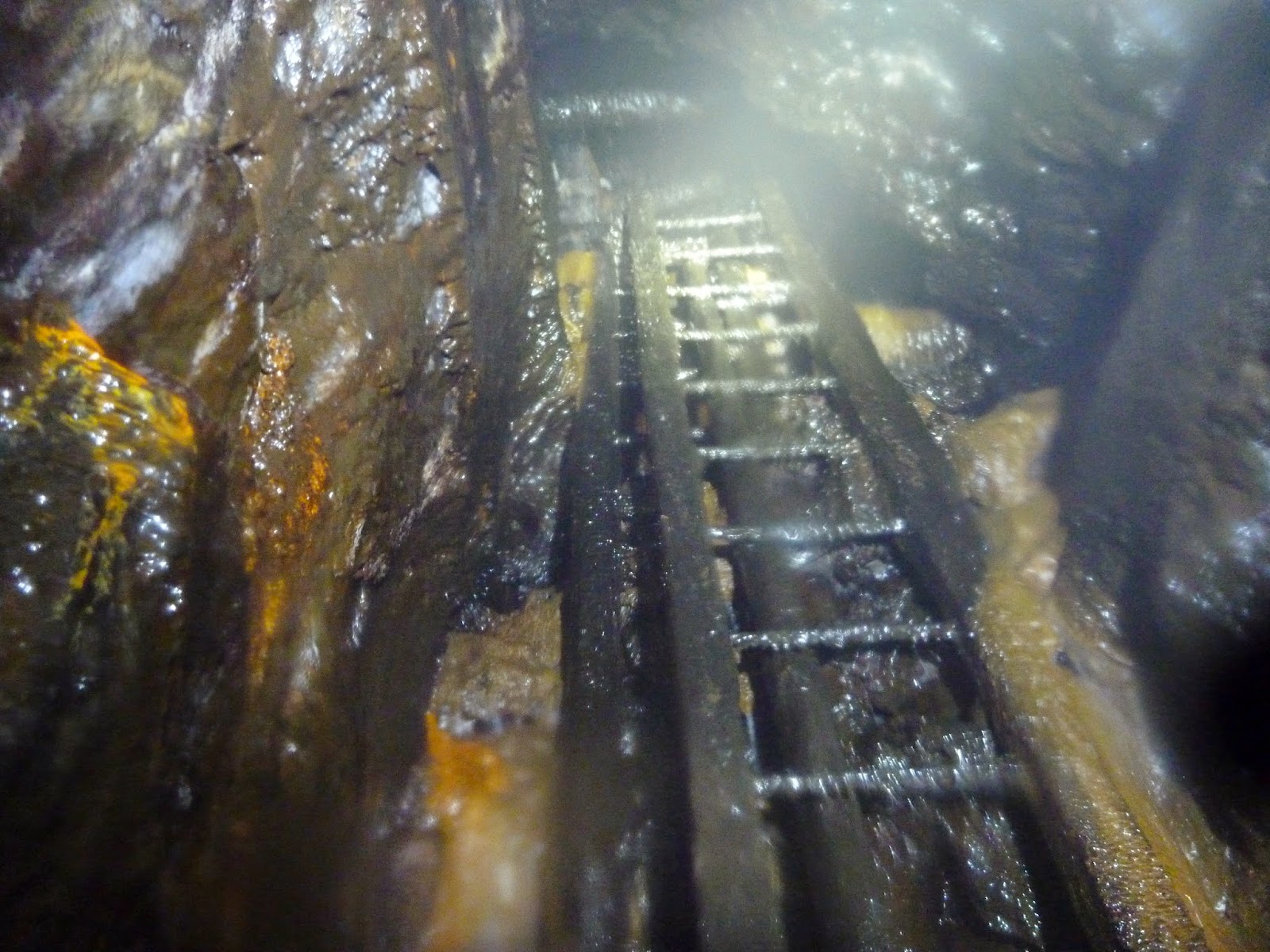 Some of the ladders were leaning against each other; maybe they had originally lead higher up, but been retired.

On the way back we also clambered up a ladder I had partly climbed the previous time; this time we went all the way up. It was a bit iffy up there. We went out.

David had gone ahead, and I followed. Coming around the corner I was suddenly faced with the soles of his boots. He was happily bobbing horizontally in the water! And why not. I grabbed him by the shoulders and pushed him in the direction of the exit. I think he quite liked this new mode of transport. Next week we'll go further down; I can barely wait!
Posted by Margot at 08:49