Visit of the YCC

Everyone comes to North Wales! Only weeks ago we had the PCG visiting, and now it was the YCC's turn. Or more accurately: the YCC, NYMCC and CMHS. Such a mix makes for interesting banter: the CMHS accused the YCC of consisting of mindless sports cavers, while the YCC accused the two other clubs of being softie mine explorers. There is some truth in both statements, actually.

All Yorkshiremen and -women arrived on Friday evening, but I was still swamped in marking and could do without a late, probably alcohol-fuelled night, quite possibly followed by a short, snoring-disrupted sleep. So I would arrive Saturday morning.

I got up early, packed my stuff, and drove down. Near the hut I bumped into three of the men who were heading for a cafe for breakfast. I proceeded, and soon reached the hut. Full of old friends! Very nice! Everyone was either getting up or faffing round with breakfast. I settled near the fire with a mug of coffee and was not bothered at all that we wouldn't be underground anytime soon.

After a whole lot of discussion we decided that the three running club members would go for a run, and everybody else would go to a gold mine a bit further south. So we packed ourselves and our stuff into two cars and waved the runners goodbye. Soon we were at the designated parking spot. We walked through a beautiful valley to the entrance. We saw a rope; there were more people here! Oh well, no need to have a mine to yourself. 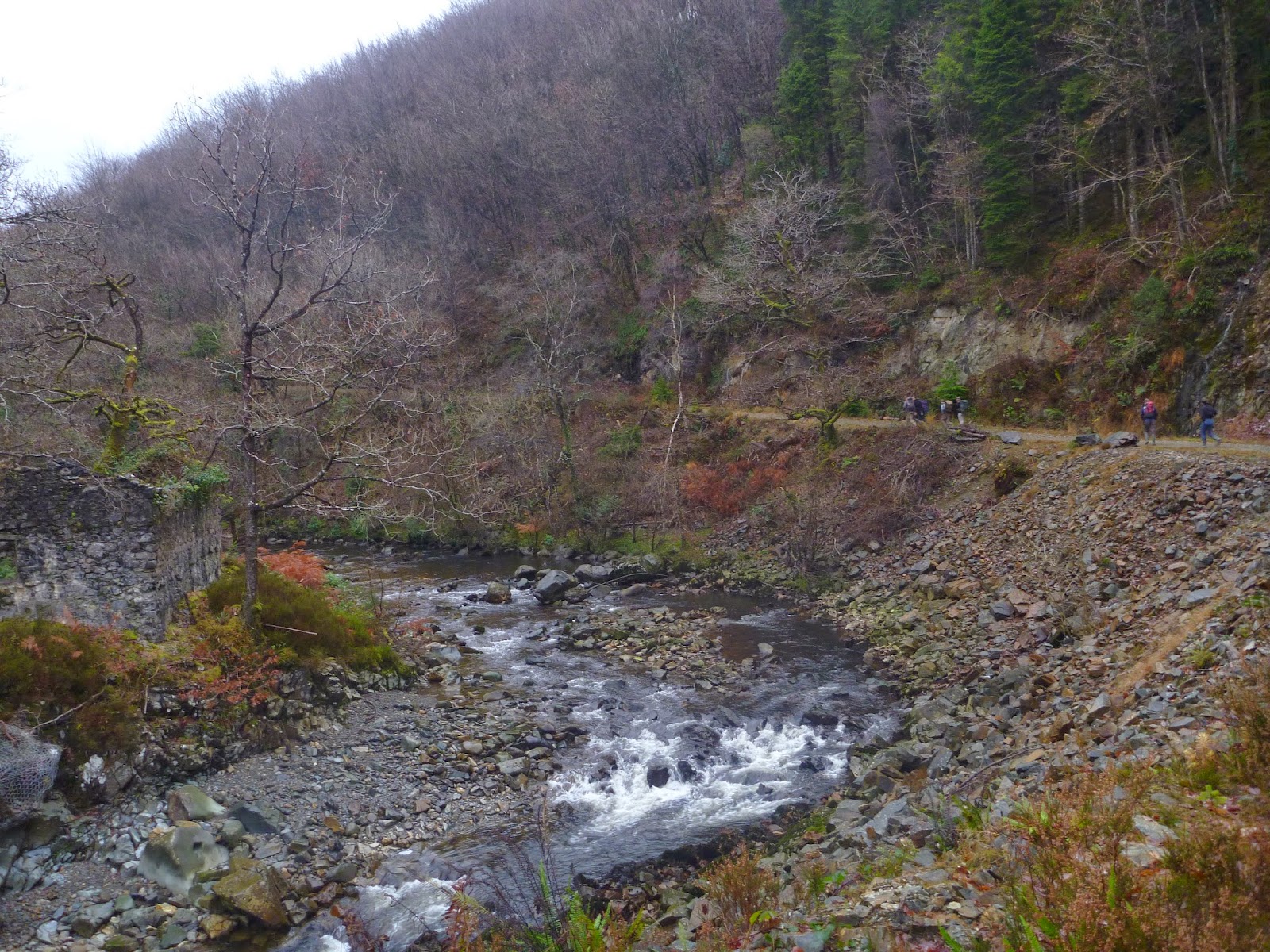 It was a beautiful walk to the entrance!

We went in. It was rather beautiful! It had funny colours and irregular chambers and rusty carts and forests of timbers and whatnot. Where we had come in was the old part of the mine, and it showed. Within minutes all the cameras came out. There were many!

We leisurely pottered through the mine, taking lots of pictures, and checking out all corners. And soon it was time to go into the newer part of the mine, with lots of abandoned ventilation ducts, electricity cables, steel ore chutes and whatnot. There we also found the other group. Lo and behold, it was the same group we had encountered during the PCG visit! Funny, that.

We happily pottered on, taking more pictures. I knew most of the photographers we had with us were better and better equipped than me, so I had ceased taking pictures. I would wait and see what the others would come up with! (Maybe more pics will follow!) 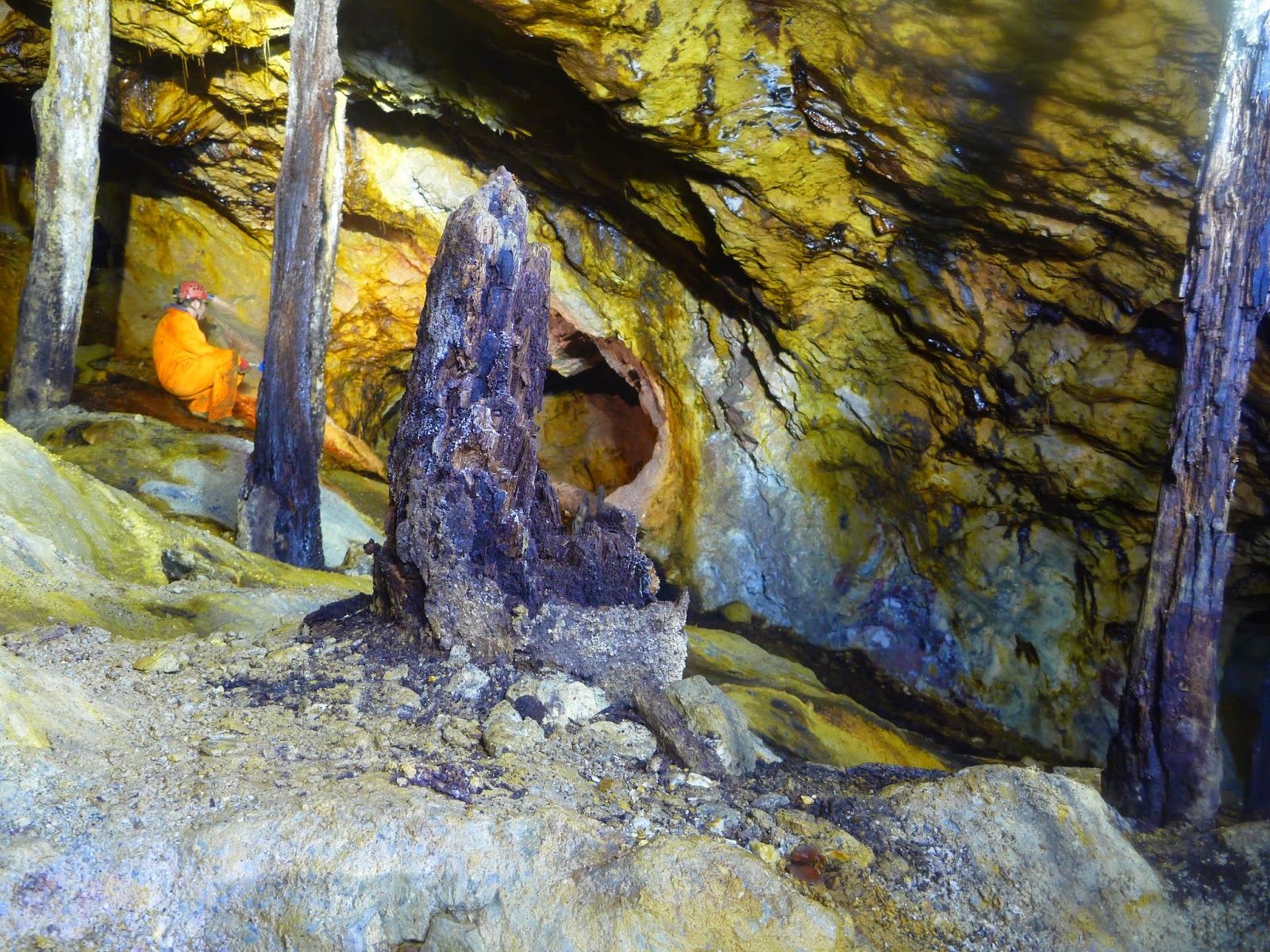 Orange man in orange mine


After a look in the modern part of the mine we headed back up via a different route, and came out in fading daylight. The walk back to the cars was scenic if not a bit dark. In convoy we drove back, but we saw the other car turn onto the pub car park. We were more interested in food than drink! Especially me; I had initially planned to stay the night, but had changed my mind. I would go back tonight. So not much booze for me!

Upon return to the hut we found it dark; the runners were also in the pub. Oh well! We just had some calm and snug time with food preparation and some chat. Good for me! Although we all were hungry, and hoped the pub contingent wouldn't stay away too long. We wanted dinner!

When they arrived we could tell they had appreciated what the pub in question had to offer. The mood immediately became rowdy. And pretty much everybody knows how unpleasant it is to be sober among the drunk. (Everybody who had travelled in the car that had come straight to the hut was pretty much sober, but we were seriously snowed under by the rest.) I needed some food, but I was keen to bugger off as soon as I could! Food was served late. I managed to get away shortly after 9. And it was no minute too soon! I needed fuel and headed for Caernarfon where I knew a petrol station, but I bumped into another one on the way I had forgot about. And I was the last person to get fuel before they closed! And they said the one in Caernarfon closed at the same time. A close escape! I probably would have made it home but it wouldn't have been relaxed driving.

I hung out my kit, unpacked my bag, had some tea and went to bed. I was glad I had left! This way I had a chance to get some work done on Sunday. But it had been a good underground trip! And maybe I find time next turn to visit Yorkshire, instead of only coming out when people visit me...
Posted by Margot at 09:42