Office christmas parties! Few parties are as infamous. But I always go; it's good to have some social time with colleagues. Sometimes they are fairly boring. If it's in Norway, they may be a bit too interesting. I didn't know what to expect in Bangor, but I can do with a bit of social integration at work, so when there was mention of a christmas do I bought a ticket. I hadn't checked what day it would be on; I assumed a Friday. It turned out to be a Thursday! That was sad; I would have to skip an underground trip! But well, I was committed now.

At a quarter to six I put on a cubic metre of GoreTex and biked to the mainland, where it all would take place. I took all the GoreTex off again and got my glass of champagne, and mingled with the crowd. I felt underdressed! There were ladies in elegant dresses, gentlemen in three-piece suits, and whatnot. I knew there was a ceilidh coming up, and biking home, so I was rather pragmatically dressed. Oh well!

Shortly after 7PM we were asked to proceed to the dinner hall. And it looked great! Shiny colourful tat as far as the eye could see! We sat down, put on a silly hat, and inflated balloons. For decoration? Of course not. They were designed in such a way that if you inflated them, didn't tie a knot but let them go, they would fly rather far while making a silly sound. Now that got the party started! Scientists are all very serious and grown-up people. 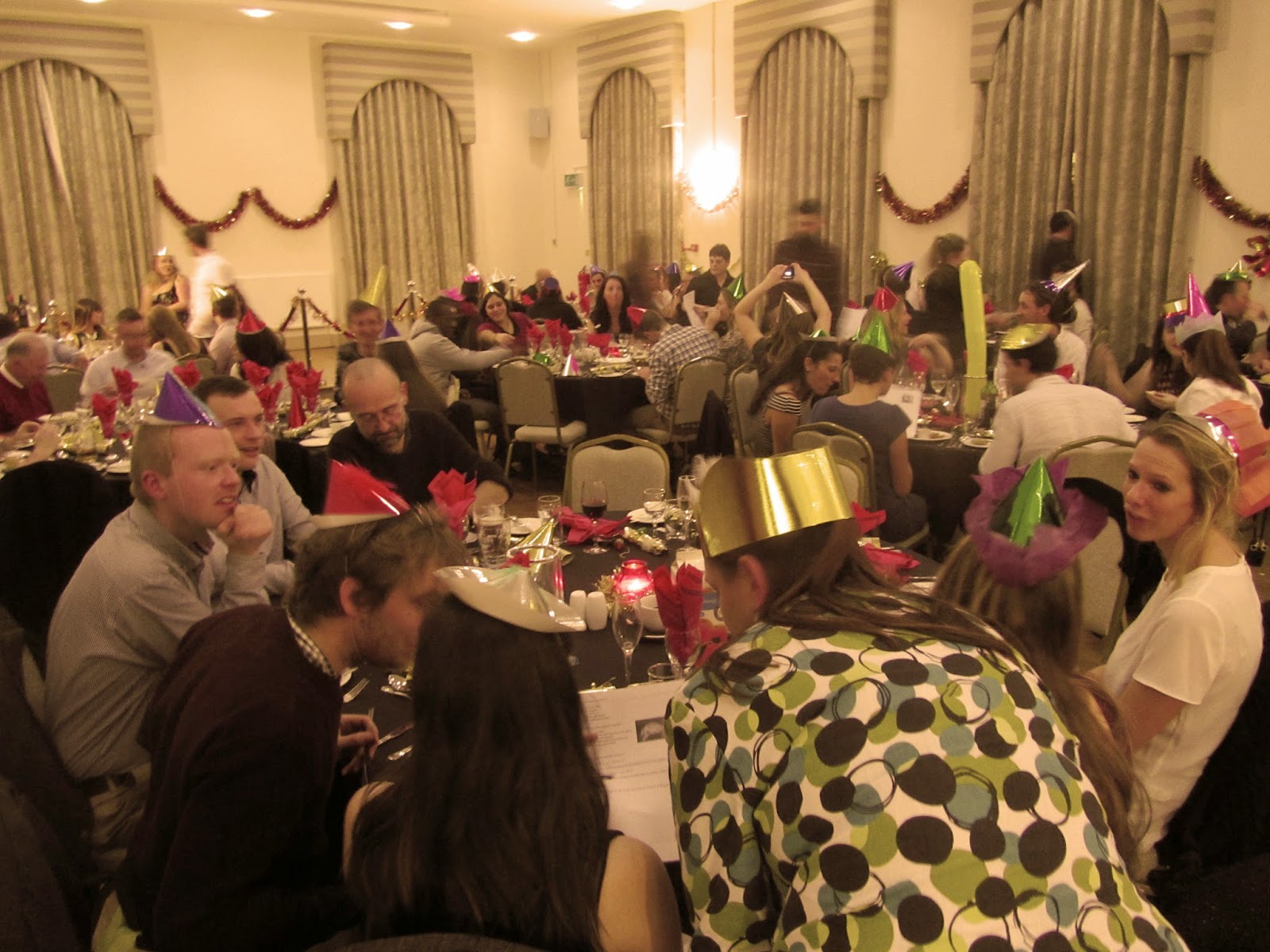 We also found a sort of a pub quiz on the table. It was very Ocean Sciences-themed. It involved lots of wave physics, fish physiology, and then some christmas nonsense. Also good for some fun. And even though we had a leading wave scientist at the table (who attracted a lot of attention from people from other tables who wanted to plug into his knowledge) we didn't do very well. But first there was food. It was good!

We were second last in the quiz, but there was a raffle too; I won a voucher for a local restaurant I hadn't heard of yet. Always nice! But soon we had to vacate the tables; they had to be moved aside for the ceilidh. We went back to the bar! And then back to the dining room for some dancing. There was one chap in a kilt; he didn't need a caller, and was on the dance floor during the sound check. Soon the band was ready for the real thing. Pretty much the entire population joined. Not much space! Lots of shoving and tripping on toes followed. But it was fun! I danced with my office mate Juan; it was good I had done ceilidhs before, as you can't automatically assume a Puerto Rican knows what a do-si-do is. Now he does! It was fun.

Fun is one thing, but I was rather aware of the next working day. It would be another day of student presentations I had to mark, and then some more marking. So when there was a break in the ceilidh at around 22:30 I sneaked away. Back into the GoreTex. I later heard some people had partied on until 8AM. Not for me! But this had been a good party! And the underground trip that night turned out to have been cancelled. Good food, a few drinks, silly balloons, and some sweaty dancing. With well-dressed colleagues! Hopefully a harbinger of more social interaction with the lot in the new year!
Posted by Margot at 08:48