Six tonnes of mud is enough to keep any palaeoceanographer busy for a while. I personally don't need to be kept busy at all; teaching is taking care of that. But we had both a Bangorian M degree (no, I'm not entirely sure what that is either) and a PhD student on the boat, and they had less distractions from research, and should be getting on with our cores. They are being kept in Edinburgh. It was clear a road trip had to be undertaken!

The organisation went a bit haphazard; James suggested a trip with all four of us, but then couldn't make it, and decided he needed Catriona the PhD student for a practical, and then decided his panacea-provider Guy should join, but oh wait these cores are bulky and we'd need a van, and these are always only three-seaters, etc etc. In the end it was Catriona, Guy, and me going, and leaving Zoe the M degree student and James behind. A most workable compromise, I'd say. The van was booked, accommodation in Edinburgh was booked, the BGS expected us, all was sorted. And then James came into my office. When we had come back from the cruise we had not managed to fit four persons plus five persons worth of luggage in the rental car, and a big trunk full of boots and waterproofs and hardhats and whatnot had been sent to Durham, along with the cores. The idea had been that James would pick that up on his next visit there, but amongst all other things occupying his mind that had slipped through the mesh. Could we perhaps drive past Durham and pick it up...?

With another 1.5 hours of driving added to our already rather substantial road trip we set off on a Thursday morning. The trip north would be the easy bit: we only had to get to the BGS in time to load up the cores. The way back would be more convoluted; to Durham for the trunk, then to Liverpool to drop of one half of all the core sections we had collected (we share them) and then finally home. I was really glad to be dragged out of my office for two days; the relentless pace of term was getting to me and I was on the brink of collapse by the end of Wednesday. But now I had no choice but to relax a bit in a van for hours on end! Excellent.

Guy might have noticed my fatigue and drove single-handedly to Edinburgh. Very kind of him! We got to the BGS at 15:30ish. The receptionist phoned our contact who appeared immediately, directed us to the loading bay, where Jenny and Claire the cruise-BGS-ladies also showed up, and minutes later we were loaded up. Success!

We were now not in a hurry, and went to have a cup of tea with the ladies. It was nice to catch up! And afterwards I had another social encounter in mind: printing a map that morning had made me realise that the BGS was only two buildings away from where my old PhD supervisors, Dick and Simon, work. Maybe they were in! I know the way to Dick's office. It was open! He was in! It was good to see him again. And he's a gregarious man, so Catriona and Guy were also glad to meet him. Simon wasn't in, unfortunately.

After this surprise visit we went to the hotel, checked in, dumped our luggage and gathered to go into town for dinner. We wandered around a bit first; Catriona and Guy wanted to buy some local delicacies for the home front, and I hadn't worked up an appetite yet since a rather heavy lunch on the road. And after successful shopping we had a pint. Why not! And after dinner we had a nice whisky; one is in Scotland or one is not! I went for a very old Islay. Lovely. But then it was time to go home and sleep. We were all tired. And the next day we wanted to set off early... 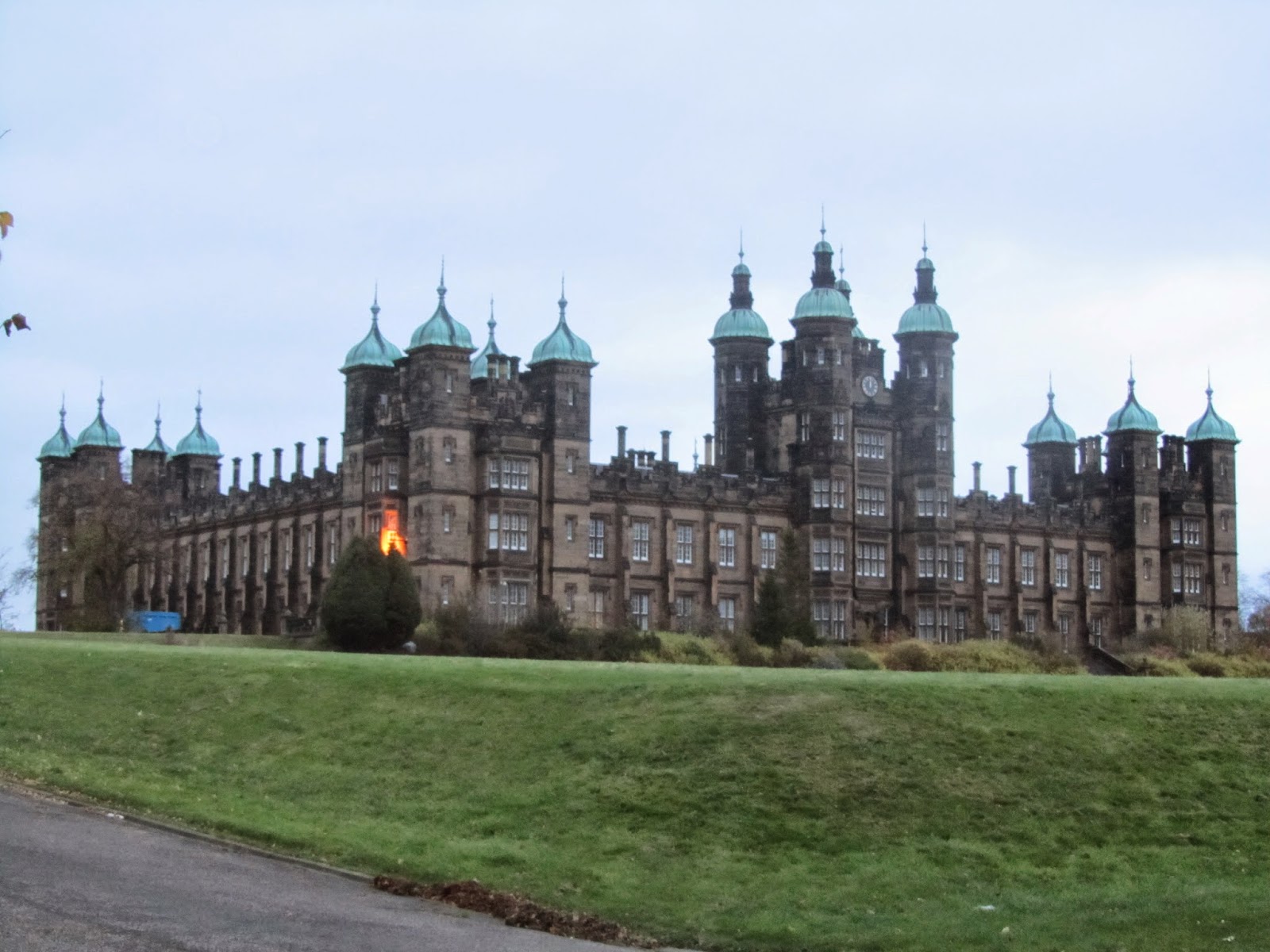 Our hotel was on the same street as this impressive building!

Edinburgh castle all pink on a black hilltop

We gathered for breakfast at seven, and were off before eight. And just over three hours later we were in Durham. The roads along the east coast are narrow and winding! But very pretty. It was a nice trip. And in Durham we found Louise, who was in charge of the trunk, in the coffee room. And Casper, the cruise Dane, too! Lovely to see them again.

We first had a coffee. Then we retrieved the trunk, and I briefly caught up with long-time colleague Tasha. And then we hit the road again! Liverpoolward we went. Through awful traffic. It took us a while; we only got there 15:45. But only minutes after arrival we saw Richard appear, who gestured us toward an improvised loading bay. And we started splitting the cores. They were split, of course, but the separately wrapped halves were taped together, and we had to now undo that. With all 69 sections!

We were a well-oiled splitting machine, and soon we could go in for a coffee. I went to find Hugh, as I hoped to catch up with him too! I found his girlfriend too. And Guy had found Fabienne, an old colleague. All seven of us enjoyed a brew with the amazing view Geography in Liverpool has to offer. And when Fabienne, Hugh and Amy had to get back to work Catriona and I had a brief project discussion with Rich. And after a hug we hit the road. In the middle of rush hour traffic! 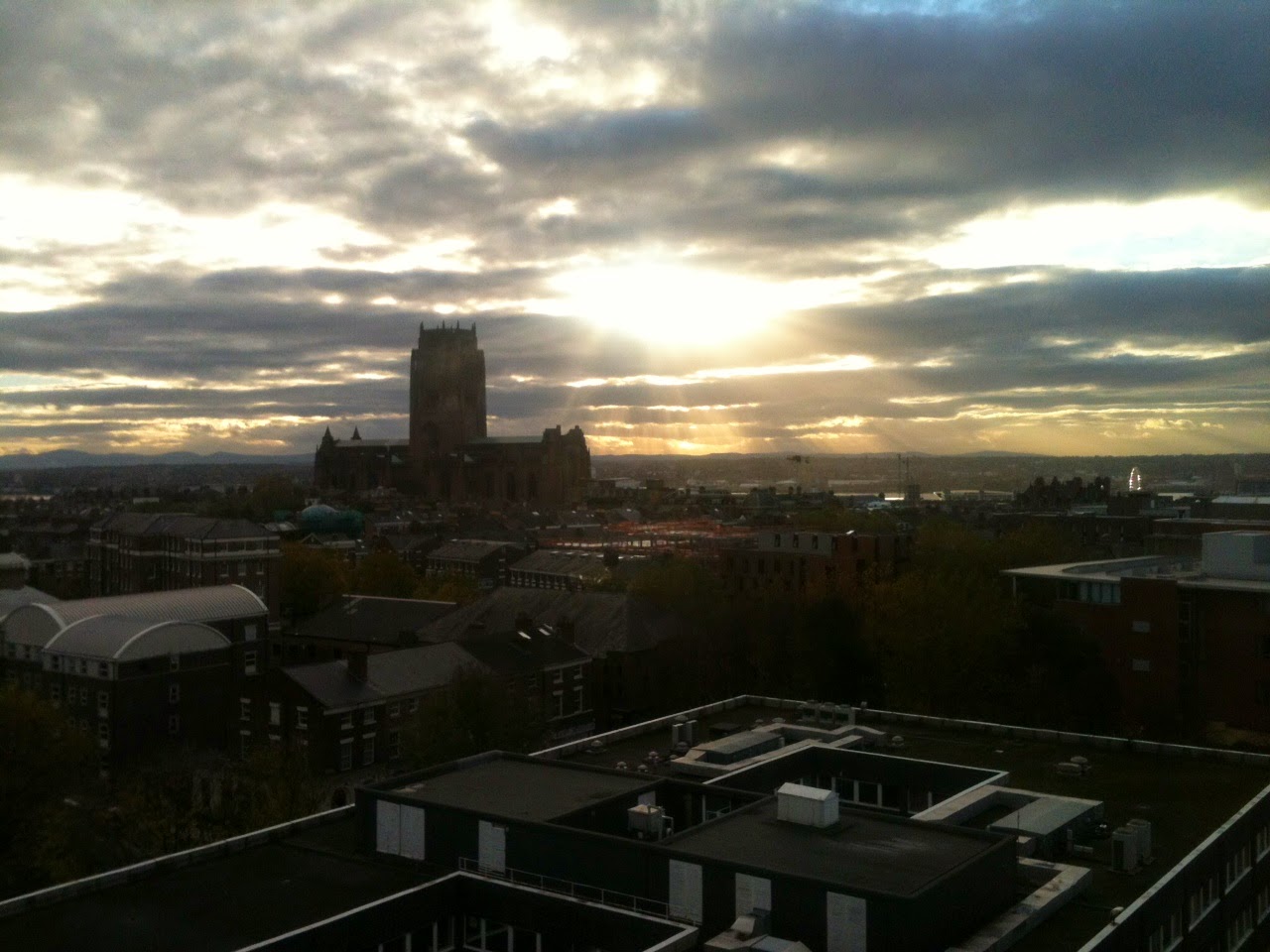 The view from the Geography coffee room, with the Anglican cathedral dominating the view

It got dark while we drove along the North Welsh coast. Along the way we had established that although there was a village fair taking place in Menai Bridge, and the School of Ocean Sciences is slap bang in town, we could get to the core storage. Fortunately! I swiped the door open and promptly set off the alarm. Oops. Forgot about that. But Guy managed to switch it off. It was not as if it made the village any more noisy!

We unloaded. Then Guy offered to bring me home. Bike and all! We now had an empty van, after all. That was nice. As we had stopped at a supermarket along the way as all that would be closed by the time we would get back, my bag was very heavy. So by 8PM I was home and could shove my newly purchased pizza in the oven. The end of a tiring but successful trip. We have the cores, they are in the right building, we have the trunk, and we've seen the BGS ladies, Dick, Louise, Tasha, some more Durhamfolk, Rich, Hugh, Amy and Fabienne along the way. Success! But I was due a lie-in...
Posted by Margot at 09:15