When not maypole, then slate

We had spent many a Thursday night sitting still, watching David be daring and executive. A fine way of spending the evening, but a subtle desire to, you know, do something ourselves too started to pop up in the rest of the club. So we left our maypole hotspot and went to the most obvious place. A slate mine! And not just any slate mine; Cwmorthin. There were some southerners around who wanted to visit it, and we thought it'd be nice to team up. David proposed exploring some flooded bits. I like flooded bits! And a few more did, so that was what we decided on. Some water-haters would go elsewhere. We'd be with too many to stay together anyway...

When I teamed up with David it became clear he had second thoughts about the swimming. Hm! It was his idea. And I had nothing other than my wetsuit to wear underneath my caving suit. I was rather committed, evidently! And when we got to the gathering place another chickened out: he had been jet-skiing and his wetsuit was still wet. That sort of left Phil, and he said he was ready for pretty much anything. We'd see!

David had a plan: some wanted to see some new rigging, so he suggested we see that first, and do the swimming later. It sounded like an attempt to make the swimming be cancelled due to lack of time, but it would indeed be best to do the swimming last! So I agreed and we all went. Almong the way we bumped into the owner, who mentioned some more new rigging he'd put in. We would go and have a look!

The first bit of new rigging was along a slippery traverse. I don't mind that kind (it's rifts I don't like!) so I scampered along while David put his harness on. I realised once I had started I was using the old rope; a bit of a waste of the brand new rigging. Oh well, it held too! David followed my example but regretted it. Only one more came along; Hamster, one of the southerners. The rest didn't like the look of it. No problem; we'd reconvene lower down in the mine. 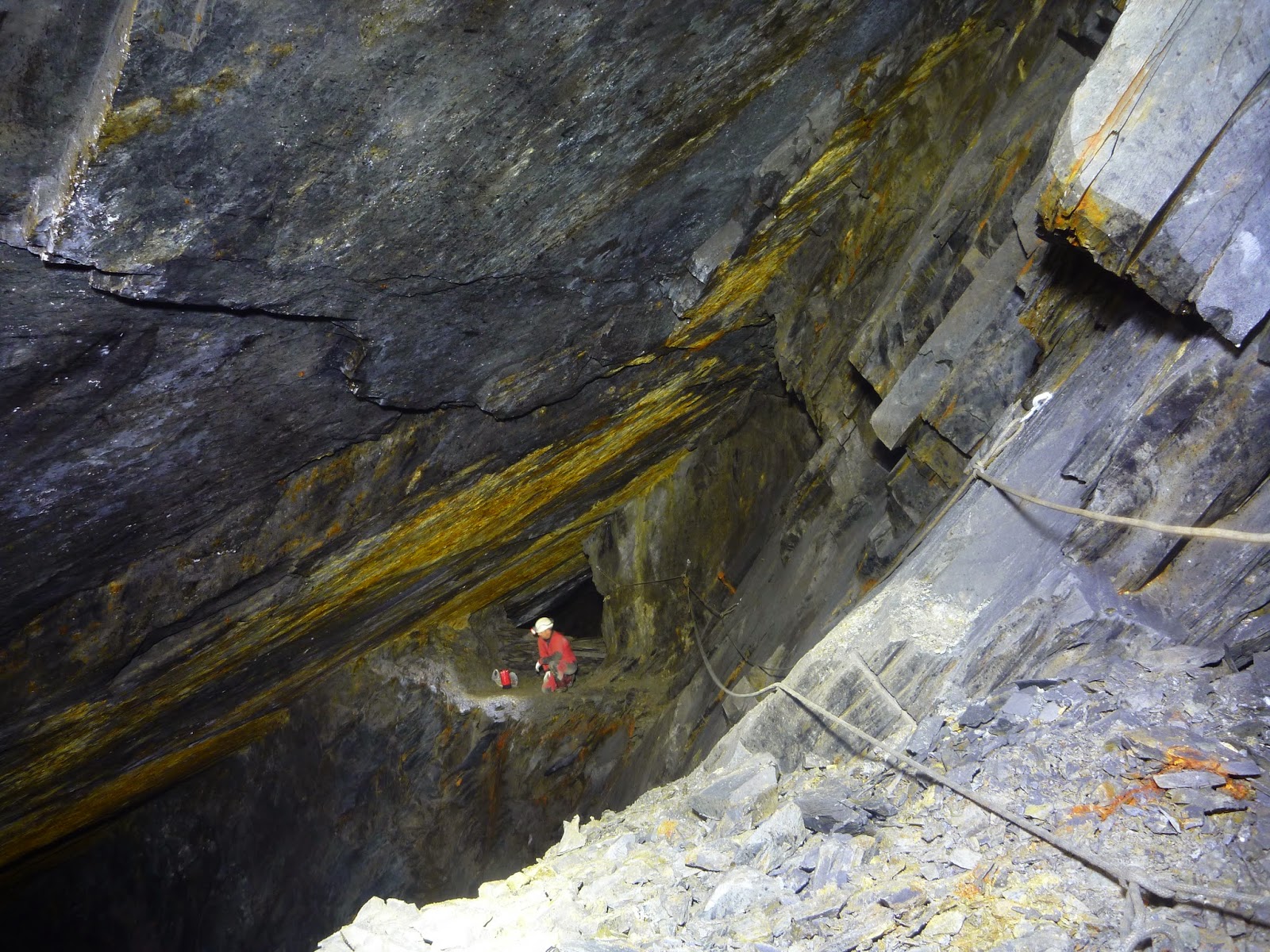 The next drop looked like a one way trip; David and I had no full SRT kit on us, so while we were alright sliding down ropes we'd have trouble get back up. This route better lead on! But it did. It was a nice drop. And a while further we indeed saw a familiar figure come down in incline. We had found the rest back! And we agreed on doing something called "the corkscrew". I didn't know about it, but it sounded fun. And it was! It would have been nicer to do the climb in an outfit less restricting than a full winter wetsuit, but hey ho. And it was followed by another daft traverse and then a balancing act over an old bridge. Fun! 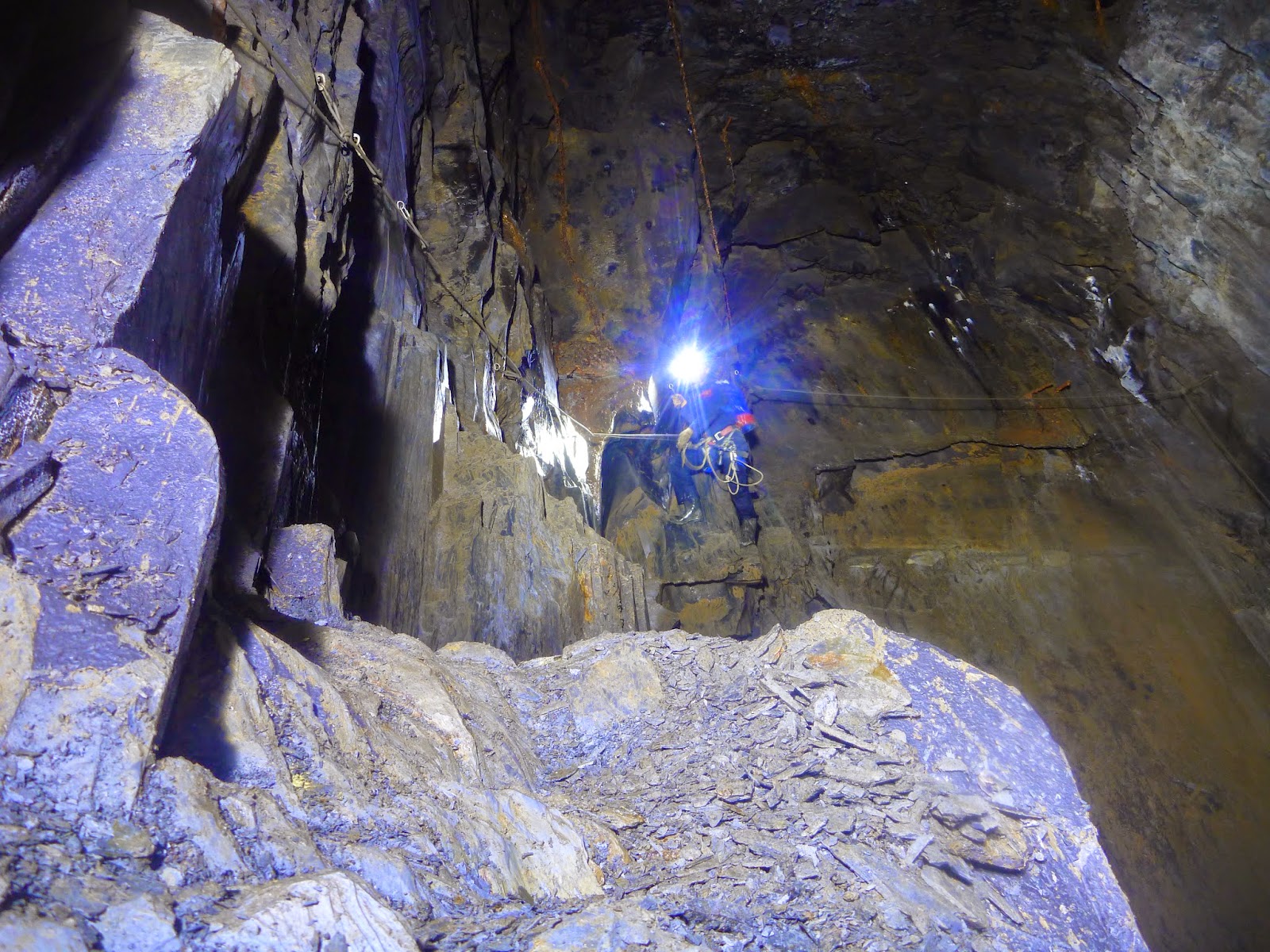 The left-hand bit of the corkscrew, with Hamster modelling 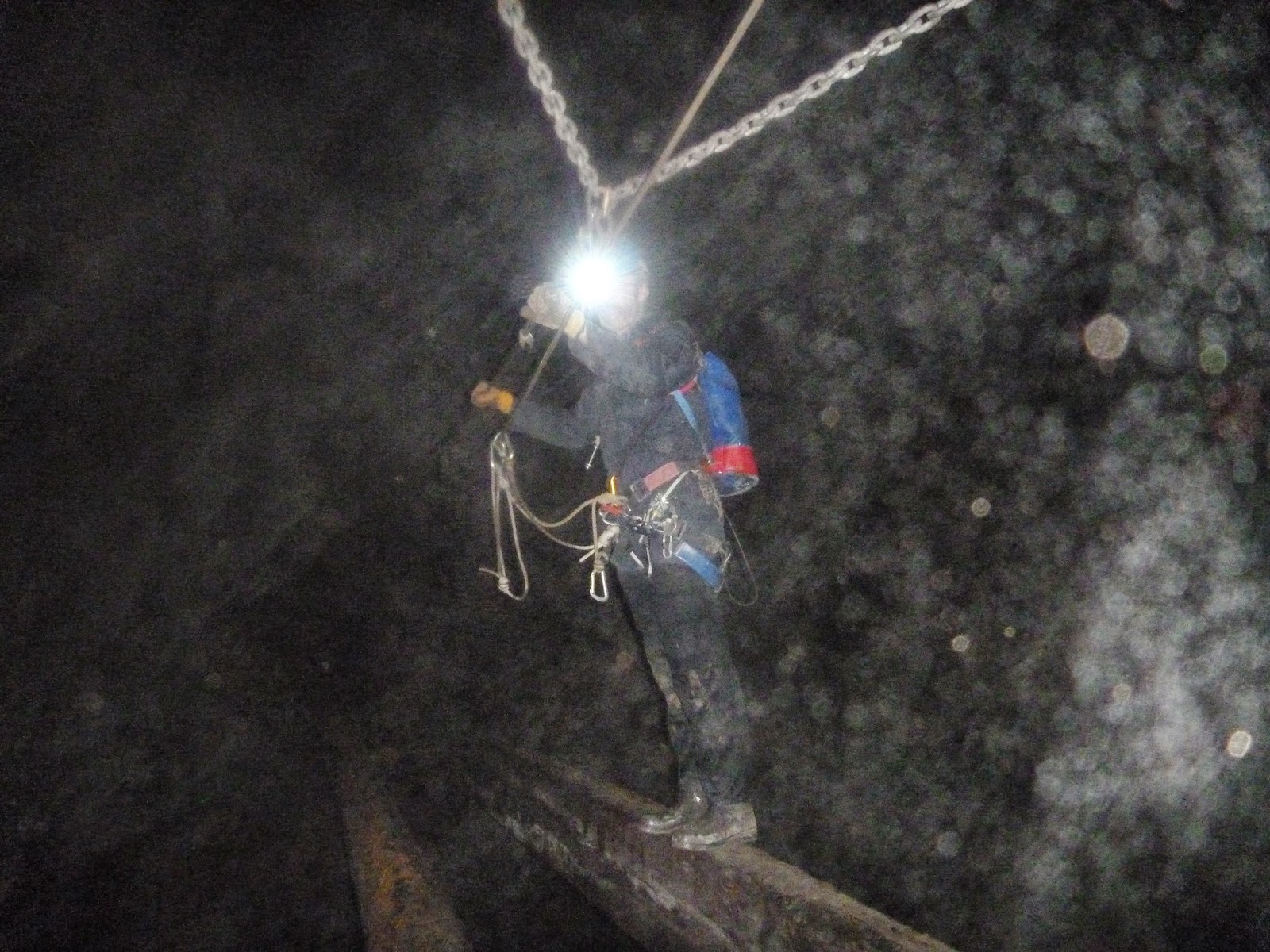 Hamster, again, this time on the old bridge

We later scampered up another slope with some unknown rigging. It became clear an active policy of swimming-avoidance was exercised! But I wasn't having that; I didn't want to have climbed the corkscrew in neoprene for nothing. Give me that swim! And yes it would get late, but then I would just scoot off and not join for the usual Pingu cake session. David had already secured himself a lift with the other Anglesey-bound car! No way he would sacrifice cake to sleep. But so the swim happened. David and Phil changed into neoprene. And gave their bags to others; we would first go through a sump, and they didn't want their kit to get wet. Tsk!

When we got to the sump we soon found out it was a doddle! Just a few metre wade through not-too-deep water, with plenty of airspace. We walked on. And a while later we came to the actual swim. We hoped it would reach several flooded chambers. But it didn't! It only went a few metres. So much for a swim-based trip. Oh well! But now we had to wait until the others arrived with the men's kit. And time passed and passed! Fortunately, David didn't feel the need to wait for absolutely everybody. He needed to get his clothes (and glasses!) out of my car; I couldn't just scoot off on my own. But once I had changed I left. It was already 23:30! And it was a good call; David claimed to have got home at 3AM or so. Way, way too late for me! It already was borderline, but I do think stuff like this keeps me going through busy times. Bring on next week!
Posted by Margot at 17:46