When I went to york I made sure I had a caving club lined up. And that was one of the best things I did! So I figured I'd do the same thing when coming to Wales. But north Wales is not like the Vale of York; there is a lot of underground stuff going on! There is the North Wales Caving Club, for instance. And the Great Orme Exploration Society. And the Parys Underground Group. And probably more than that! How to choose? I mailed a few to inquire. Some we a lot clearer about their activities on their websites than others. It's quite clear where the Parys folk go: to Parys Mountain. But the North Wales folk? That could be many places.

Mailing around revealed that the Parys men were quite happy to welcome me from the start. The Great Orme people held off a bit. The North Wales people were very welcoming, but revealed they do a fair bit in eastern Wales: too far away from me. But they seem to have a western branch, and I was explained how to find them.

Then I got there. The first week I was busy getting the house sorted, and I had a massive cold in addition to that. (I always get a cold when moving house; I just take too much on.) So I didn't go underground. But the next week the time had come! I decided to start with Parys Mountain.

I drove up to the very easy to find parking lot. And soon after two more cars appeared, that turned to contain to PUG men; Lionel and John. And to their surprise, no more cars appeared for a while. But what did appear was a mountain bike with a lady on it. She asked what we were up to; when we said we were going underground she started jumping up and down in enthusiasm. So we asked her along! The PUG turns out to have quite a collection of boiler suits and wellies and whatnot. So she phoned her husband to say she'd be a bit later and off she went with us!

I had already changed in the car park, as I think is the thing to do, but it turned out the PUG actually has a small cabin for this activity. So luxurious! And the entrance to the mine is in the cabin. They have it sorted out... 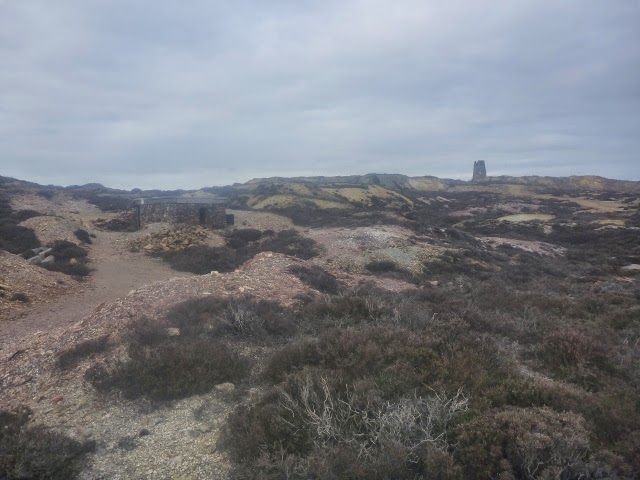 The landscape of Parys mountain, with the stump of the old windmill on the horizon, and the little cabin of the PUG on the left

We went down into the mine, joined by a chap called Ron, and saw the vertical bits of the mine tend to be laddered. Some of it with the original ladders! And the mine itself was beautifully orange and purple. It is a copper mine, but there clearly is a lot of iron in there too! And the puddles on the floor were Wheal Jane red. And Wheal Jane acid! The pH in this place is somewhere near 2 as well. And full of daft elements. I started to see why there were water bottles dotted around the mine; were one to get lost, one gets thirsty soon. You can't drink any of the chemical waste that drips and flows around there! But the snottites clearly liked it - there were everywhere, and they were huge. 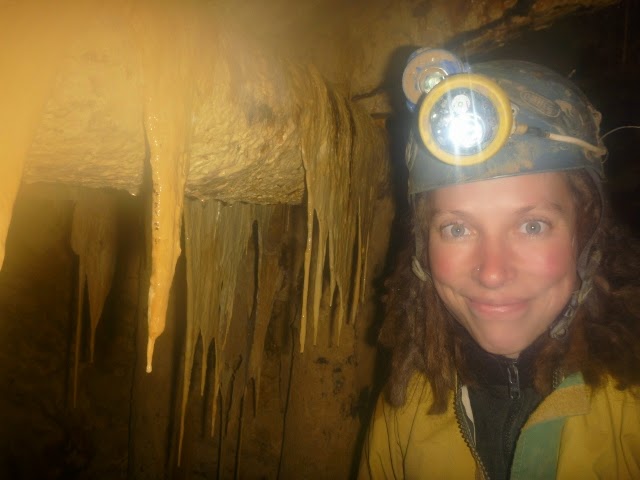 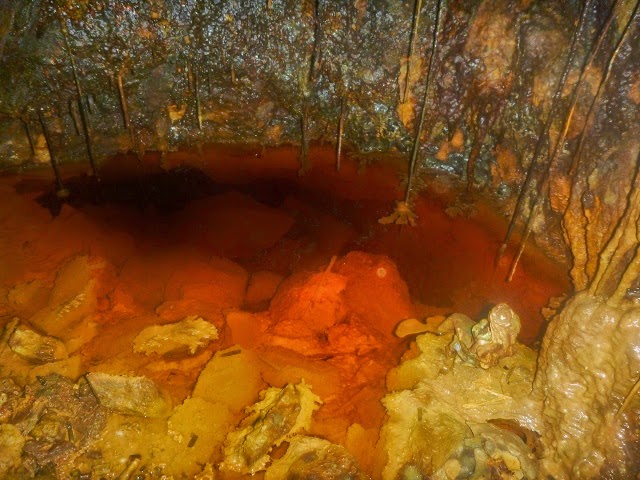 We didn't stay long. There was a committee meeting planned for later! So we scampered to an interesting archaeological site in the mine, admired the sheer age of the place, and went out. We changed, said goodbye to Ceri the ad hoc mine explorer, and went to the pub. There we were joined by two more men, and the meeting could start. It was nice to get an idea of what the club was up to, but I was acutely aware of the late hour I had gone to bed the previous day, do to the power issues; and the upcoming visit to Liverpool for which I had to be fresh. So I started getting impatient. At some moment I decided I knew enough. I apologised and scampered off! I just plonked my caving kit in the garage, not bothering to rinse the acid out. I wanted to go to bed! Hopefully next week I will get underground again, and this time without the after-cave stress....
Posted by Margot at 11:34