The men were absolutely punctual. At 7:04 I saw the lorry reversing onto the driveway. It may well have needed 4 minutes to get into that position! Soon the boxes and pieces of furniture were streaming into the house. I chucked some stuff into the garage, but still the house filled up quickly. After about an hour, it was all done. 8AM and the whole day ahead of me to turn this mass of boxes and dissembled furniture into a home! 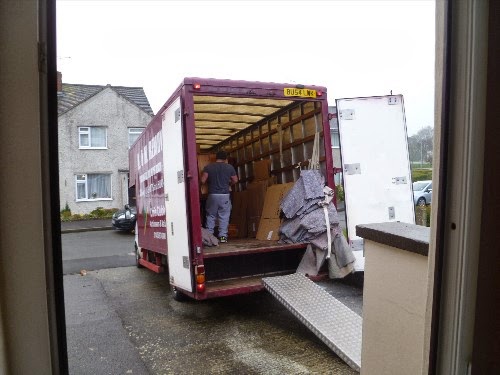 I started with the bedrooms. I figured that if I got them into shape, I could then put any excess boxes in them, thereby keeping the more important lounge free. And so it worked! The master bedroom could not be done entirely, of course, as it didn’t have enough furniture for my clothes, but apart from that it soon looked quite bedroomish. And the guest room too. Time to go and pick up the wardrobe! But not yet; the landlord would pop by in the morning, and he hadn’t been yet. I’d made a start at the lounge when there was a knock. There he was! I had agreed beforehand he would maintain the garden, but I had been a bit apprehensive about agreeing to give a total stranger access to my private space. But he turned out to be really nice. Excellent!

The shop chap was friendly and helped me put it on top of the car (it didn’t fit inside), which was great, as I could not have done that alone. I drove very calmly back to Menai Bridge, a bit nervous about getting it down, and into the house, on my own. It was a big, unwieldy thing! And it was hard, but I managed. Now I could hang up all my frocks and evening suits! And then have a go at the lounge. And then the kitchen. And then I decided it was time to go and buy some curtains. The house came with none, but has rather large windows. I only had one pair myself. Not enough! And on the way back I bought some food. I now had a working fridge again, so I could! But after dinner I was shattered. It was pretty much the end of the day. But one that saw an empty house turned into something quite close to a functional house! 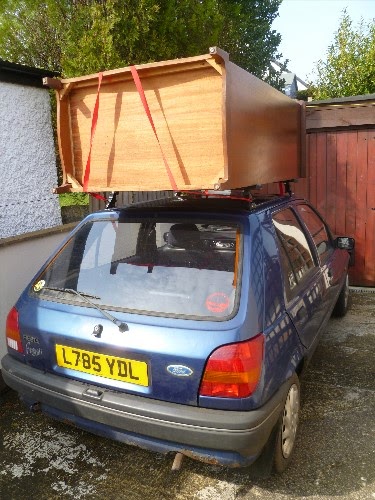 The next day was for unpacking the last boxes, wiring everything (like radios and TVs) up, trying to get online, re-configuring the bed (the removal man had put one junction upside down), trying the washing machine I had connected myself, without help from internet as I wasn’t connected yet; do another round of shopping, as by then I would really know what was still needed. The removal chaps had clearly not brought everything! Stuff such as a bathroom bin; easy to assume it comes with the house, but it didn’t. And I do want one. Me woman! Me want bin in bathroom. And with a house with wooden floors I needed a broom. All such things!  And by the end of the day I had the entire lounge (except things hanging from the wall) sorted. And the bathroom. And the kitchen (I had found the box with the glasswork!) And netting in all the windows (nice for some privacy!). And the garage looked a lot tidier. Another productive day! 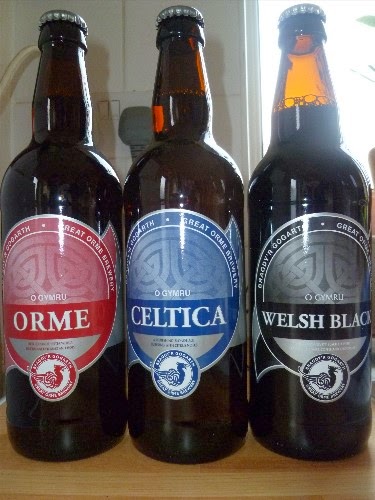 I made some new friends! I tried the middle one; very good beer...

I had one day left before I would have to go to work.To do list: change my TV licence, tell my energy providers I'd moved, get a GP, hang up the last curtains, go through the inventory with the estate agent, buy the last piece of furniture, assemble it and put things in it, tidy the garage, find the local fruit market, get my bike to the repair shop, and more such things. At the end of the day the garage was not as tidy as planned and I had not managed to locate my GP, but otherwise all was done! The only main thing now to proceed with was hanging up pictures. I have permission from the landlord to hammer nails into the wall, as long as I use small ones, and am careful... and decorating the walls will be the finishing touch!
Posted by Margot at 17:42