The struggle for broadband

Internet matters. I remember doing without. I remember the first emails I sent in university. I remember the dial-up connection I had in my little apartment in Amsterdam. But I also know I have good use for internet. It allows you to stay in touch with the myriad of people with whom you mainly stays in touch via forums and email. It allows you to phone your mum in an affordable way. It allows you to look up where places are, when they are open (if they are shops and such) and how you can get to them (fewer and fewer places are listed in the yellow pages!). It allows you to look up how things are done. How to replace the wing mirror of a car, how to repair your bike gears, how to wire a TV pug. I got myself broadband in York, and I liked it; it allows you to do a lot more at home. You don't want to have to go to the office on a Sunday in order to find out how to repair something! But of course, only 8 months later I moved house. I phoned my broadband provider to ask if I could move the contract with me. They said I could, but I would have to have a new connection made. Another man drilling through the wall to install a socket! She said she'd have a technician contact me to make an appointment.

I thought I'd better be prepared. I hesitantly brought up the topic of drilling through the wall with the landlord. He said there already were holes in it; for instance, there is a satellite dish attached to the wall. Did I want to use that? Well, no, I don't.So he grabbed the cable coming down from it and pulled it. He said we could use that. Just rip that cable out of the wall and shove another one through! So I figured I'd get ready for that. Let's disconnect that cable from whatever it was attached to, and check if it would move. And here comes the embarrassing part.

I traced the cable in. It clearly ended in a socket. It did look suspiciously like a phone socket, but hey, if the landlord says it's the satellite dish, then it must be, mustn't it? I regularly tell myself I should not be so easily lead; my instinct is to place too much weight in the judgement of others. It's one of the relics of my youth I am trying to get rid of, but it's hard. Maybe this episode will help...

Anyway. I took apart the socket and pulled on the cable. It moved! Good. So the wait for the technician could start. But nobody of that kind contacted me. I decided to phone my provider again, to see what the state of things was. The lady I had on the phone said I should be connected. I had a phone socket, didn't I? It should provide broadband. Hmm. Well, good news, but I'd liked to have known earlier! would it have been my daft Welsh address that had confused the other lady who had told me I wasn't connected? But anyway; it was time to re-evaluate my destructive work.

I walked around the house. That cable came from quite such a pole as where my York broadband cable came from! Oh dear. And the dish cable came out in another corner of the room. Oh dear again. I should not just believe people. Now I had naked wires sticking out of the wall and no idea how they had been fixed to start with. Note to self: when you take things apart, first take a picture so you can put it back together if necessary!

I still had slow wifi, so I did what I do in such case: I googled my issue. Which cable goes where? Of course I was bombarded with lots of information that wasn't suitable. That dealt with different models of sockets, different types of cable, different issues altogether and whatnot. I found something that looked like an instructive youtube video but my slow connection didn't allow me to watch it. In the end I found a site that seemed to give the answers I needed, but they were shrouded in warmings. The socket belongs to BT! It is illegal to tamper with it! Don't touch the wires! Use the right tools or you'll never make it work! I decided to give it a try anyway, and just phone BT to have them re-install it (at an estimated cost of £130) if I failed. I wired the whole thing up again and went to bed. 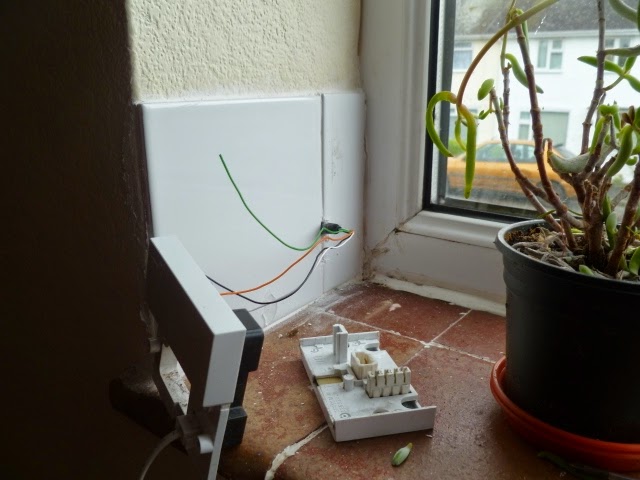 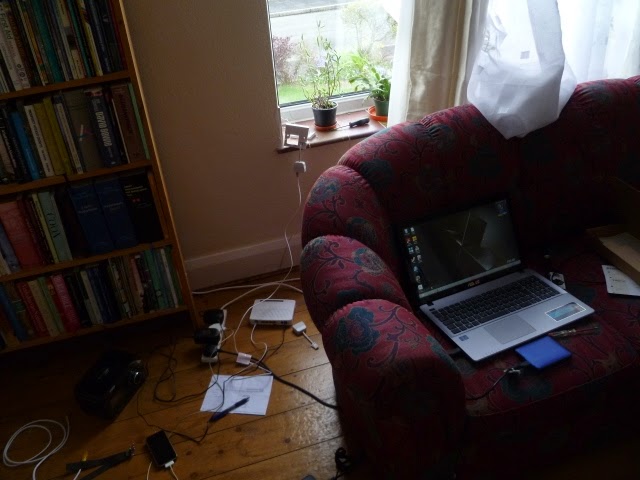 The confusion during the test phase

The next morning, with coffee and daylight, I plugged my modem in. The light saying "broadband" actually came on; a good sign! But my compute didn't want to connect. It claimed authorization issues. So I phoned the provider again. They checked, and said the problem was just that with a new address I had a new (theoretical) landline which the connection depended on. My computer was trying to connect to York! So she told me to reset the modem and then all should be well. Would it?

It would. I got my broadband back! So I took everything apart again, re-assembled everything in a neater way, and plugged the modem in in my bedroom, which by coincidence doubles as my home office, as there was a socket there too, and I figured the two must be connected. And it worked! I've been typing this wile being connected to the rest of the world. It didn't go the way it should have, but I have faster internet again! And I've learned a fair few things... 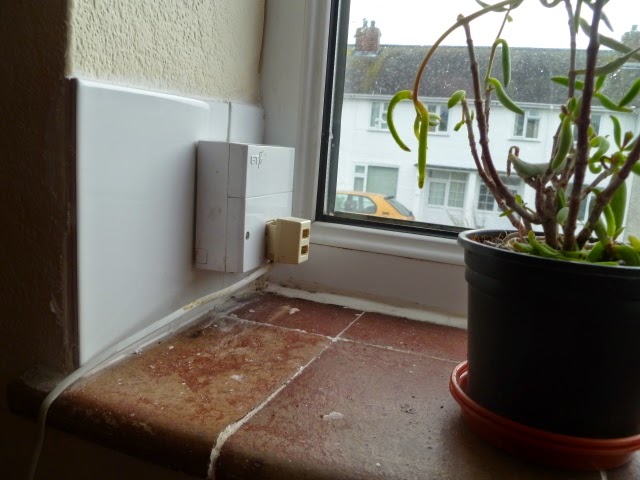 The much neater view when I had put everything back together to the best of my ability
Posted by Margot at 13:52