First days in the office 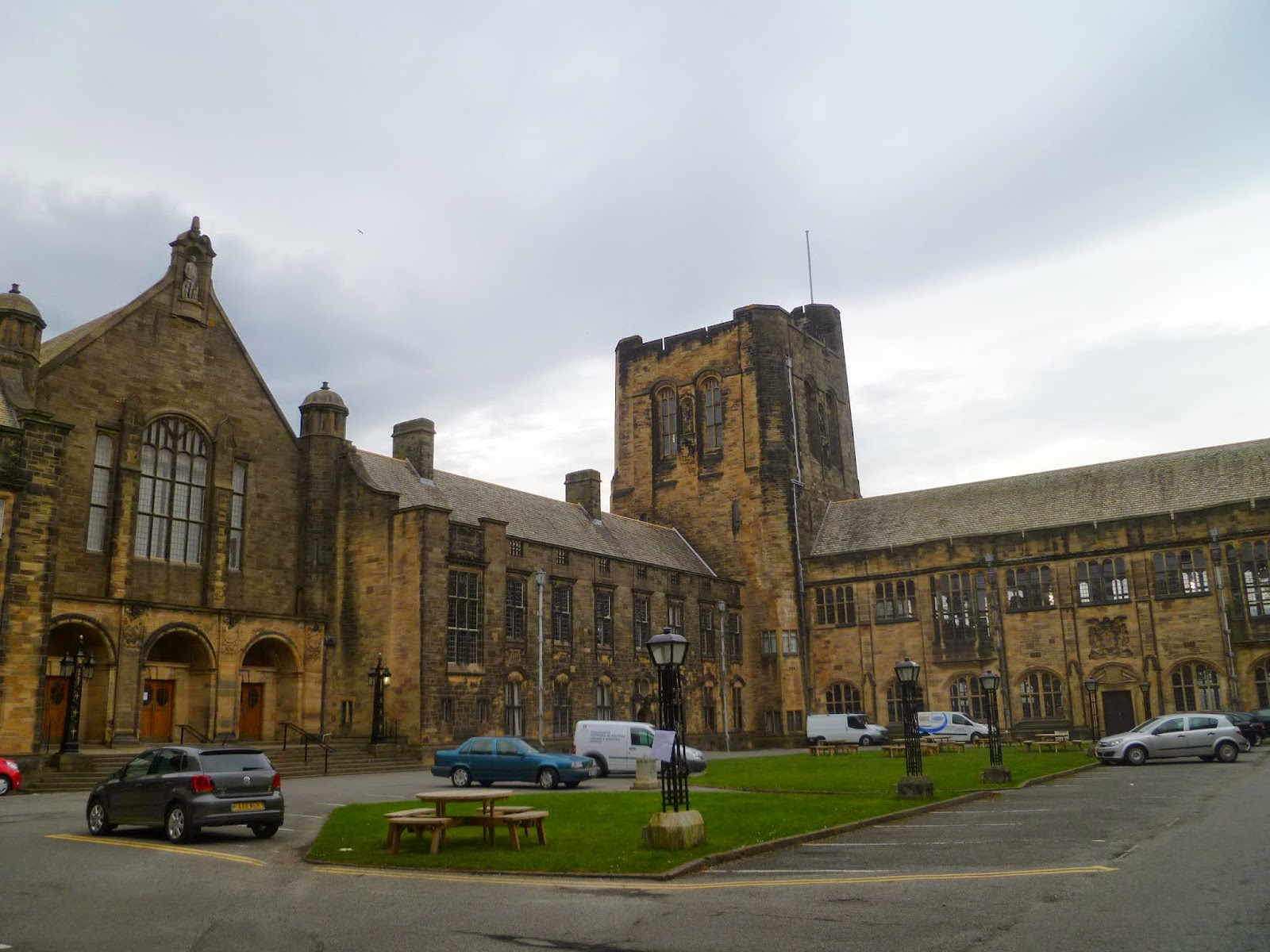 Academic pomp: the main building of the main campus of Bangor University

I knew my office was on the top floor, and I knew the name of the lecturer I would share with. And that was enough, as when I walked into the building I bumped into a chap with a bicycle, who was waiting for the elevator. I could have guessed he was Dutch, but I didn't, so In English I asked if he knew where the said lecturer's office was. Straight opposite his! So I followed him and ended up where I belonged. Or rather; in front of the closed door of where I belonged. But he knew who could be able to open the door for me. I was in! That was a start. 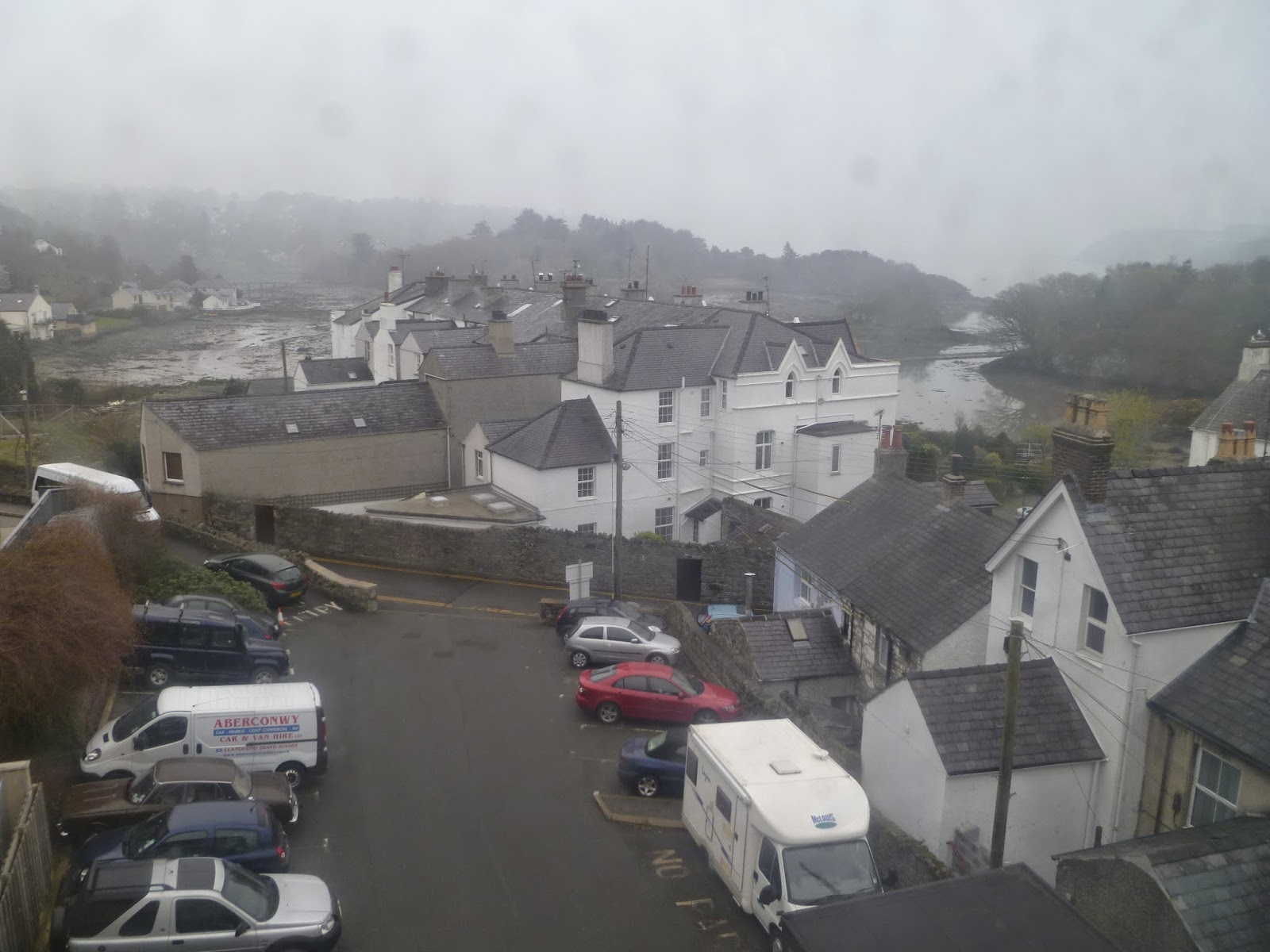 The view from my office window! You have to crouch to see this,  but still. And notice the dirt on the pane...

I started to assemble the new computer on my new desk. And I started to empty out my car. But I didn't get far; James showed up, and went around trying to get my computer set up, introducing me to people, showing me how things worked, and all that. And then dragged me to a poster session of the students. And once we got there, he plonked a sheet and a pen into my hand. Did I feel like marking them? Well, yes! So before my car was half unpacked I was already on teaching duty. After the marking I managed to quickly empty the car, after which it was lunchtime. James took me and Paul, my new office mate, who turned out to be a friend of Emma's, to a nearby pub for a nice pub lunch. Nice! After lunch, though, it became clear that that day, I wouldn't have a working computer, so I went home to pick up my laptop, and worked on that for now. 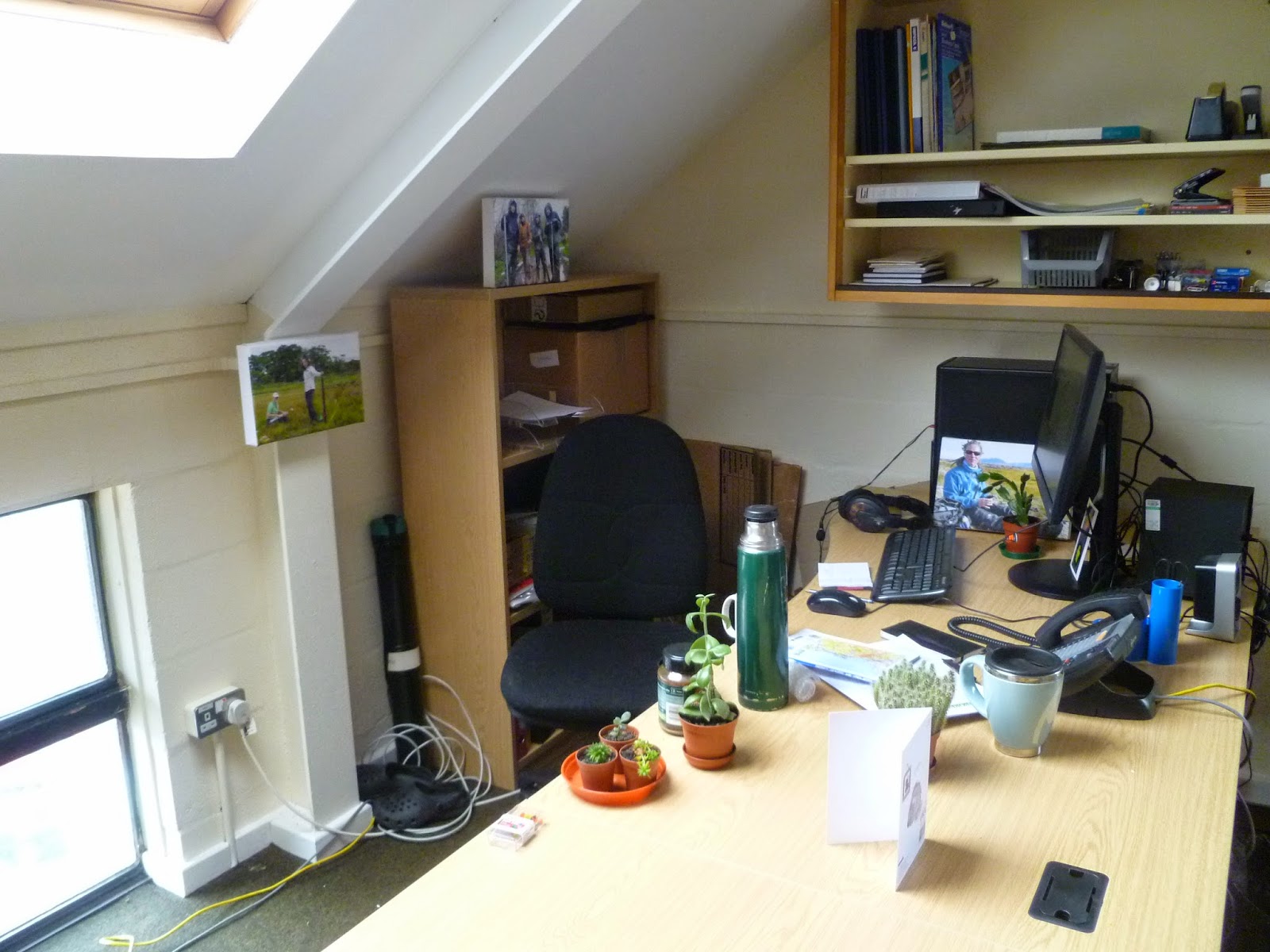 My new desk! all set up.

The next day was quite different; I was going to be induced! As a new Bangor employee you are obliged to spend half a day in the main building, being told about all sorts of things. It was quite a quest to find the room this would take place in, but I got there And it got weirder from there! Bangor University is very serious about being a bilingual university, and we got a lot of the introductory talk delivered in Welsh, with headphones on, through which the simultaneous translation came through. Who would have thought! And the demographics were weird too: I was surprised to see that out of 16 introducees, 6 didn't need translation. That's quite many! And that way we had many more Welsh speakers than men. Only two of those! It seems that in April, no non-Welsh men were hired by the entire university... 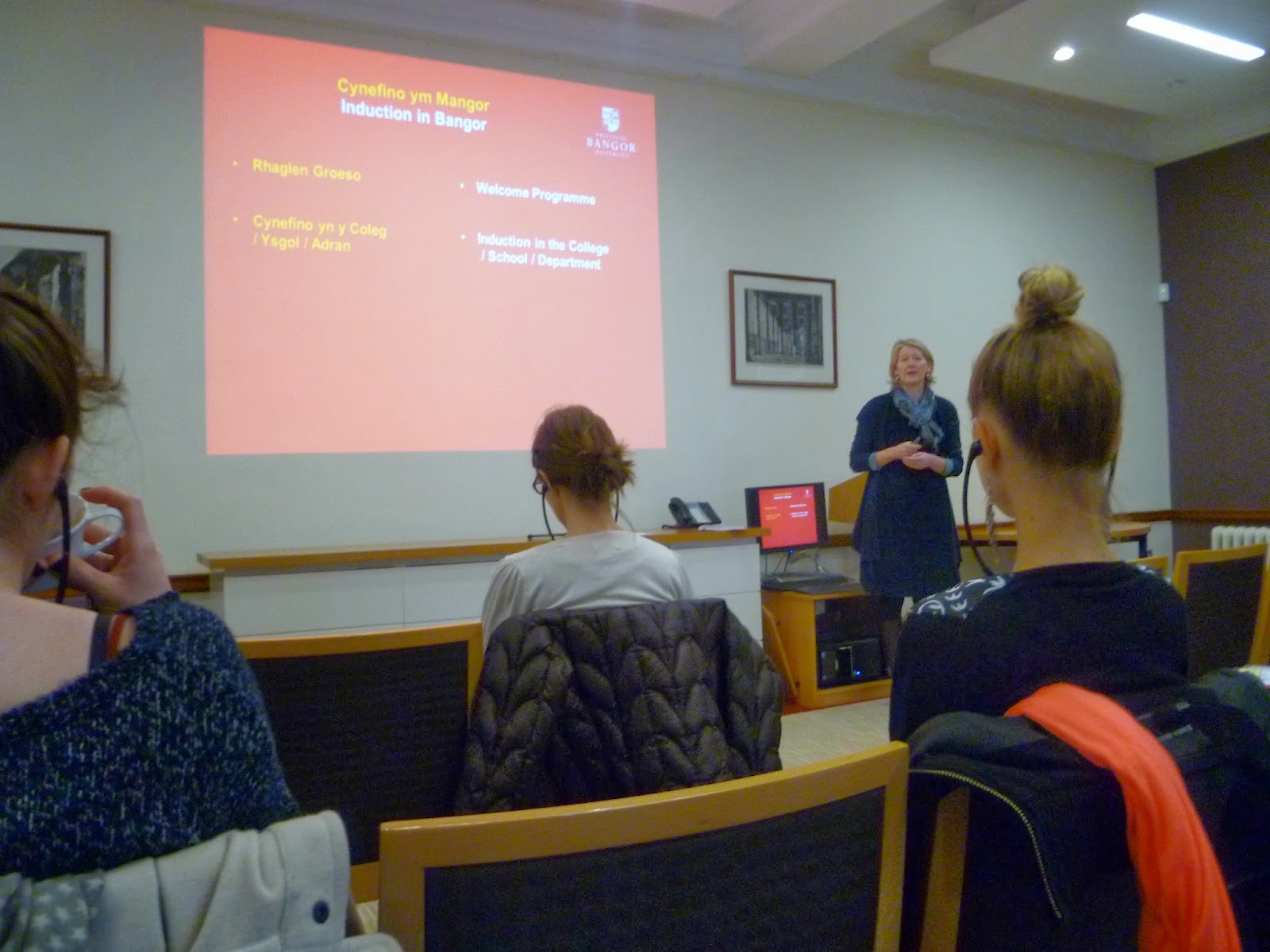 The lady doing the introduction... 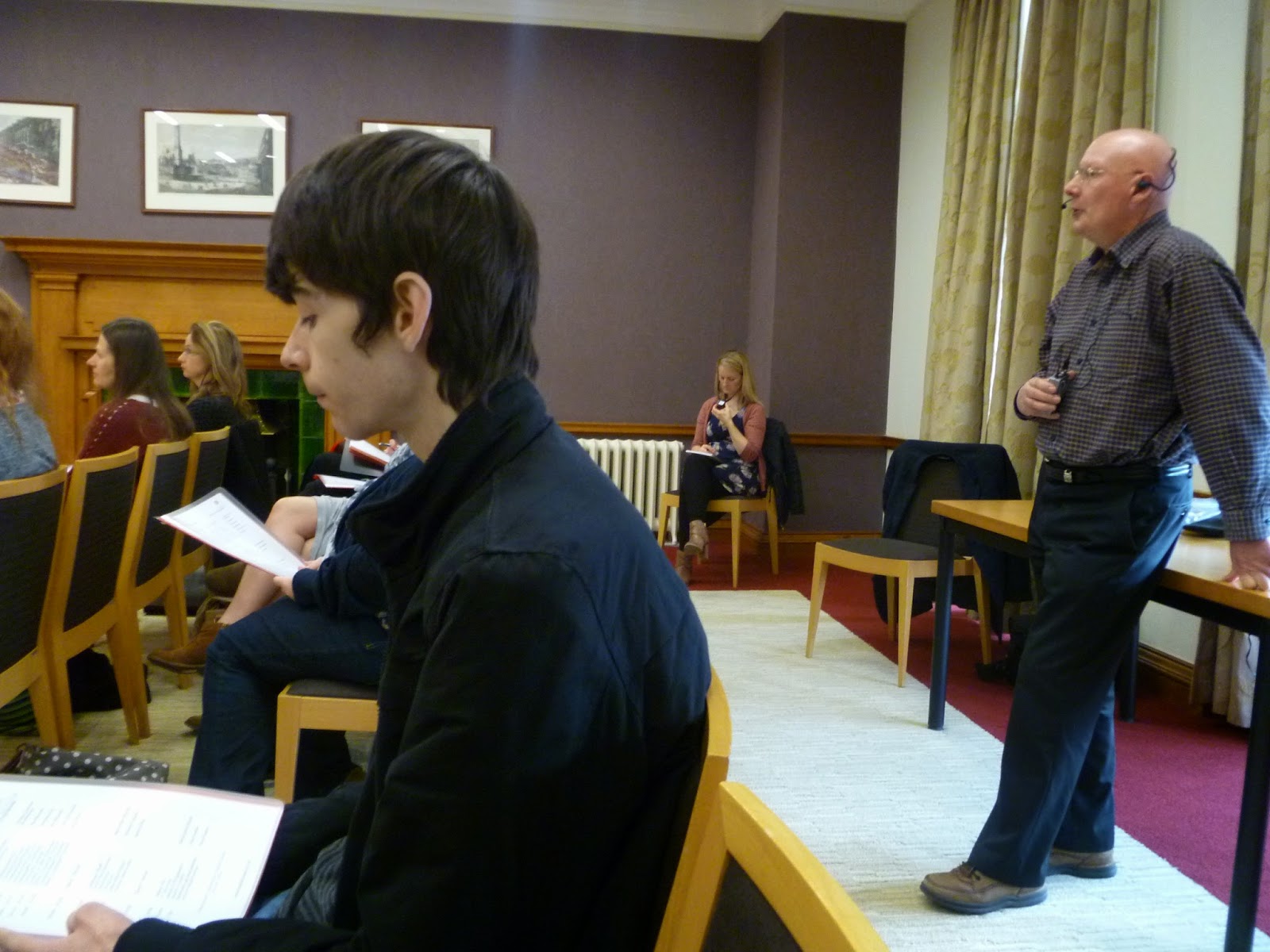 ...and the chap to whom I was actually listening!

After the induction I went to HR to have my passport and PhD diploma copied, and then to the library for a swipe card. That went all rather smooth! And by the time I was back on Anglesey in my own office, some IT chap had set up my PC. So I could start working properly! And things were not entirely sorted out yet; by now, me and Paul occupied the only network cable sockets. But we would get two more office mates... the first of which showing up the next day. But by Friday afternoon we had technicians in our office, making a start at installing two more. Before we'd know it, we'd have a fully functioning office for four! 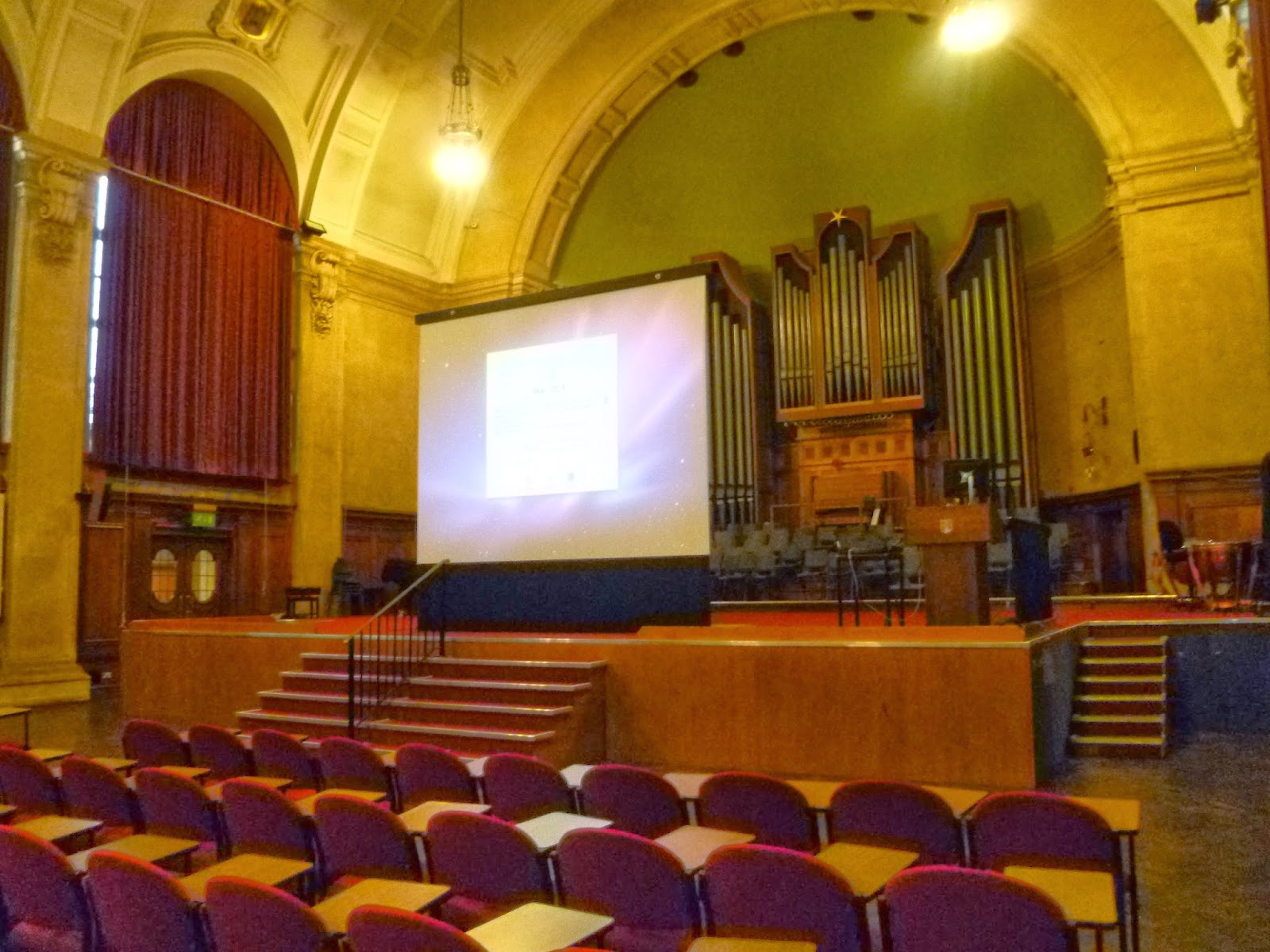 One of the lecturing theatres in the main building - they have a good taste for pomp indeed!

And the first week was still taken up for a good part by getting used to new software, filling out forms, meeting new people, informing people of my change of address, finding a GP and a dentist, sorting out issues with my old house, and doing things for my previous job, but first weeks always are a bit patchy like that. We had the first science meetings, and I look forward to the next week, which will have less transitional stuff and more solid work on BRITICE-CHRONO, the project I'm employed on!
Posted by Margot at 22:47