It is true, one tends to take electricity for granted. When I came home somewhat late one Tuesday I entered the garage to park my bike, and pushed the light switch. Nothing. Oh dear. I went into the house; the same thing. Nothing! I figured I had been cut off. The house had come with some cryptic electricity meter that allegedly required a card of sorts. The landlord and the letting agency didn't quite know how it worked either. And I had announced my tenancy to the provider, through its website, the first weekend, but I'd not heard anything. And now I was cut off. The fuses were innocent. Oh dear.

I phoned British Gas. That is not easy; you have to get through some options menu that doesn't give the option you need, and tries to redirect you to the website. Yes, a fat lot of good that website does! And after the menu you get the long queue. After a while I decided I had better first eat, and then try again. Fortunately, I cook on gas! And I have matches, which was good, as the automatic sparker didn't work without power.

After dinner I tried again. British Gas sent me to Scottish Power, which sent me back to British Gas, which sent me to the wrong number, and it was all very tiresome. Finally I got a lady on the phone. She talked sense! She immediately sent an engineer my way; it seemed that that was necessary. His ETA was 11PM. Not good for my bedtime, but hey, power comes in handy.

By 11 he was there, and he soon diagnosed that I needed a new meter. He said sometimes such things happen when a house stands empty for a while! And mine had. But in not much time he had put a shiny new specimen in position, and switched the power back on. Lovely! And he said that his report would sufficiently alert British Gas to my existence. I could now just sit, wait and enjoy electricity, and they would contact me... 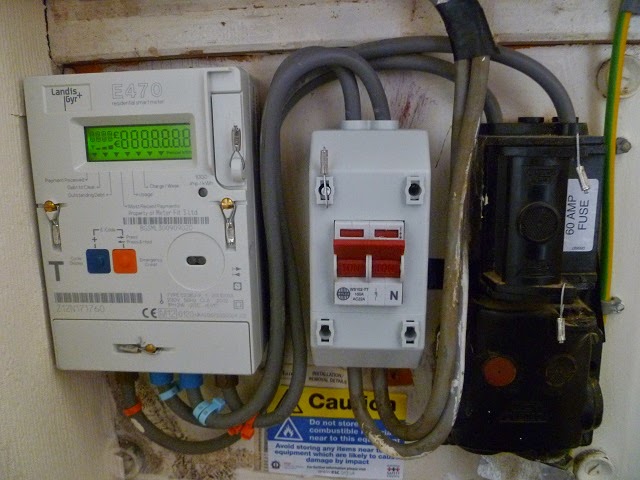 My brand new electricity meter, which still looks a bit non-set-up, and on the right a main fuse as old as the house!
Posted by Margot at 18:31