When the Marine Institute would raise a glass of mulled wine to christmas they would, of course, do that in their new building; that provided a nice opportunity to have a look inside this newest structure on campus ground. It wasn't what it should have been; the building had only been opened the month before, but already it was falling apart to such an extent that it posed a hazard for all who ventured near. The windows seemed to have been put in inside out (I didn't know window panes had an in- and outside) and the stone cladding was dropping from the walls on all sides. (For the Dutch: would it have been built by Biereco?) In order to let people safely enter the building a covered entrance path had been made. It quite took the glamour out of the entrance! It should have been the showpiece of the entire campus... 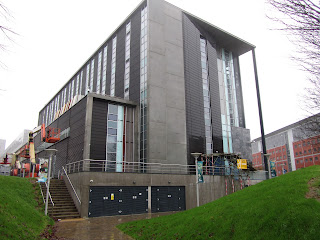 Notice the cherry-pickers and the covered back entrance 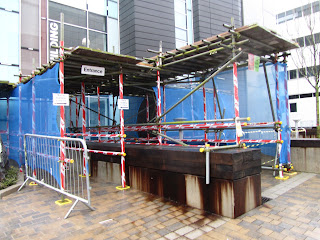 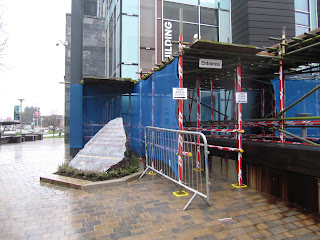 That rock put there in honour of the building and the Duke of Edinburgh looks a bit silly like this!
Posted by Margot at 08:45