The new computer and the damage done

I was looking forward to a new computer. The old one was incredibly slow! So I backed up all my data on external hard drives, and waited in anticipation. There was some automatic backing-up tool, but the ICT guy didn’t recommend it. Copying everything over takes hours, and he said it often didn’t work properly. He had already seen one guy lose seven years’ worth of data…

The day came. The computer guys had warned they would be there early. So I was too. But they didn’t show up until close to 11.

My computer was quickly removed. And not much later, the new one appeared. And a chap who did things such as connect it to the printer followed close behind. Then it was surrendered to me. Time to re-attach my tangle of peripherals.That's a lot of hassle; I reported before on the necessity of lying flat-out underneath the desk. People saw me fiddle, and came to the rescue; the guy that had connected insisted on assisting, which was very nice. At some point he decided that if the cable can't fit through one way, it may fit another, and boldly pulled out a plug. I started. It was the plug of the computer! Which was switched on! That's not a very good thing to do...

In the end everything was attached some way or other. But that didn't mean all was well now. The mouse was right-handed, which I didn’t like, and the toggle for changing the buttons around was nowhere to be found. The digital pen wasn’t recognised. Nor was my one external hard disk. Nor the next. Or the next. Or the next. Shit.

A lot of hassle later, the mouse buttons were swapped, and it had become apparent that two of my drives were recognised by the computer, but only when plugged in directly. Directly? Is that what I bought that expensive, externally powered hub for? If you have a computer without central file storage you need a heck a lot of external hard drives to not risk losing too much all the time. And these things need a solid USB port. Not a silly one on a monitor or keyboard. And now I have that hub for nothing, and not enough ports on my laptop!

And what with the other two drives? One was known to be a bit wobbly, and had been replaced. So that left the big, majestic, 1TB drive; my main centre of storage. It wasn’t recognized by the computer through the hub. It wasn’t recognized by the computer through a USB port on the laptop itself. Any of the USB ports on the laptop itself. Just then some IT guys stuck their heads around the door (again!); was all well? No!

They couldn’t get the thing to be recognised either. It didn’t work on Hugh’s computer, with Hugh’s cable, either. It just didn’t work. About 600Gb of data! On a drive only five weeks old! And gone. Shit! Luckily, I had made sure the important bits were backed up twice. So I ran to the shop, bought another drive, and quickly copied everything I now only had once onto that one. Phew.

Then I went to the support desk. And back to the shop. Nobody could help. I ordered yet another hard drive; as soon as I have it I can see if ICT can get the data off the wobbly one. It has all data from the dead drive on it minus five weeks. And when I know what I’m up to, I can decide what to do with the broken one. Most likely, I’ll send it back to the manufacturer. I might get a replacement. But rather, I’d have done without all this hassle. 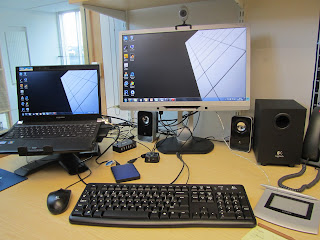 The new set-up. Notice the plethora of orphaned USB plugs...

Then I turned my attention to the hub. Trying it on another computer indicated it really didn't work anymore. Darn! The hub and the hard drive together... might that have been due to the untimely unplugging of the computer? Maybe! But that's something that's hard to prove. I don't think the university would be willing to compensate me for blown up periperals...

When there was a lull in the data hassle, I set about trying to get all the programs back I had lost. A computer only comes with office. But that went rather well! Within a day I had Acrobat, Illustrator, EndNote and PaintShop. And I had sent an email to the helpdesk, asking how I can get my microfossil analysing program (I can see why that wouldn’t be standard) back. We’ll see! But things are starting to get normal again… and when I say normal, I mean, in the end, better than it was. This computer isn’t anywhere as slow-yet-temperamental as the old one! And as soon as (or rather "if") I have retrieved all the data, and replaced hub and hard drive, be it on my own cost or courtesy of the manufacturers, I should be all set. And then I'll rock!
Posted by Margot at 23:26