The guy who came in to take my old computer away, making place for the new university laptop, was in a chatty mood. He asked me what I did. I said I did sea level research. That started him off. He asked what I thought of global warming. I said it was a big worry, but I joked it did keep me employed.

He calmly said that he believed in climate change, but not in global warming. I then asked if he believed climate was changing, but not warming, what he thought it did. Was it cooling? That question was too difficult. He instead explained that his brother, who had a degree in chemistry, thought global warming was a hoax. And he believed that. He added he had read a lot and was sure all evidence was all fabricated. So I asked him what he thought all that CO2 was doing up there. Did he believe that if he put an extra blanket on his bed, he would get warmer? That was too difficult too. He answered he had a duvet, not blankets. I patiently explained one can lay a blanket on top of a duvet. He wouldn't do that, he said; he would get uncomfortable. He didn't seem to realise the contradiction in his beliefs.

I then told him I was part of the climate science community. So I was a fraud, evidently? He said I wasn’t. But my data must have been fabricated? No, this was a free country, we were all entitled to our own beliefs. Apparently, he could think all climate scientists were frauds, and I could believe in global warming (not sure if the term “belief” is the right one here), and that was all fine. Yes, fine for him. Can you just walk into someone’s office and question that person’s integrity, and then demand that’s all taken in good humour? He later apologised profusely, but he didn’t take anything back. I think a lot of these blinkered armchair denialists don’t realise their convictions are not just something they can privately rejoice in and comfort themselves with, but that they are a downright insult to many people, some of which they might actually be confronted with. 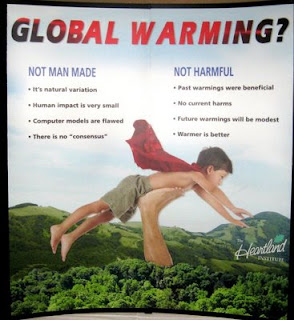 This may be what this man had been reading; material from the Heartland Institute; the wholesome body that turned to creating climate confusion after having failed to convince the world that second-hand smoking isn't harmful at all.

When I was letting of steam in Hugh's office, he helpfully pointed out that one of the advantages of a pluriform society is that people who deeply look down on each other can live peacefully together. A christian, jew or muslim, or an adherent to some other exclusive faith, might very well consider me morally despiccable, as I haven't embraced what they consider the only true faith. Yet it's better to not emphasise such things, and just do your day-to-day interactions. As long as people don't translate such religious feelings into undesirable actions it's their business. I support that idea. So why can't I happily chat away with a guy who "only" calls me a fraud? I think there are two main differences.

One thing is that if, say, a muslim baker would point out to me he thinks I'm inferior as I'm an infidel, I would indeed choose to buy my bread elsewhere. I wouldn't get violent, but why would I interact with someone who says such unpleasant things, when it's not religious discussion I want, but just some bread. And the other is: I really AM an infidel. Like it or not. But I'm not a fraud! So this man broke the code of a pluriform society in two ways: he was so impolite as to hurl his provocative opinions at me in an environment unsuited for this (do that at a discussion meeting, and not in my own office!), and he judged me on false grounds. I agree that the world isn't a better place if you fly at the throat of everybody who expresses an opinion you don't like, but on the other side, the world isn't a better place if people are never confronted with the adverse sides of their thoughts. If the situation occurs again, I'll confront the offender again...
Posted by Margot at 19:00

But he did say that he didn't consider you a fraud. At least that is what you wrote. He even apologised while he evidently still did not understand what your objection to his behaviour was. At the worst his statements show his contradictory beliefs: Either he did not consider you a member of the climate science community or he makes special exceptions to his belief that all climate science is fraudulent. In both cases I think he genuinly did not question your integrity, he just unknowingly contradicts himself and does not comprehend the difference between beliefs and scientific knowledge. Do you realise how difficult that distinction can be for someone not immersed in science for over 20 years?

He did say he didn't consider me a fraud, but he couldn't explain how that worked. I asked him if he then thought I was just a very bad scientist who created data that are wrong (as that which actually has something to do with the topic indeed supports warming, and well, apparently that can't be right) without noticing that, and without noticing it fits nicely into a global conspiracy. He then started the "belief" nonsense. And the two options you offer don't calm me down either: if he makes exceptions then he didn't mention it, and if he doesn't consider me a member of the climate science community, that's an insult in itself. He clearly wasn't the brightest, but I don't accept that as an excuse...