The quest for heat

The Brits are infamous for their pumbing. The area I live in is infamous within Britain. Would my house be state-of-the art regarding technology, safety and efficiency? Of course not. Am I a complete sissy? I certainly hope not. Do I want heating in winter anyway? Yes, that I do. What does that mean? A struggle.

My house came with a somewhat old-looking boiler. It had its quirks. It generally managed to produce hot water for the kitchen tap, but I couldn't take heating for granted. That would be a bit on-and-off. But when this autumn this turned into off and off and off I phoned the letting agency. Which sent a maintanence man. he reported back:

"There are issues with the boiler.
Was left in a dangerous condition as 240V electrical connection were left exposed. Have tape them up but the missing components should be ordered.
I would recommend boiler replacement due to age and condition. Age 20+years." 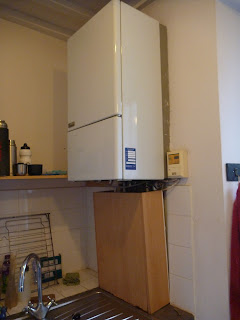 So I figured it was time to retire that thing. To my surprise, a few phone calls later I was told the landlord was acquiring quotes for a new specimen. Yay! Something happens! So on a Monday morning, when I left the house, I bumped into two young men carrying tools. My saviours!

When I came home that evening I hoped to find a working boiler and working heating. No; the installation of the boiler wasn't finished. They would come back the next day. 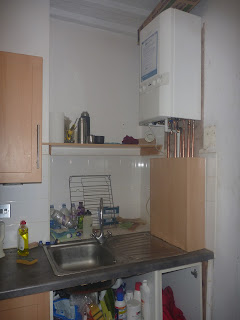 The almost installed new boiler! They seem to think I'm a giant; in order to properly see the dispay I have to climb on top of the kitchen work surface..

When I came home that evening I hoped to find a working boiler and working heating. No; the boiler looked all fine, and was producing nice warm water, but even though all the radiators were at rather high settings, all of them were cold like the grave. Still no luck! So I phoned the guy who promised to have a look in the afternoon. Would next time be better?


And it was! The next time I came home to a warm house. I had to turn the heating down a lot; the repairman had really cranked it up. But now it evidently worked! I'm reaady for the winter! And I might even escape the temptation to take that for granted...