I can’t remember when I started to walk on orthopaedic soles. Somewhere in my time as a student. I graduated in 2001; it must be over 10 years.

I do remember the time when I didn’t realise it wasn’t normal to get pain in your feet; I vaguely remember a visit to a museum as a primary school child. We were shown around, standing still at many works of art. I was in agony. I wanted to sit down on the floor, but I didn’t dare. I was surprised the other children didn’t show their pain. How was I to know they didn’t have any? I also remember many hikes I did as a girl scout. I think I knew by then pain shouldn’t be part of that. I was in agony quite often, but I didn’t want to give up. I was playing the “tough girl” card at the time.

I also remember the time when I was trying to have the cause of the pain in my feet addressed. I went from physician to physician; I was medicated, electrocuted, injected, and operated on. Nothing helped. So then we turned to fighting symptoms, in the form of orthopaedic soles. It limits your choice in footwear, but at least it keeps you walking. I’m still not very good at loitering and hanging around, but as long as I walk at a reasonable pace or more, I tend to be fine.

I stuck to my mother’s orthopaedic shoemaker, as she had good experiences with it. (I’m not the only one in the family with foot issues!). But after all these years, when I visited my sister, I decided to look elsewhere. She has insoles too (surprise!); though our feet are rather similar, her soles were profoundly different. Mine are chunky things that make me wear shoes of up to three sizes too big. I just can’t fit both the sole, and my foot, in anything smaller! But my sister’s were a fraction of the thickness. And still did the job. I wanted that! It’s not good to wear the wrong size shoes all the time. And it is annoying to be so limited. Many shoes just won’t be combined with such a massive insole. 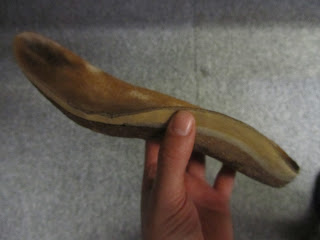 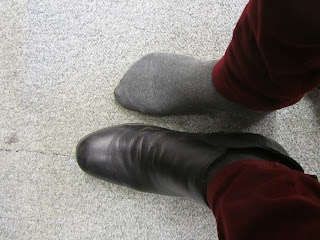 When I had seen what is possible, I decided to have a look if I could find a local specialist who could do something similar. A small google job later I had found a chap some ten minutes up the road. An appointment was soon made.

I told the guy I was looking for thinner soles. He looked at me, and wondered if I actually needed soles. He looked at my feet, twisted them, prodded them, asked me about them, made me stand, walk and run. He turned out to be very opinionated, and quite opposed to general practice in what he called “Europe”. He said there it’s the shoemakers making the soles, while in the UK it’s the podiatricians. Such as him! But he decided insoles were something that would help me, after all.

I think the guy knows what he’s talking about. He took a cast of my feet, and we have an appointment coming Monday; then the new soles should be done. I’m eager to see what he’ll have done! If he has made soles that are as good as my old ones, but thinner, that would be very good news for me. And good news for the local shoe shops, as I now only have shoes that either fit the old soles (size ~EU39/UK6) or no insoles at all (my heels and running shoes, size ~EU37/UK4). I am thinking of wearing the old shoes out. The podiatrician doesn’t recommend it; he said I should swap to the new insoles, and thus new shoes, in a matter of weeks. But it’s not him who’ll have to do the shoe shopping!

I’ll report back next week… this might be quite a big change for me!

Oh! I'm trying them out as I type! I'll report soon!