Religion and science. Both address the big questions of life. And they do that from two mutually exclusive viewpoints. At least, that’s what most people agree on. But not all.

Many years ago I saw a book for sale: The psychology of religious knowing. It didn’t look peer-reviewed, but it evidently was meant as a serious scientific book. I was fascinated! Religious knowing? I was not sure if the authors had been studying people that claim to have religious knowledge, or that they claimed to have that knowledge themselves, and studied it. In the first case it may have been interesting science. A lot happens in the name of science, and it is very relevant to have psychological insight in those who act thus. And you may never find out if those who claim to read God’s mind really believe themselves that they do, or that they enjoy using religion as a justification to serve their own goals, but that is just one of these complicating factors of social science. (It would not surprise me that if you toss someone’s head in a CAT-scanner you may be able to see the difference through observing which part of the brain fires when, but I have problems imagining the big players in world religion volunteering to undergo such an experiment...) Social science is not, and never will be, natural science, but that does not mean it is not valuable, and social scientists have, as far as I know, come up with an impressive array of tricks to deal with that complication. 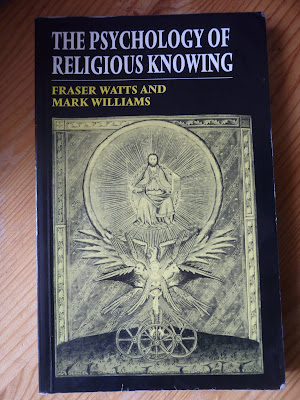 In the second case I was curious to see how they would try to somehow blend religion and science (ne’er the twain should meet!) to some homogeneous mixture. And when I was at home with my tonsillitis I finally got down to reading it, and finding out. It turned out to be the second option.
The two authors evidently claimed religious knowledge in both themselves and their study objects. And I always find such things a bit dodgy; if you’re religious you believe in a higher power. And who are you to claim you understand that power? Christians have the Bible, for instance, but isn’t it major hybris to claim to know how that book should be interpreted? And if you decide to follow that line of thought the only thing left of religion is a general striving to live life in a “good” way, but you need not be religious to do that.
Evidently, the authors do NOT follow that line of thought. So what do they see as religious knowing? They had interesting analogues for it. One of them was the “tip of the tongue” effect; if you can almost remember something, a name for example, and suddenly it comes to you, you knów it’s the right answer. It feels different from al l the almost-right names swirling around in your head before you grasp the right one. And they say religious knowledge feels like that. A bit dodgy, though; I imagine the “tip of the tongue” effect to be a sort of pattern matching. You have the name you look for somewhere in your system, and you can compare everything you can come up with with that name, and when you have a fit you know you got it. But with a lack of previous factual information in your brain, the analogy with religious knowledge goes wrong, unless you assume there is some mystical information present that you do the pattern matching with. But that’s not science.
The better analogy they had was personal insight gained, for example, in psychotherapy. During such sessions (or just on the phone with your sister, just to name a random example) you can reach a sort of aha-Erlebnis. Suddenly it dawns on you, for instance, that that nasty person treating you so badly actually is you allowing that person to do that, just to name a bit of a cliché. And they say that such eye-openers also occur religiously. Suddenly one may understand something about God. And they continue with observing that such events often happen in times of stress, and that they are followed by a change in attitude and/or behaviour. If they aren’t the person claiming the insight is a charlatan (their words!).
The fact that they claim that this knowledge is an aspect of some religious truth, and not a special type of personal insight, makes me discard this as non-science. If only because different people can come to mutually exclusive insights that still would qualify as “knowledge” in this definition. And religion is faith and cannot, by definition, be proven, and I think everyone who tries anyway gets something wrong somewhere. And may well in the process damage the name their religion has. Not by any means seriously; leave that to those murdering and oppressing in the name of some god, but damage nonetheless. Yet reading this book I got sympathy for their efforts anyway. I discard the notion of religious knowledge, but if you agree to disagree and read what else they have to say, it’s interesting anyway. What is interesting about it?
Some things were just funny trivia, such as results on how neuroticism relates with church attendance and racial prejudice. It seems that those who occasionally go to church are significantly more neurotic and racist than those who either go very often, or never at all...
Another thing I liked was their discussion of prayer. They describe a simplified evolution in how one prays through life. It starts with children, hardly grasping the concept of god their parents have been trying to impose on them, praying for material goods and personal gain. God as Santa, and if you don’t get what you want, you must have been naughty. Later the kid might conclude from an unanswered prayer that it wished for the wrong thing. In adolescence, a stronger aspect of confession seems to come in; not surprising if you see what mess adolescents can manoeuvre themselves into sometimes. And then the final stage: adult prayer, where praying serves more as a means of making sense of the world, reflecting on the self, and such things. If I may rephrase it; no more God as a mail-order service, or an older sibling that can put things right, but God as an excuse to take some time to reflect on right and wrong, purpose, life’s difficulties, and whatnot.
Some time used one proper reflection is one of these things the western world seems to really need more of. Indications of people living shallow, consumptive lives are ubiquitous, and if more people would reach the stage of this adult prayer, or, to take it out of its religious context, thorough reflection, this would truly be a better place. At least, that’s what I genuinely believe (!).
So what can I conclude from this book? It was an interesting excursion into the religious mind. And now I have seen how those with the best chances of getting away with it, try to somehow hammer square science into the round religious hole (or vice versa). I am not at all convinced! At all. Nevertheless, I still think they have valuable things to say. So I expected to decide to throw away this book after having read it, but all in all it is actually something I could recommend!
Posted by Margot at 15:26

I am impressed by your psychological insight!

Maybe you had a hand in it!

So maybe I am impressed by my psychological insight?