I'm weeks late with blogging about this! But better late then never.
On Monday the 26th of April I was walking over the campus when Isuddenly felt my head clog up with slime and my tonsils swelling to uncomfortable dimensions. I figured it would be best to go home, so I went to my office, left a message on internet regarding my state, checked my mail, and left. One mail puzzled me a bit: it concerned "boobquake", whatever that may be. It sounded dodgy, but the sender was trustworthy, so I checked it out. And this is what I found. 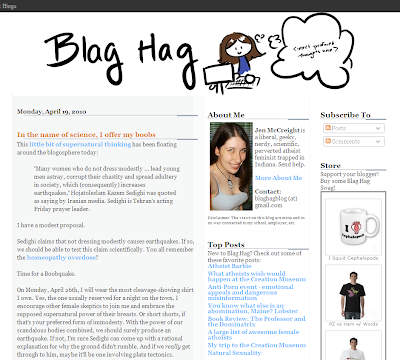 This page can be found here
A girl indignant about Irani religious fanaticism, who had the idea to tackle this with a sense of humour. For those too impatient to read the above screenshot: she figured that if the hypothesis is stated that immodestly dressed women do create earthquakes,we should test that hypothsis, and en masse wear smething very revealing. That should lead to a serious quake. Or falsify the hypothesis. Great idea!
Unfortunately, the great dress-down was that very day, and I was falling ill, so I was more inclined to cover up. Even if I would have shamelessly flaunted any feminine asset I could find, there would have been nobody to see it as I was straight off to bed. Missed chance!
With or without me, this thing had gained momentum, and caught international attention. Those who have checked out the blog of the inciter will have seen she did not expect anything big to happen, but before she knew it she had to defend herself against enthusiasts clogging her mailbox, small-breasted women complaining they felt left out, feminists claiming she was being immoral and/or offensive and whatnot. The power of a blog! I can only watch in awe.
And then even the Iranians caught up. She made it to the national news! An honour. But I must admit that when I saw that it scared me too. Religious fanatics tend to have their own ideas of what to do with provocatively dressed women. And the world is as big as the screen of your TV and computer! I really disliked myself for being scared. If we all are scared nobody will stand up against dangerous nutters! I do hope that if I ever find myself in the situation in which I can blog for a good cause, and it takes off, I will stand like Blag Hag does, whether shitting my pants or not...
Posted by Margot at 17:21