Some caving trips are a bit more elaborate than others, and are better not done on an evening in the middle of a working week. So this Saturday I was ready with all my kit at 8 in the morning, waiting for Dave to pick me up. That was a pleasant activity, as the weather was beautiful, and I even enjoyed the attention of the neighbourhood cat; all the better as Dave had been called to work and was a little late. But somewhat later we arrived at the designated location, and could gear up. I happily covered myself in shiny, clean, brand new caving gadgets (välineurheilu!), which would not stay shiny for very long. Soon afterwards we were lowering ourselves into a bottomless hole.

I was the second to come down, and when I arrived I was greeted by an unusual sight. Lionel had inflated some cheap-ass children’s rubber boat! He knew the tunnel would be flooded, and thought it would be a nice change to negotiate it with such equipment. His cunning plan involved using the spare rope to pull the modest dinghy back, so we could all use it one by one. Weight permitting, that is; the nutshell came with a weight restriction of 55 kg. Yeah right... The rope, however, was too short, so Lionel himself managed to get to the other side with only minor damage to his dryness (try to get into such a thing as an adult without taking in water) but we had to follow on foot. On the other side we did our usual exploration and photography thing, but only for a short while as it was a dead end. 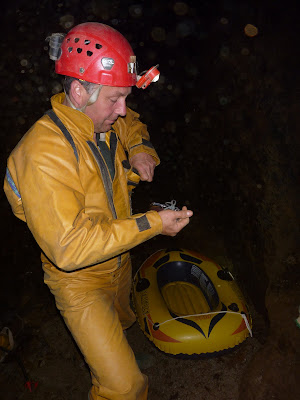 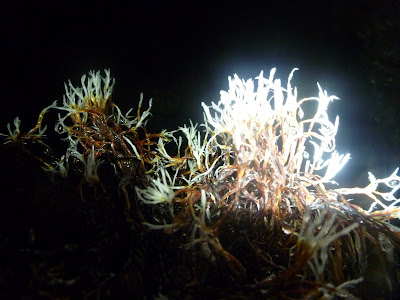 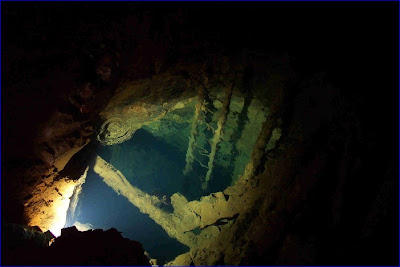 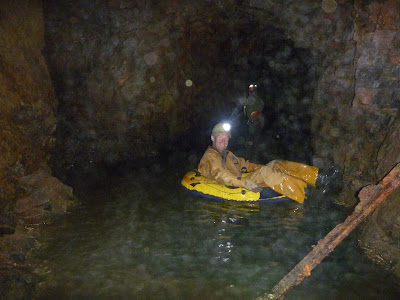 Rupert's turn to have fun


We decided to go back to where we started (this time Rupert enjoying the Titanic), and then further in the other direction. More flooded tunnels! And at some point I even ventured into one with Dave that he had never been in before. These must be rare. But it seemed that we had found this mine in an unusually dry condition, and that this specific tunnel normally wouldn’t be accessible. And indeed, when wading through deeper and deeper water I could behind me hear the obligatory moans and remarks pertaining to the loss of aridity and temperature of his sensitive body parts that comes with male cavers. And that was only the beginning! By the time the water came to my collarbone I suddenly saw daylight. A rare sight! And a possible exit at that level would spare us the faffing with the SRT kit, so I went to have a look. With the water coming to my lips and the ceiling being immediately above my head I concluded that it probably was technically possible to get out there, but that only after some additional digging from the outside this would be a more comfortable exit than hauling yourself up on a rope. So we went back. 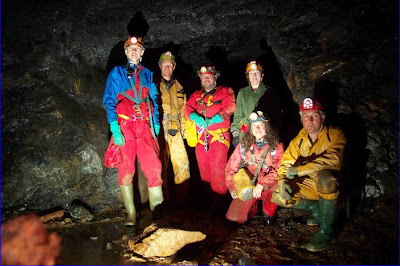 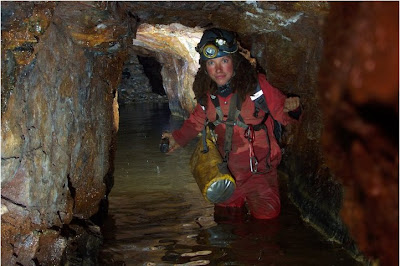 Me in the until then unexplored bit; so far in relatively shallow water (pic by Dave)
Hauling myself up on the rope turned out to be a bit of a cumbersome thing as well, as I had not tightened my harness enough; something that greatly reduces the efficiency of movement. A learning experience. I hope to get some more practice soon! But I did make it up, and out, and there even found two gentlemen helping me out of all the crolls and clasps and karabiners. And while they kept an eye on the next ascender I went for a walk, trying in vain to locate the newfound exit from the outside. 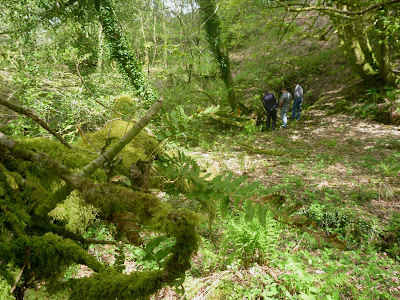 The men looking for the adit 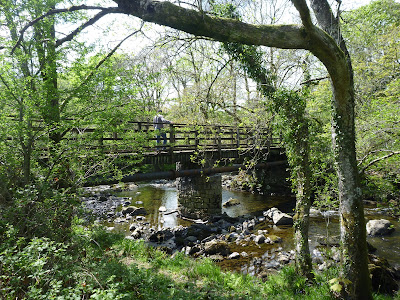 Nice day for a stroll!
On the way back, the others did find the exit, so we all changed into something dry and went back for another look. Lots of pretty mining ruins! And indeed, the dodgy-looking adit. Maybe we’ll come back there, and dig it out to such an extent it is within comfort limits of the average caver to move through... 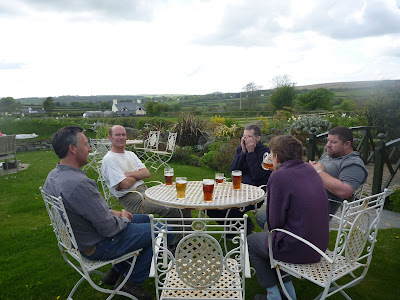 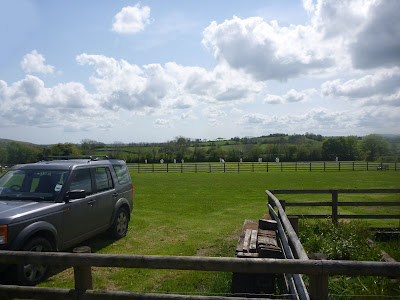 Cricket in the distance!
It was still early, so there was time for a pint. We found a country pub with a pretty beer garden and a view on a field where cricket was played, so we had a lovely, sunny, profoundly British liquid lunch. And then back home for an equally enjoyed shower! A good day.
Posted by Margot at 16:57