Two years in Norway makes you a veritable sports addict. And after only a few days of being back from Iceland, and not moving much (except for the lifting of a glass of beer to the mouth) I got restless. I decided to go for a bikeride, and spoke of that intention at the barbecue at Veit's place, or rather at his supervisor's place. It seems to be normal here to move in with your boss*. Veit did such awaiting his repatriation.

Anyway, my announcement caught he attention of another griller, Big John; an epithet meant as an aid to to distinguish him from the aforementioned host: Little Jon. In spite of the somewhat incongruent-looking combination of my warning that I was mainly interested in getting my muscles moving, his 20 years seniority, and his deserved nom de plume, he wanted to join.

So sunday morning we took off! John does not lead a miss Marple lifestyle, so the whole expedition got somewhat delayed, but within limits. We decided to bike where once the Great Western Railway had run. It turned out to be a beautiful path, ending near a village called Clearbrook. A good turning point. And an opportunity for a profoundly British couple of pints of cider before we accepted the road back. It was a good ride!

And I did not get half the exercise I had initially planned, while John got much more than bargained for, but in this way it was a nice combination of movement and a social gathering. And the map showed that if we would not have biked straight north, as we did, but northeast, we would have ended up on the Moors. If I go alone I can bike there in a whiffy and then explore Dartmoor! It's even closer than I thought. I see possibilities! 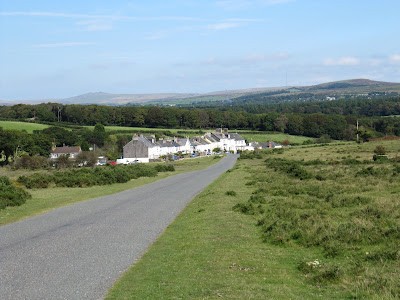 The approach of Clearbrook
ps Jon is not Veit's supervisor! I just erroneously thought that. All these human geographers seem the same...
Posted by Margot at 16:16