Fiction read, and not in Welsh

I like reading, but I don't do it an awful lot. I suppose it might have something to do with Calvinist work ethic; reading feels like just leisure, unless, of course, it is for work or for potential future work or for learning a language. So when I am normally working I only stop working fairly late, which doesn't leave much time for reading a novel. And when I was off sick I was very aware of my uncertain future, and spent a lot of time preparing for it. So I read more than I did before, but still not that much really. I had read the diaries of Roald Amundsen. And the last two fiction books I read were in Welsh: a Kate Roberts, and a Manon Steffan Ros. The last fiction I read in non-Welsh were almost year ago! One I had borrowed from my mother, and one of which I just really liked the reviews in the newspaper.

Then I had my birthday. My sister sent me a book in Dutch! It was a collection of short stories. I tend not to gravitate towards short stories, as my attention span is too long, but now I gave it a go anyway of course. I hadn't heard of the bloke, but then again, I am a bit out of it. If writers don't get the attention of the British press (like Marieke Lucas Rijneveld) I don't know about them.

So what did I think? Unsurprisingly, there was a bit of a positive correlation between how long the stories were and how much I liked them. I like being drawn in! And the writer reminded me a bit of Kazuo Ishiguro; all stories are set in the world that you clearly recognise as the Netherlands not to long ago, but many have some strange dreamlike quality to them. Strange inexplicable things just happen, and are barely questioned, like in dreams. I like this straying just a little bit into the absurd. And some stories don't even need that; some are just completely plausible. And there is a bit of theme going through, with morality and communication. It is not unusual for characters in the stories to be somehow imprisoned in a situation of sorts, and not being able to avoid facing their choices.

I think my favourites of the stories involved a time-travelling young man who goes to visit his parents before they have become parents. And yes of course, time travel always has problems with logic, but I thought it was done so well this wasn't distracting, and you ended up thinking about the implications. Another one was quite short, but I liked it anyway; about a group of schoolkids who find some mysterious tunnel that leads to their school, and which cuts their cycling time to an utter minimum. But of course, as in the fairytales, this only seems to be a good thing. And then there is one about a man who has been seriously hurt in a traffic accident, and comes across the woman who caused it.

So now this book is finished, what is next? I will lend it to my Dutch friends, and myself continue with my book about Welsh slate, which is taking me forever. But I am making good progress! The end is in sight. And I have made notes on my phone about books that either have been recommended to me, or of which I liked the reviews in the newspaper. And I still have several books lying around I would like to get to at some point… 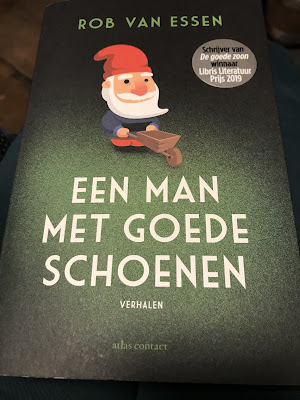