When I was on Facebook to gossip about goats (as you do) I saw that my old mates from the York Caving Club were doing a live-streamed event later that weekend about caving in the North York Moors. That sounded cool! I registered. And on Sunday evening I was ready.

It was good to see the chairman Matt, who is a really nice chap, and who was doing the talking. He gave a lovely introduction, covering geology and the history of the involvement of this club in the underground venues in this area. And then he explained what they had been up to in the past, say, 10 years. Including 2020!

I had been involved for only a year, and I had been helping out digging a cave called Jenga Pot. They had already dug out a lot when I appeared, and they dug out a lot more since I left, that it was really nice to see the overview. And they had managed to dig out a big exciting passage in between lockdowns! It had been called Pandemic Passage, of course.

I was quite impressed; their exploits had involved lugging in three pumps to pump out three different sumps in succession, and they had just done that. Nothing stops them! Except the pandemic. Nothing is happening now. But I'm sure they will be back soon as it is safe again! And then they will undoubtedly be discovering kilometres more of underground passages in the unfashionable Jurassic limestones of the North York Moors.

A live-streamed event is not the same as actually seeing them, but these are not the times to do that, and this was a perfect lockdown Sunday evening outing! 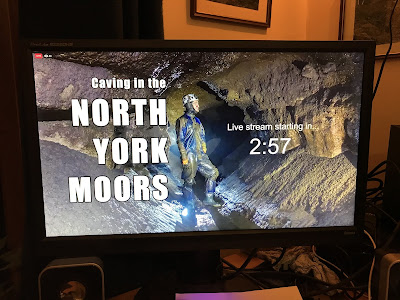