I had intended to do a combined bike-and-walk session to see if my arms would cope a bit better with riding a bike by now. I hadn't ridden a bike for weeks! But it was really cold and windy and I didn't like the thought of it. First of all; when it's really gusty, riding a bike is not pleasant, and second; walking is not as pleasant either, and I wanted to save a walk after first having to bike for a bit to a day on which that would actually be enjoyable. So I binned the plan, and went a lot less ambitious. There was one corner of Mynydd Llandegai I still hadn't explored! And it was a very swampy corner. And swampy areas are actually quite good to explore when it is cold, as they freeze over, and you're not sloshing through the schlorp up to your ankles.

This corner I was exploring is basically skirting along the back of the spoil heaps of the quarry. I chose to go the beautiful way; over a path that is not on the map to St Anns Bethesda, and then through the fields over the river Caledffrwd to where I intended to be. And there is not much there! Just swamp and spoil heaps and some ruined buildings. But I loved it! And it was partially frozen; there were places where I was trundling through the waterlogged fields, but in places I the just skipped over the top. It was pretty cold! I was glad I was not on my bike. The wind was relentless. And from a distance, the mountains looked inhospitable and Arctic.

When I was standing in the middle of a swamp my sister phoned. That was nice! But I suggested we postpone the call until I got home. It would be nice to be able to sit down. And I didn't think the signal would be particularly good in this arbitrary swamp. I also thought that in these temperatures, my phone battery wouldn't really last. So I headed home! I'm sure I'll be back here. But I think I should either be resigned to large amounts of mud, or wait until a dry spell. These don't happen very often, but they even occur in North Wales! I'm glad I've now been here. Even more of the environment explored! And this was beautiful… 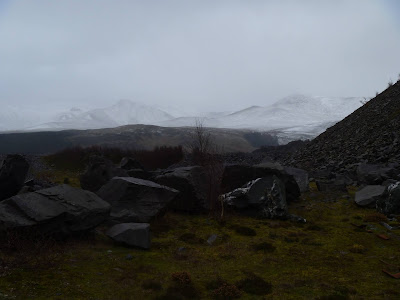 This actually happened before the live streaming event; apologies for the lack of chronology!