Starting to tackle the upstairs garden

I had spent some time taming a corner of the downstairs garden. (It sounds weird, this upstairs/downstairs phrasing applied to a garden, but that's how it is. For those that haven't been here: the 'upstairs' garden is what originally was the garden; the 'downstairs' garden is half a former slate yard that was added to the house, and connected to the original garden by stairs, in the eighties. The other half is the neighbour's.) But when you start you see opportunities elsewhere. So I also looked at the upstairs garden. I faithfully cut the grass, but otherwise I don't do much there! Hence it being a bit of a jungle. But when I started pruning a rose bush in order to make it block the stairs less I got carried away. I also wanted to get rid of some flowers I think may be Crocosmia: they basically covered the path entirely. As pretty as their orange flowers are, they shouldn't do that so they had to go. And I removed them on one side of the path! I forgot to take a 'before' picture, unfortunately...

I then pretty much cleared the ground there all the way to some old slate boundary. And the next time I was in Bangor I bought some plants for it! And I took down the clothes line on one side. That makes things look better. I need to come up with a tidier was then just rolling it up and laying in on an old quarry tile, but there is no hurry.

Altogether I want to pretty much clear out everything except the rosebush and a rosemary bush (I still think this theme has something to do with the previous owner being called Rosemary (Rose for short)). And then use most of that space for edible plants. I have some mint and sage waiting! And I have peas all over the place. And I can try lots more next year. My cabbages are still going strong! Still not making enough cabbage for a meal, but hey, I have time. But I digress. My upstairs garden is a lot of work and it progresses slowly! Next thing is: the rest of the Crocosmia. Then at least the path will be, and probably stay, clear! 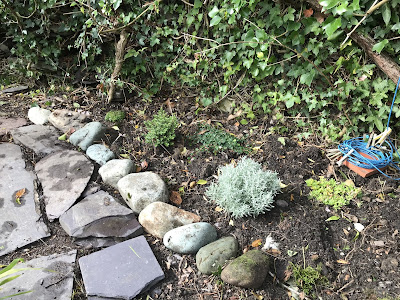 One corner almost tidy now!
Posted by Margot at 07:55