My apple tree had been standing in a corner of the garden among lots of weeds and wild growth. When I had initially started removing all this wilderness, I had revealed it was actually in a raised bed. I had sowed grass in the space between the raised beds, and everything had become a lot more tidy. I didn't initially find the time to empty out the apple tree bed, but it's been weeks, and now I have! There's nothing in it now except for the apple tree itself. That's quite sparse. But that's okay.

I intend to have some low vegetation around the tree. It might have to wait a while though. What I have done for now is just put down slate directly underneath the tree, because I don't want to have to go weeding underneath it, given that the tree is only inches from the ground. Around the tree I do want to have plants, but I also put some big slate slabs down, so I will have a bit of a path on which I can walk around the tree.

The whole corner of the garden is very civilised now. The grass is already coming up. I'm sure that next summer it will all look great! I don't think next year will be a good apple year but so be it. I can't have it all. 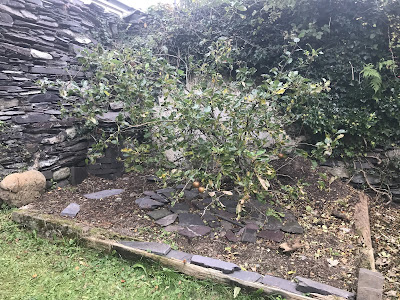