More tidying up of upstairs garden

I had started tidying the unruly jungle next to my conservatory. And it was time to continue! I wanted to get rid of all the assumed Crocosmias that were obscuring the path. And I figured I may as well get rid of the raspberries as they didn't spark much joy. So on a Sunday with OK weather I took my spade and set to work. And got rid of the lot! And I found hidden slabs of slate.

When all was ripped out I went down to the riverbank for more rocks to demarcate the plant bed from the lawn. The river was low enough for that! Not to be taken for granted in October. And then I planted several plants there that had so far been living indoors. The aubergines moved out, and an apple mint, and two small plants from the Friday market, and some peas that had so far lived in a pot. I might now take the pot indoors to see if I can grow something in it over the winter. It would need to be something that doesn't need much light! The conservatory gets too cold, but not much else gets a lot of light in the house.

This is only the side of the garden next to the drop to the rest of the garden. There is a lot more chaos to fight on the other side! But one thing at the time... 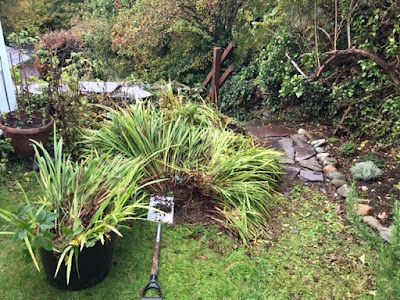 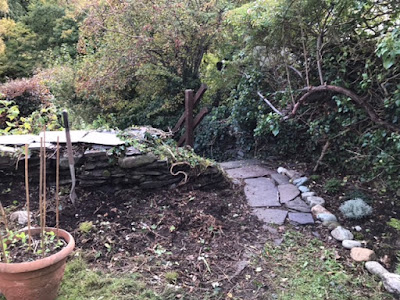 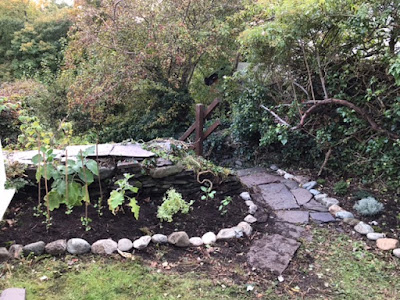 And remodelled!
Posted by Margot at 08:18