One wall painted; my job done

After coming back from the Netherlands I set to work on my spare room. It was a building site! And the paint wasn't collaborating. But if you have a big job on you just keep going and then the problem solves itself. But then I had a cup of coffee with Phil. He asked me why I even did it myself. I had figured it's more faff to find a painter for a small job like that than it is to do it myself. Otherwise I'm all up for paying other people to do that sort of stuff. I like being able to use money to buy myself time! As I am doing with cleaning. But Phil had just had some of his house done by a painter he recommended, and he figured he wouldn't mind a small job. And he gave me the chap's number. And I contacted him. And he was up for it! According to Phil, he was also into wallpapering, so he could also do the experiment with thermal insulation. We will see how it goes! 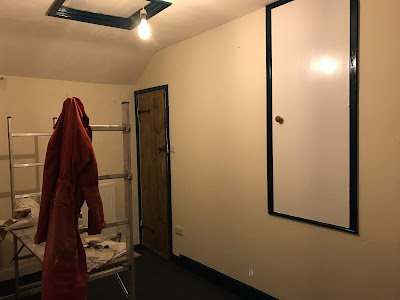 All the woodwork on the wall (almost) done! I added one coat on the skirting snd the doorframe after taking this picture.