This year my birthday would fall on a Saturday! And I don't care an awful lot about birthdays but I figured this would be a good year to make a bit of an effort. Last year I didn't do anything and the year before my birthday had been on a Thursday, so that was fully booked anyway. But this year I thought maybe I could convince my new walking mate Kate to go for a walk! Whatever the weather. And she was up for it! Great!

When the weather forecast was clear I came up with a plan. I had seen an incline in Drws y Coed many times, but never walked it. It goes to the ridge of Mynydd Mawr and from there you can go to the top, and then either back down the ridge, or down on the other side and then back to Rhyd Ddu through some woodland. We'd see what would tickle our fancy!

We met up just outside Rhyd Ddu. From there we dropped one car in Drws y Coed. And we walked up! It was pretty and civilised. The terrain that is; the wind was strong. And we walked to the ridge. There we saw not only the path going further up that we had seen on the map, but also one going down on the other side, and one following the contours on the Drws y Coed side. That looked interesting! We decided to have a look. 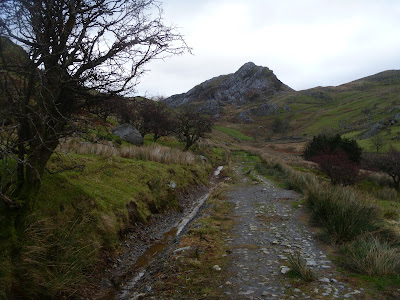 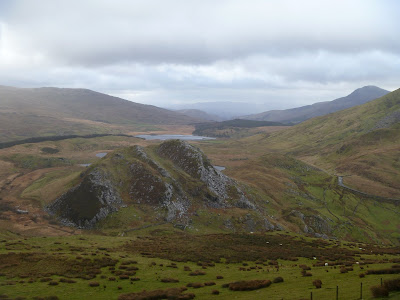 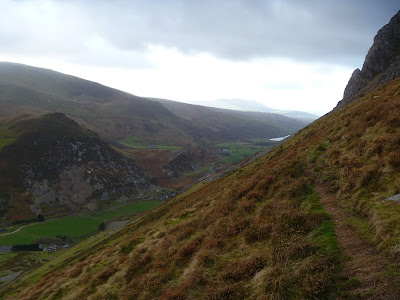 
The path went straight over the scree slope! That was cool. And then it seemed to bend right, straight up the hill. And it didn't seem to go straight on. We gave it a go! And the vertical bit went fine. But we were scared of what we would find at the edge. We could hear the wind howling like nothing on earth! But well, one way to find out how bad it was. But not yet. We first had a drink and Welsh cakes. We had both brought them to celebrate my birthday! A funny coincidence.

After the Welsh cakes we went up. And when we hit a ridge (not even the final one!) we could not stand up. The wind was so strong! We knew we had to abandon this attempt. But come back some other day with less wind! So we scrambled back down and went back to the ridge. 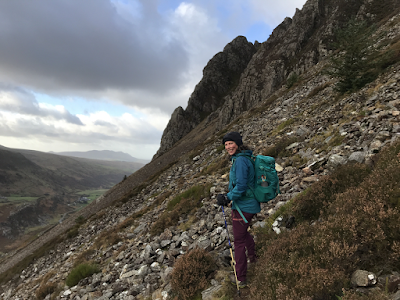 Onto the scree! Pic by Kate 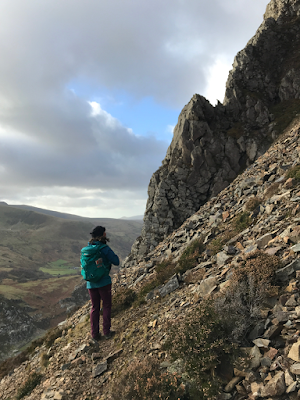 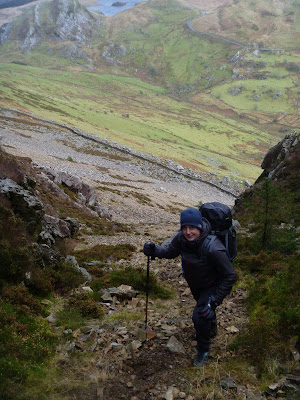 Kate on the slope 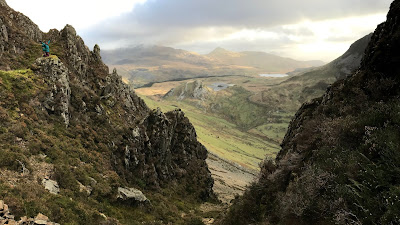 Me on a pointy rock. Pic by Kate

Once on the ridge we went up. I expected to be blown off my feet any moment but it didn't happen. We calmly strolled up! All the way to the top! And there we sat in the wind shelter and had lunch. And we decided to go back the way we came. It was after 2PM and the sun would set at 4! No use to stagger through woodlands in the dark.

We strolled back down. Lower on the hill the path vanished a bit but that was OK. We got to the road and decided to go to the pub for a hot chocolate! That was nice. And then we went back to Kate's car. I think this was my best birthday in many years! Hurray! And now it was time to go home, buy some food, and then cook dinner. And then light a fire! All good! 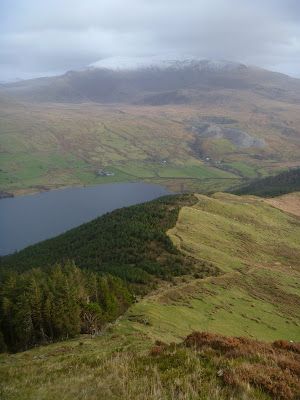 The path (or absence thereof) along the treeline on the ridge. And a snowy Snowdon in the background. 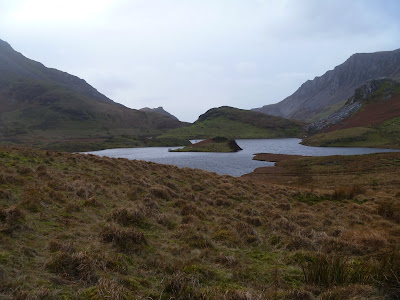