There was a rescue training coming up. I wasn't looking forward to it, to be honest! It had been e tiring week at work, and having to scoot around underground all day on Saturday then isn't a very attractive proposition. But it has to be done! I got ready in the morning and drove to Capel Curig to meet Edwyn. We'd drive up together. And it was such beautiful weather! We were both a bit sad we would not be in the mountains on a day like this.

We got to the meeting point and only saw very few cars. But one quickly yielded a team member. And then another one did too! We were clearly in the right place. And a cold place it was! Everyone kept on popping into the boots of their cars to retrieve more hats and jackets and whatnots. And soon there were six of us. They expected only seven. We ended up with nine! And we figured we couldn't do a full-flung exercise. If we would have been with more, we probably would have had to find Rob and get him out, or something like that. But now we thought we might just have a recce. Or maybe do some comms work. We did the latter! But first we had to get in. We walked up to the entrance and rigged the pitch (as that's the way to get in). I kept my hat and jacket on! And took them off once inside.

When we were in there Edwyn and I went on a small recce until we figured everyone else would be down too. Then Gethin and Tony went on a recce; could we rig a pitch somewhere? When they came back they decided the best space for a pitch was too far away, so maybe just do some comms. We sent Dave into the mine somewhere with one Nicola and set up the other one at the entrance. And we tried to communicate! It was not a success. After a while we figured we might try the cave links instead. We had only one set of antennae, but the cave links can work wirelessly if they are close enough together. They worked when directly next to each other. Then I took one to Dave who was somewhere. They said I couldn't miss him! But after w bit of walking and crawling and scrambling I came to a junction with an impressive shaft. Where to go? I dumped the cave link and started off on a recce, but soon I heard sounds. It was one of the Tony's and he told me Dave was the other way. And that was true! 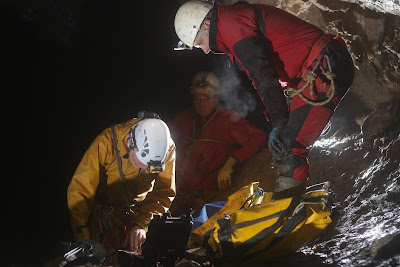 Setting up the Nicola. Pic by Gethin 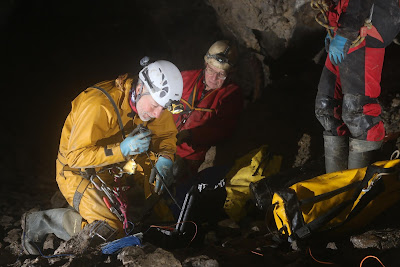 
Dave exchanged the Nicola for the cave link and had similar success with it. I did a bit more reccying. And after a while one of those who had still been in the entrance chamber came to tell us how it had gone. And we decided to break up.

I went back and tried to wind the wire antenna back as tidily as it had been. That was a non-starter! It turned out it had never been unwound before. And in the meantime, people started prussicking out. By the time it was my turn I came out to find the pitch fully rigged. Blimey someone had been busy! And Rob was behind me; Gethin suggested we could decide he was the casualty and haul him out. And we did! The rig was with two equally tensioned ropes. And that worked fine! But we had a deviation, as you do when you want to haul horizontally while the pitch is vertical. And the difficulty is generally when the casualty is the top of the pitch, where the direction of hauling has to suddenly change direction by ninety-ish degrees. You do that by releasing the deviation while keeping on hauling. That didn't go quite perfectly; the deviation turned out to only be releasable with great difficulty, and the haulers forgot to keep hauling, so the casualty was dropped unceremoniously to the muddy ground. But we still had Edwyn down there! Let's see if we could do better with him. 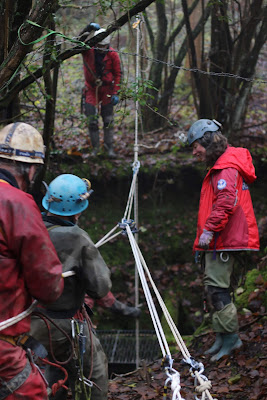 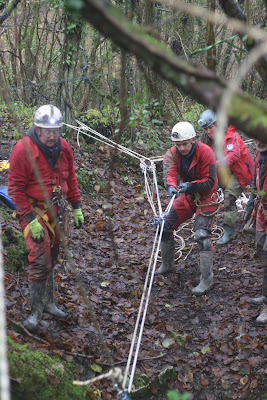 
We exchanged the rig or ID or grigri or whatever it was we had been using before with an Italian hitch. And tried again! This time flawlessly! And when Edwyn was back on the ground we were done. We de-rigged and went back to the cars. We had a quick debrief and then were were all done!

I managed to eat two sandwiches and quaff down one and a half hot flask of tea before we set off. And then we drove back through the fading light. It had been OK! But I didn't want to do all too much anymore that day...
Posted by Margot at 09:23