We had been having a new chap for a while and he hadn't been to Parc yet. So we needed to sort that out! And Miles was busy so I wouldn't be digging.

I drove to the parking lot and soon David and Paul appeared too. No sign of Ian yet! Or anybody else, for that matter. When nobody had shown up by 18:30 we decided to just go. And we would take a detour: David wanted to throw a bottle into a shaft we had looked at before (during the disastrous night) as he suspected it might come out in familiar terrain in Parc. The stopes are so high, they could easily lead to unexpected things!

We set off. It was a much nicer night than the previous time. It was a nice walk! I noticed very soon, though, that my new light came with complications: the whole lamp is in one piece, and that is evidently fixed at the front of the helmet, and that makes it front-heavy. It made my helmet dip over my eyes! That was very annoying. I'll have to think of something to sort that as this is a pain. Especially when trying to wrestle through shrubs!

And we found the shaft. The bottle went in, and we could hear it bounce off the walls for what seemed like ages. It goes forever!

Then we walked on. We knew the rough direction to walk in so we just went for it. We lost the path at some point, and plodded around on a steep mossy slope where your feet would sometimes sink down two feet. But at some point we got to a path. And then we found something David recognised: another shaft of Parc. I had not seen that before! And something, or rather someone, found us there. We saw a light in the distance. And it came closer! And it was Ian! How had he found us? But together we now went to the conventional entrance. 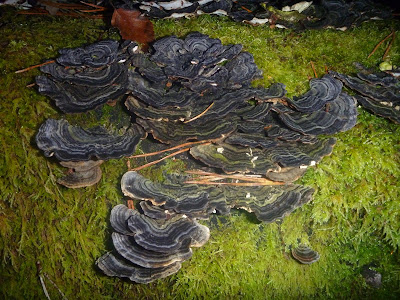 Some nice mushrooms we saw along the way

When in we first had a look at the old tidal experiment. Beyond it is the ladderway up the shaft of which we had just seen the top. I had never actually scampered up some of the ladders. It was beautiful! 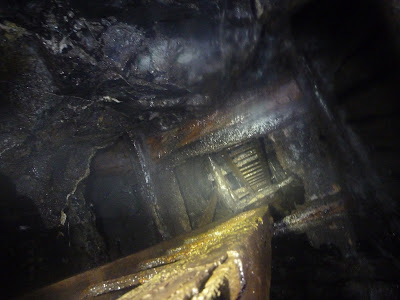 The we went into the mail lode. Ian was impressed! And rightly so. David went into tour guide mode and showed him all the good bits. And we took some pictures along the way. 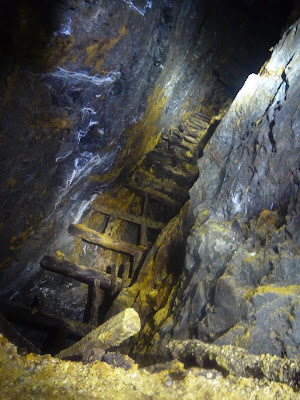 We got to Endean's shaft and there David decided he would have his sarnies while the rest of us went on, be it up or further along. But I liked the idea of sarnies. Ian wanted some tea. Paul had not brought anything but he is always up for a break. So we all sat down!

I tried to sort my sagging helmet out. I figured I could perhaps use my hear to rest the edge of the helmet on. I first tried to have a knot in the middle and that did keep the helmet up, but it blocked my view itself. So then I tried two knots on the side. That worked! And I looked a right plonker but who cares.

In the meantime, it turned out that only Ian was keen to go on, but he also had a lingering injury. So we decided to not go on at all. We just went back out! Along the way I noticed that my helmet plan worked but it was rather uncomfortable to have dreadlock knots pressed into my forehead. I need a better plan!

We were back at the cars at a reasonable hour. One day we should take Ian up the ladderway to Endean's shaft. He'll like it there! 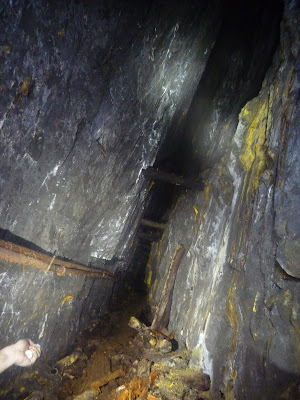