Climate is fashionable! And my inbox showed it. I had received a mail about a public lecture with the title 'Climate change: hope from despair?' by Kevin Anderson, a professor of Energy and Climate Change at the University of Manchester, on a Wednesday. It sounded interesting, but I see Jenny on Wednesday nights! And I knew she tended to see someone else just before me, so we couldn't just both go and talk about it in Welsh. I mailed her anyway; sometimes her session just before mine ends up cancelled. Maybe this was one of those weeks!

Then on that Monday I got another mail. About two talks! One was that Tuesday. It was getting busy. The other talk, about receding Arctic glaciers, would be the next Monday, but I have Welsh class then. It looked cool tough! It would be given by an Aberystwyth glaciologist.

But the talk I could go to was called 'Climate Justice and Environmental Justice' and would be delivered by Eurig Scandrett. A Welshman, by the looks of it! Although his affiliation was Scottish.

I went. The talk was organised by, among others, the North Wales Quakers. I had not encountered them before! I was aware of them though; I bike past their building almost every week. It wasn't very busy! I had advertised it to my students but I saw none. And I only saw one other person from the School of Ocean Sciences.

The bloke turned out to be associated with Friends of the Earth, and was, if I understood it correctly, half activist and half academic. His field of work was sociology. So he wasn't looking at the physics of anthropogenic warming, but more interested in what can be done. And he was a fan of the grassroots movements. He was especially interested in the Bayou Bridge Pipeline, and the people opposing it. It is a hotbed of environmental injustice; the area already boasts a neoprene factory that belches out such substances as to have festooned the area with the nickname 'cancer alley'. And you can guess what demographic lives there!

Other than that he likes grassroots movements I did not get an awful lot out of it I'm afraid. I like grassroots movements too! Luckily these are now widespread in the climate sphere too. Not thanks to me I'm afraid. I suppose I should speak louder! I educate people on climate science, I always vote some sort of green (but my vote feels distance as I can't vote in my country of residence), I try to do my bit in my daily life, but I haven't been out there on the streets in a protest. I should make more effort! 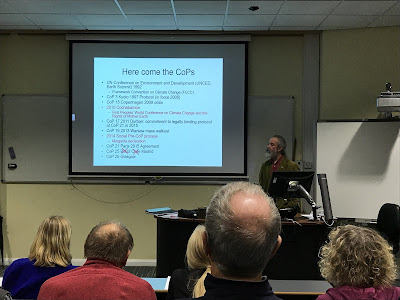