We had three more days in the field with first-year students on the cards! And one would be in the first week of term. We had to figure out where to go! On Friday I asked Dei. He said he didn't know. Oh dear! He figured we should have a look at the tides as we had two beach locations left, and one inland one. If the tides were high at the wrong time we should go to the inland location, which was Parys Mountain. And we hadn't done a recce there yet! Dei suggested we may have to do that in the weekend. Oh dear! Enough to do already. But well, it has to be done! And he figured he had to do a big walk with the dog anyway. He might do it there! And then I remembered I had a 'Welsh in the Workplace' exam on the Monday, so hanging out with Dei would be the best preparation. So I said we should just do it!

After Dei had gone home I checked the tides. They were very high in the middle of the field day! So it looked like we had no choice. And David reminded me of how sore Millie's paws had been when we had been in summer, so I warned Dei. Oh dear! That meant the end of the dog's involvement.

I got to Parys Mountain a bit early. That gave me a chance to have another look at my Welsh dictionary; I might have to brush up on some specialist terms. Then Dei appeared. Without dog! So we just set of with the two of us. And it was a bit weird; Dei had not only not been looking at the local geology; he had never been to the site at all. From the mine, you can see the places where he has lived the first 21 years of his life. The mine dominates the landscape. And he had never been!

We went to the viewing platform overlooking the big pit. Dei was impressed! I told him what I knew about the place and he checked the book we use as an inexhaustible source of information. Then we went on to where 'black smoker' sediments were exposed, and to the 'central boss' where you could see all the hydrthermal veins that had once fed the black smokers. And we saw the head of the fold. That was pretty much what I knew to show him! And from there we just followed the 'geo-trail' (indicated both in the book and through little signposts) that takes you past all the major industrial relics to be found there. I didn't feel like just going back; it's quite a drive. And we might take the students along the geo-trail as well! And it was quite lovely! And we had a cup of tea at the engine house. And after that we soon were back at the cars. It had been a good recce! And let's hope the students like the place too! And let's hope too that the weather holds... 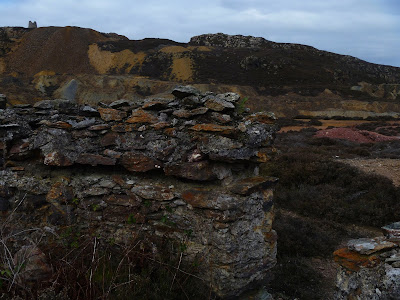 Pic from inside a calciner, with the windmill in the distance 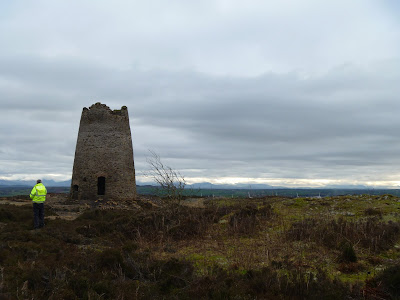 Dei, the windmill, and some more modern (and functioning) specimens in the valley below...