Rescue training after a while

The last time I had been out with the rescue team had been in spring. The training sessions since had been when I was not available! And I had completely forgot there was a January session. But well, Welsh hadn't started yet, I can use my Tuesday evenings for such stuff! So we piled into Paul's car and went to Plas-y-Brenin for some hauling training. And there were many of us!

Those in charge of the training decided we should subdivide into groups. Two groups would haul and one would do some first aid. I had done my Casualty Care a while ago, but not practiced since, so I figured I could use some brushing up. Lou, one of the other CasCarers (but one who keeps her skills up to date as she is a member of a surface team), talked some of us again through the initial casualty check. Our PhD student Ed was a willing casualty. We even log-rolled him in a typical confined space! It went well.

When that was done we swapped. I was now part of a bunch of people rigging a Z-rig. It was a bit vague as I wasn't quite sure what we needed to haul from where to where and that doesn't help, but things gradually became clear. And I ended up being hauled! So much for my Z-rigging skills. Then we hauled a chap up and down. And then we would, all together, do an actual stretcher haul (we had just been hauling people by their harnesses). We would haul Paul from the floor to the platform higher up. And putting him in the stretcher worked, and hauling him up worked too, but it proved hard to get him around the corner. A second rope was rigged and I climbed it, so I could attach the feet end of the stretcher to myself and then forcefully prussik up. It worked! We got him up. Then we lowered him again. 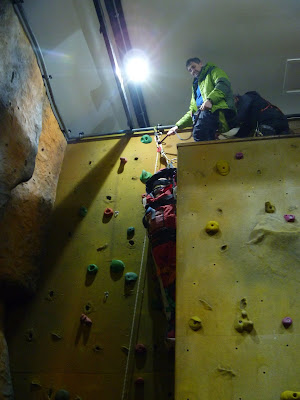 Paul got to the ledge - how to get him over? 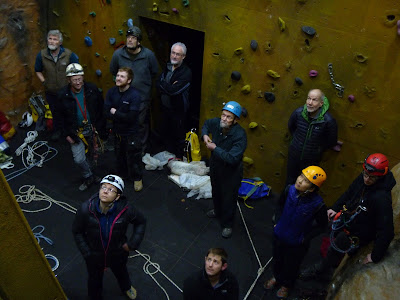 I'm up to make Paul tilt, and this was the view 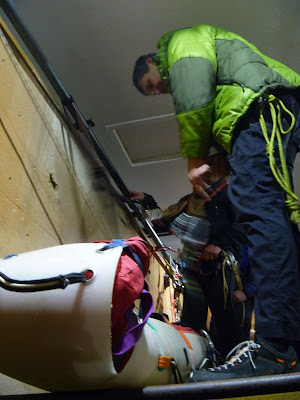 When that was done it was time to get Paul out, get our SRT kit off, and put the kit in the appropriate bags. It had been useful! But getting Paul over the ledge gave us the idea that in the future, we should have an entire training session on getting stretchers around corners. It's hard! And it seems it has sometimes really caused difficult situations in the past. We had better be prepared!