Weather too shit to dig

There was a weather warning in force. And it was Thursday! Oh dear. I wasn't quite sure what the conditions in Snowdonia would be like. It doesn't have any road cameras. So in order to decide if I could go digging I had asked Miles to let me know what it was like.

While I was sitting in my cold office around which the wind was howling menacingly, I got the requested email. Miles mentioned it looked like Siberia up there in the valley where the mine is, and that he was getting out of there himself. He was in a clunky 4WD, so he'd be fine, but that meant there was no way I would get there. So the dig was off! And so was the other Thursdaynighter trip.

I figured it had been a wise decision when I went to the other building and was almost blown over. Oh dear! It was really bleak. I had to borrow an electric heater to manage to crank up the temperature to 12 degrees. Still so cold you can refuse to work, but that work won't do itself. I stayed! But I was glad I was wearing long Johns. And I didn't take my jacket off until I was home again. It would have been quite snug in the mine, but trying to get there, and back afterwards, would have been quite the opposite of snug! 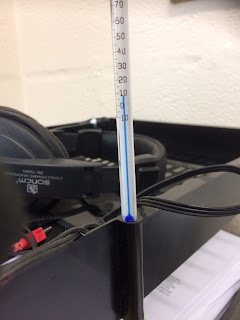