Safety in the dig

After a week of not working in the dig due to adverse weather conditions we were back. The adverse weather had left some scenic scenes! There was foldy snow/ice on the lake, and the entrance was festooned with icicles. Very nice! 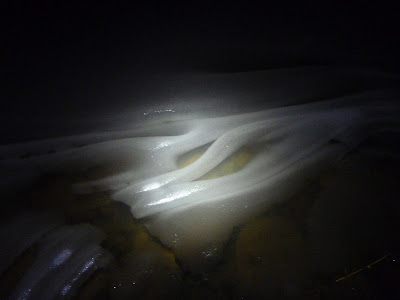 Foldy snow/ice on the lake 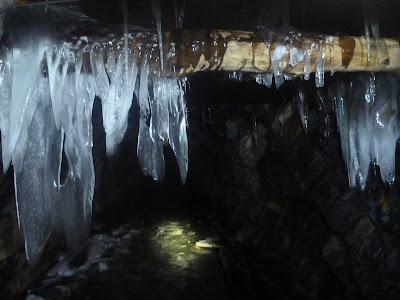 The previous time we had left with the dig all ready to receive a bit of supporting. The ceiling of the cavity we're working in now is a big slab that is quite convenient; it keeps us safe from what's above it. But only as long as it stays put itself. On one side it didn't seem to be resting on all too much. This time we would support it with a piece of scaff. Miles had brought the swivelly brackets so all was ready! We hoped.

When Miles tried to fit a bolt through a bracket we realised we weren't quite ready yet. It didn't fit! He suggested using resin and thin rebar (or something) instead. I suggested drilling out the bolt holes. My plan won! But it did mean having to retrieve a drill bit from the top of the dig. But I had to go there anyway, to measure how long our piece of scaff had to be. I scampered up while Miles did some housekeeping. I came down with the drill bit, and a piece of polyprop the length of the desired support. It looked so short! So short, actually, I checked the older part of the dig to see if we may have some pieces of scaff that size already. In the meantime, Miles drilled out the holes. The scaff I came back with was even shorter, but well, it had been worth the try.

We then had a bit of a 'but where IS our scaff bar?' moment. The things you manage not to think of. We found it, Miles cut it to size, and we could go up to put it in place. That went well! Comfortable it wasn't, but well, digging isn't. We had our bar in position! We could feel safe now. 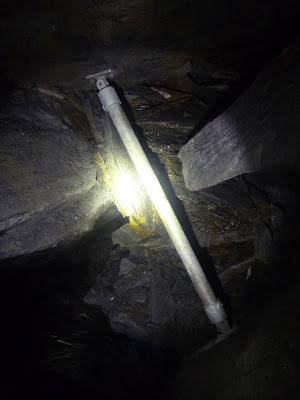 Miles took the opportunity to start clobbering the rocks that were on top of the big slab. He did well! He brought two big ones, and quite a lot of small ones, down. Good progress! I hope next week we can chip a bit off the now secured rock so the opening to what's above it becomes a bit bigger. That should make it easier to remove more stuff. And then maybe, just maybe, we are finally close to a breakthrough again! It would be about time!