After the initial two strike days I went back to work. I had a student conference coming up, on a non-strike-day, and I had to prepare that. So on Monday and Tuesday I was being a scab. A traitor! Oh dear. But then I went back to the picket line on Wednesday. This time I went to the main campus. I didn't really expect an Ocean Sciences picket line anymore!

While I biked up I was overtaken by my rather fast colleague Stuart. He is one of our main strike enthusiasts! I knew where he was going. We parked our bikes and went to the picket line; that was well-manned. We decided to picket at a different entrance. Stuart scored a hi viz vest, and we both got a pile of flyers. We were ready!

I was wearing long Johns under my trousers, and I had brought my down jacket. I needed that! It was cold there. The main building is on top of a hill. Stuart didn't seem to be wearing much considering the circumstances. I suppose he has some inner fire to keep him warm. He was really good at engaging with people! I am quite sure he had voted for the strike. I hadn't. You can tell the difference.

We mainly talked with students (of the business school, mainly) and other staff, but there also was building work going on, and we chatted with the builders too. Initially they were skeptical; I suppose they earn a fraction of what we earn. Especially Stuart with his professor's salary! But after some talking they decided we were essentially in the same boat. We need to show our employers from time to time they can't walk over us! They quite sympathised. And when a chap with a charming dog joined us the atmosphere became even more cheerful. One of the builders had a dog just like that!

At one point a lady from the cafe in the building came out with a tea for us. That was nice! It did lead to Stuart breaking his own picket line in order to go to the loo, but hey ho. But after some two hours we figured we had done our bit. While walking back to the main entrance we came across a bloke from my Welsh class who was striking too. I hadn't seem him in a while! Life events were stopping him from showing up. But after saying goodbye to him we went back to our bicycles. Talks had restarted, but it remained to be seen if that would result in enough to call off the rest of the strike. I might be doing more of this! 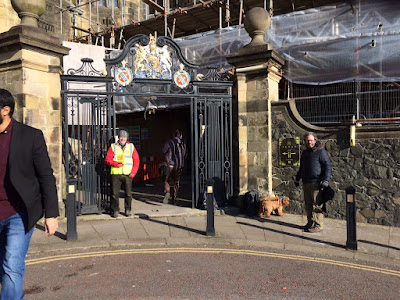 Stuart with hi viz vest and flyers, and chap with charming dog