God and the gin shop

I might have been learning Welsh for years now, but it's still difficult. I can read alright, but understanding what people are saying is a different thing. In class it's always something I struggle with. I need practice! And then an email landed in my inbox. A well-known Welsh newsreader (well, he reads the news in English, but he is Welsh) would deliver a public lecture about research he had done on the history of Welsh chapels in London. "Duw a'r ginsiop", by Huw Edwards. That sounded interesting! I have no specific interest in chapels, but I like history, and this would be a good exercise. A lecture by a newsreader; that would be rather clear and well-articulated! So I could focus on the Welsh. And Huw Edwards is from South Wales so speaks South Welsh, but the difference isn't too big. I have read, and am reading, several books in South Welsh so I'm fairly familiar with it.

There seem to be (and have been) lots of Welsh chapels in London! And several kinds as well. Glossy ones for the elite, and shed-like ones for the unskilled workers that would have come walking from Wales to look for work. He had found evidence for preaching in Welsh since 1715, but he was sure it had happened before. William Morgan, the famous translator of the Bible into Welsh (which he completed in 1588), had frequented the capital. Would he really not have preached in his native language?

He also traced what happened with all these chapels. He spoke of evictions and damage in the Blitz and rebuilding and whatnot. I must admit I only got about half of it, but well, that's not bad. I missed several of his jokes but what can one do. I did start to think they're not letting him use his full potential at the News at Ten; here he was walking around animatedly and gesturing freely. Very engaging! Better than sitting behind a desk.

I listened with a woman who is in the same Welsh class; she had brought her father and her husband. The father was actually quite involved in Welsh chapels, and he kept bumping into people he knew. I suppose most people were here because of their religious/cultural interests, and not just to listen to someone talking Welsh! The husband didn't speak Welsh but he would use headphones with simultaneous translation. I also saw my colleague Dei!

At the end of the talk there was an opportunity to ask questions, and then it was time to go home. I was hungry! I had intended to have a sandwich before the talk but bumping into Fiona had distracted me.

Oh and the gin shop? It turned out that one of the earlier organisers of Welsh preaching in London earned his money with, among other things, having a liquor store. A bit unexpected considering the domination of Methodism in Wales, and the general view on alcohol use by Methodists, but well, if it helped people find a religious community far from home, then why not? 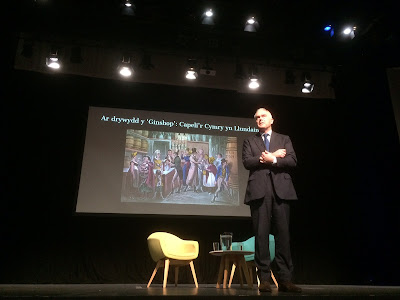