The day approached rapidly! Of the somewhat altered Palaeoceanography practical. The weekend before I reorganised the assignment. I made the actual practical less work; I had assisted on it before, and we had always had three people available to help the students out. But with James and his research group gone, I was the only one left able to teach this sort of thing. I thought. And if it's only you, there needs to be less work!

Then on Tuesday I was teaching in the geography building. Between lectures I ate a sandwich in a corridor. Lynda found me there and invited me into her office. She was about to have some lunch too! And in between bites we had a chat. I mentioned the practical and she said she had done forams in the past. She was willing to help! She's a life-saver.

On the Wednesday I went down to the lab to see if all was ready. To my surprise, one of the lab techs welcomed me with the samples. The missing samples! She had no idea they had been missing. Oh well. Let's use them then, if we have them! I also had a look at the samples; I don't work with planktonic forams very often. I needed to get my eye in again!

On the day itself I started giving the students their spiel. Quite a lot came in a bit late; that was unfortunate. I don't want to do it several times! I told the students what they could expect and what I expected of them. Then I handed them all, in pairs, a sample and a hand-out. They were on their way!

During the walking around I saw I had accidentally given some students samples with the wrong size fraction. Students tend not to question what you do, so I had to notice it myself. The hand-out mentioned the size fraction but well, would I have checked? Probably not. I rectified the situation.

The practical rolled on. Students didn't spend much time picking! The samples were pretty much 100% forams, so you pick a hundred in a jiffy. But then they had to find out what they had. A lot of students had missed the spiel, and hadn't really clocked I was only interested in one species. And they hadn't clocked they may encounter benthic forams, but that they did not feature in the hand-out. The issue with benthic forams is that there are so many species of them, that the hand-out would be the size of the phone book if we would include these. There aren't many planktonic species! And the hand-out was quite clear on that but then again, students don't necessarily read that stuff, not even if they missed the spiel at the beginning.

The identification took the bulk of the time. And some students insisting on going down to species level. But time progressed and at some point I refused to check the identification to higher detail than needed for the assignment. We had the lab until 6PM; I didn't want to be in there longer than that!

During the checking of the IDs it turned out a few students had still worked on the wrong size fraction, and quite some students had worked individually and not intended to hand in their results as a pair. But we got stuff sorted! And by a quarter to six the last students left. And we too, of course. Lynda had stayed all the way until the end. What a woman!

I dumped the data sheets in my office and offered to drive Lynda back to her office. And then it was time for me to drive down to Tanygrisiau! It had been a long day. It was nice to go and lug some rocks around, after a day like that.

Was the practical a success? Well, overall I think it was. Not everything went well. Why did we even have all these different size fractions there if we only use one? I know I should have checked them all but I also know I get rushed if I am faced with a stampede of students. It would help if I make sure I can't pick a wrong sample; that's easier than check them there and then. And how do you get the students to read the hand-out if they haven't quite heard what is expected of them? And next year, if there is a next year, we should try to have three people checking. Stef, the lab tech who had the samples, was willing to be trained up! So I still don't know if I will do this again, but I know what changes I would like to make... 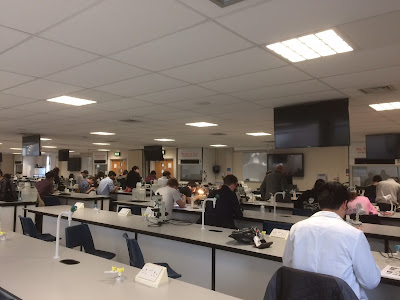