I am Imelda Marcos! Almost, anyway. I spent decades walking in shoes with orthopaedic soles, but I had successfully ditched them about a year ago. I still have all the shoes I used then. But without the soles, I need smaller shoes! For all purposes. Including hiking. And I had bought a cheapo second-hand pair of light hiking boots to see if I could indeed hike without soles. I could! Then I also bought a larger pair of clunky boots. And used the light boots; I hadn't been on crampons since buying the clunky boots. And they do the job, but the are leather, and when they get wet they don't dry. It takes a long time! And they also smell appallingly when they are wet. Which is always. And somehow my left heel started hurting in them. It was time for another pair and I was thinking of plastic boots. They dry out quicker!

I had tried to buy such a pair on internet, but they were too small. I decided to stop buying such things on internet and only buying stuff I could try first (even though one does not exclude the other; sometimes you find local sellers, so I had managed to buy second hand waterproof trousers and the aforementioned clunky boots through internet, but with trying). But before I even put them out for sale again I had been contacted by a woman who wanted to buy them from me. And she wanted to meet in Betws-y-Coed. That sounded good! I could go for a small hike nearby, and then sell her the shoes, and then pop into the outdoor shop next door (Bangor is hopeless for that) to buy a new pair. So I did!

The woman was very nice and was happy with the boots. We had a small drink together and talked outdoor stuff. It was nice! And then she left and I went next door. I first had them order a new pair of trousers. I went to the shop as these are also best tried first, but they didn't have my size, so I did have a gamble after all and assumed the size down from the too big ones I tried would be good. Oh dear!

Stay tuned for the trousers! But here are the shoes: I don't like the look of them, to be honest, but they do what I want them to. They are light and plastic. And they fit. I'll try them a bit indoors to be sure. But maybe I found myself a nice new pair to last me comfortably for years! 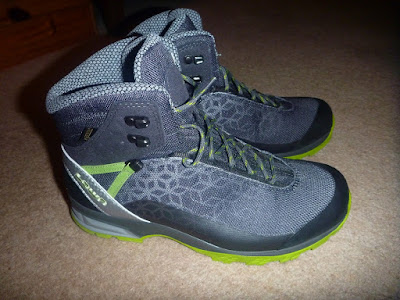