I think it was in Norway that I bought a headlight. A black diamond. I can't find mention of it on the blog, but I think I bought it for skiing in the Arctic night. Although I tended to do that in moonlight. Oh well! At some point, before I moved to Britain, I bought that light in question.

When I started caving, it became my light for that. It was a bit weak for that purpose, though, so after some six months I got myself a proper miner's lamp.

Since then I have changed lamp several times. The original Norwegian lamp was now a headlight for hikes and such again. Such as the Swamphike!

The lamp must be quite old now! At least eight years old. Possibly ten. And it still work perfectly well. But over time, the elastic band has become less elastic. It is all floppy and doesn't stay in position. Not good! So after the latest Swamphike I decided to change it. I bought some inch-wide elastic band, cut off the old stuff, and stitched the new stuff into position. It wasn't much work! And now I have a perfectly functional headlight again. I like keeping things going! 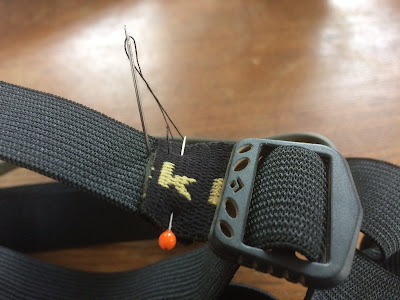 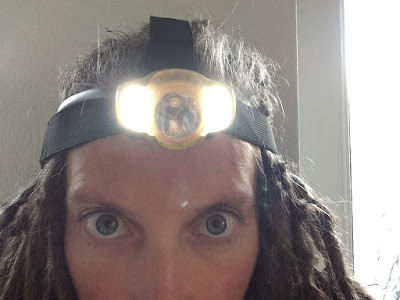