On Wednesday my Dutch hiking friends would travel to Wales. They would get here around noon! So I had taken half the day off. And the two consecutive ones.

On the preceding Sunday I had done most of the preparations. And on Wednesday I went to work to get done what I could get done before I would head off! And it was around a quarter to eleven when suddenly my computer went 'poeink' and died. A power cut! That happens more often, but generally it doesn't last very long. I decided it was coffee time anyway so I went to the other building.

On the way there I found out what the problem was; a lorry had tried to make the rather tight bend just below my building, but hadn't managed. It had rammed an electricity pole and damaged the cables. It was rumoured the entire lorry had become live! But nobody had been injured. Good!

It looked like this would take a while. I decided to go home! I could do some last preparations before the hikers would appear. And then we would be off! 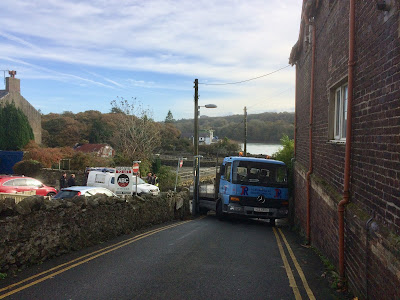