Roelof and Micha in Wales

Roelof was a faithful participant in our yearly autumnal hikes. But this year, he decided to do things differently! He wanted to show the area to his fiance Micha. And so he did!

They would arrive the Friday before the swamp hike. I suggested we meet on Saturday, and we did. It turned out that would be a day dominated by storm Brian. Strong winds and heavy rain all day! Oh dear. I imagined a lot of huddling by the fire and drinking coffee.

I put on my hiking trousers and drove down. I had briefly wondered if I should bring a change of clothes but somehow lacked the motivation. Stupid! I had my head all filled with the much bigger hike to follow and didn't take this very seriously.

I found their stunning little converted barn in a beautiful landscape. This was Wales as it should be! Roelof had heard me coming. It was good to see him! Minutes later, Micha appeared too. We very snugly had coffee and pancakes. Then Roelof made a plan. He wanted to walk through woods today; a bit less exposed than open terrain! So we headed for the Capel Curig / Betws-y-Coed area. We plonked the car in Cae yn y Coed and started walking. The paths there are a bit confusing, especially in combination with the map, but the surroundings were lovely. It was nice! And wet.

Soon I regretted a bit I wasn't wearing waterproof trousers. But what can one do! I embraced the wetness. And the autumn colours were lovely. 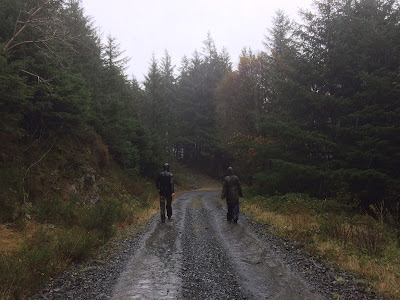 After a while we got to Pentre Du. We crossed the road, crossed the Miners' bridge of which I was slightly embarrassed I had never visited it before. It was beautiful! And we then followed the swollen river upstream. We passed Swallow Falls; normally you see separate streams coming down the rocks. Now it was one big white churning mass. Then we went on. 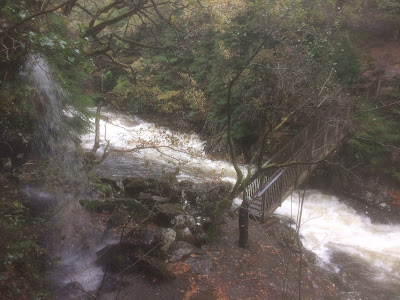 The Miners' bridge! Notice Roelof staring into the water.

When the path left the woods it also left dry land. Oh dear! It normally runs close to the river, but now it was in it. Roelof suggested we just walk through the fields; farmers would understand. I was skeptical. And indeed, within seconds an angry woman came out of a farmhouse and yelled at us. We found a compromise; we walked over the wall between river and field. 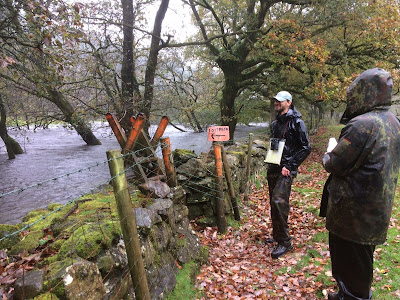 We then had to do some wading and then we reached our intermediate destination; Ty Hyll. We had visited it before, two years ago! We revived ourselves with hot chocolate, coffee, and baked goods. Nice! Then we went back to the car.

On the way back we popped by a shop. Then we went back to the cottage to try to dry up a bit. We tried the wood burner but it was a bit temperamental. Roelof and Micha put on dry clothes and I just set out to hover above, and hug, as many heat-generating units I could find. It did get better!

We went out for dinner. We chose the Heights. I had only been there for my ill-fated fell race! Time to give it another chance. It was a bit busy as it was Saturday night but we found a table. It was a rather local place! When I went to get drinks I chose to order in Welsh as people looked at me funnily. I think I had 'foreigner' written on my forehead. Yes, but a local one!

After food (of varying quality; mine was fine!) it was time to call it a day. I had a hike to sort out! We said goodbye. They had a much drier day (I know, not hard) to look forward to!

It was really nice to see them! Although we will miss Roelof during the swamp hike. I hope they have a lovely week in Wales!
Posted by Margot at 16:38