Sent home by a storm

The morning was quiet. Quiet and clear! But there was a weather warning. One had to place one's faith in the MET office that this pleasant day would end stormy! Storm Ophelia was on its way. I did trust the MET office and drove in as I was a bit under the weather and didn't want to bike around in a storm. I had a tutorial on the mainland so it was more travel than when I'm just in the office. I was hoping travel wouldn't be too disrupted. It's not far, but the bridge is a bit of a bottleneck!

The first thing that was odd was the sun going funny. It was widely documented; there was forest fire smoke and Saharan dust in the atmosphere, and therefore the sun turned red. It was quite beautiful! I didn't manage to take a decent picture, but well, I pointed it out to David and he did. I'm glad he did! 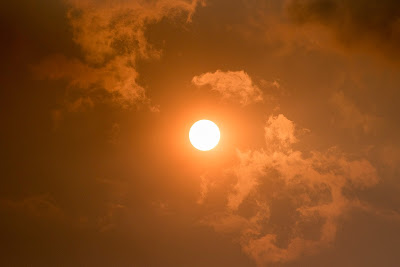 David's pic of the red sun

Later the wind picked up. An email had already gone out that all field trips would be cancelled. Seemed fair; my colleague Dei would be taking students to Rhoscolyn, and that's not a place you want to be in heavy wind. But while it still didn't look menacing outside another email came in; the university expected trees falling over and power cuts and mayhem and would entirely close at 2PM. Eh, OK! Not ideal; I had a lot to do, but hey ho.

I dutifully logged out at 2PM. Then I went to the door. It was 2:03. The door wouldn't open. Oh dear. While I tried in vain to phone security (they can remotely open it from the mainland) one of the technicians appeared. And then Jaco. The technician did the reasonable thing: she phoned the head technician. In the meantime Jaco tried to get out through his lab, but he couldn't even get into it. The place had properly gone into lockdown! I'd never seen anything like that.

Then the head technician appeared. He managed to get out, via the wheelchair route, and tried to then open the 'normal door' from the outside. He couldn't! And seemed to not be able to get back in either. But he told the other technician to go out via their storage room. That worked! The door into it had a digital lock, but it was a stand-alone; the outside door had an old-fashioned mechanical lock. We were free!

I went home and continued working there. It worked alright! There were no power cuts.

At some point I heard quite a racket. I had a look; outside, my top recycling bin was somersaulting through the back garden, independent of its lid. Oh dear. I could see my neighbour's bin felt like joining. I took both sets (we have snazzy stacks of three boxes for different recyclables on a trolley) into my garage, and threw a note through the neighbour's door that I had nicked his bins but would put them back after the storm would recede.

Nothing else really happened! Ophelia blew over some trees in town but that was all. Fine with me; Doris wreaked a lot more havoc and, well, we can do without! 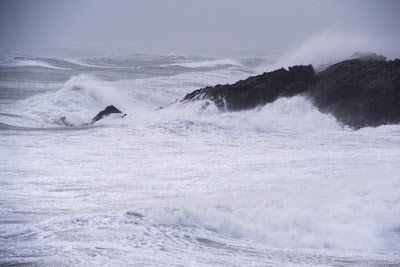 David went to the beach (the same as this one) to photograph waves when he was booted out of the office!