After three weeks at sea I was glad to step on land again. There's rock there, and trees! So after three more weeks at sea, I felt a desire to get close to these rocks and trees. And I figured that after six weeks of working 12 hours a day, every day (yes, except the port call and transit back to Southampton) I had earned a half day off. And what's the most iconic clump of rock around here? Indeed! Snowdon (or yr Wyddfa). With its 1085 m a nice landmark. So I decided to get up early and scale it. Just to celebrate land!

The getting out early only partly worked. I had buggered up the alarm, so I was only up at 6; then, when I got into the car, I noticed it hardly had any fuel left; and once I had crossed the bridge, it dawned on me I had forgot my wallet. Oh dear. All in all it was 7.30 by the time I parked up at Llanberis pass. But that was early enough; there was plenty of space on the parking lot, and I seemed to have the path to myself. I took the Pyg trail. It looked nice! And it was. 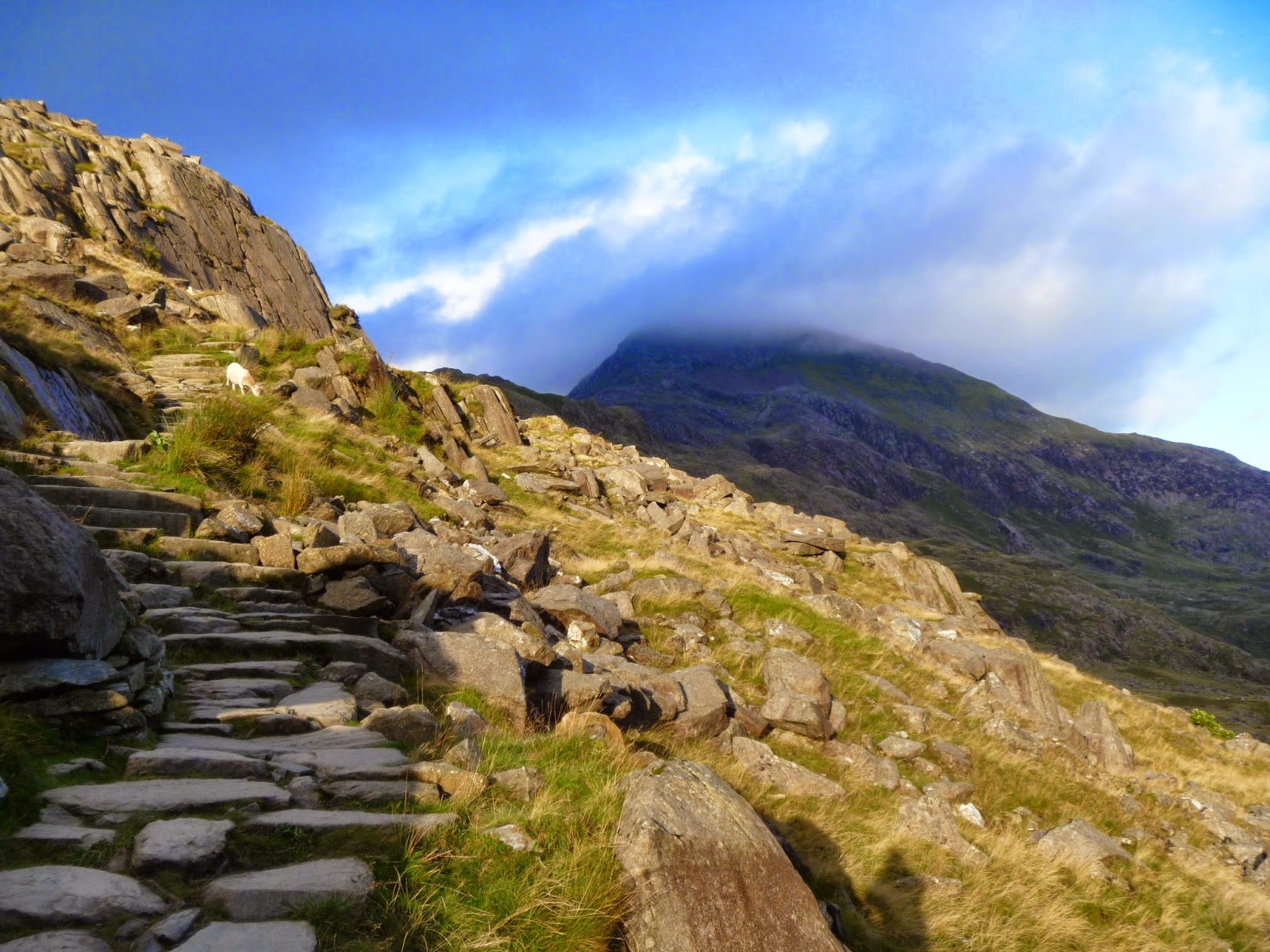 The start of the Pyg Trail

It was a beautiful day, with sunshine and menacing skies. I enjoyed myself immensely! The views were amazing. When I got close to the top I ended up in clouds, but that was what I had expected. It was still nice! And just below the top I met two Germans on holiday. They were nice! But I was faster, so I reached the top alone. I didn't linger; I pretty much had to hold on to the triangulation bollard (of whatever it's called) to not get blown off. In the valleys the weather was mild, but here it was bloody polar. Made you feel you had covered some (vertical) distance. 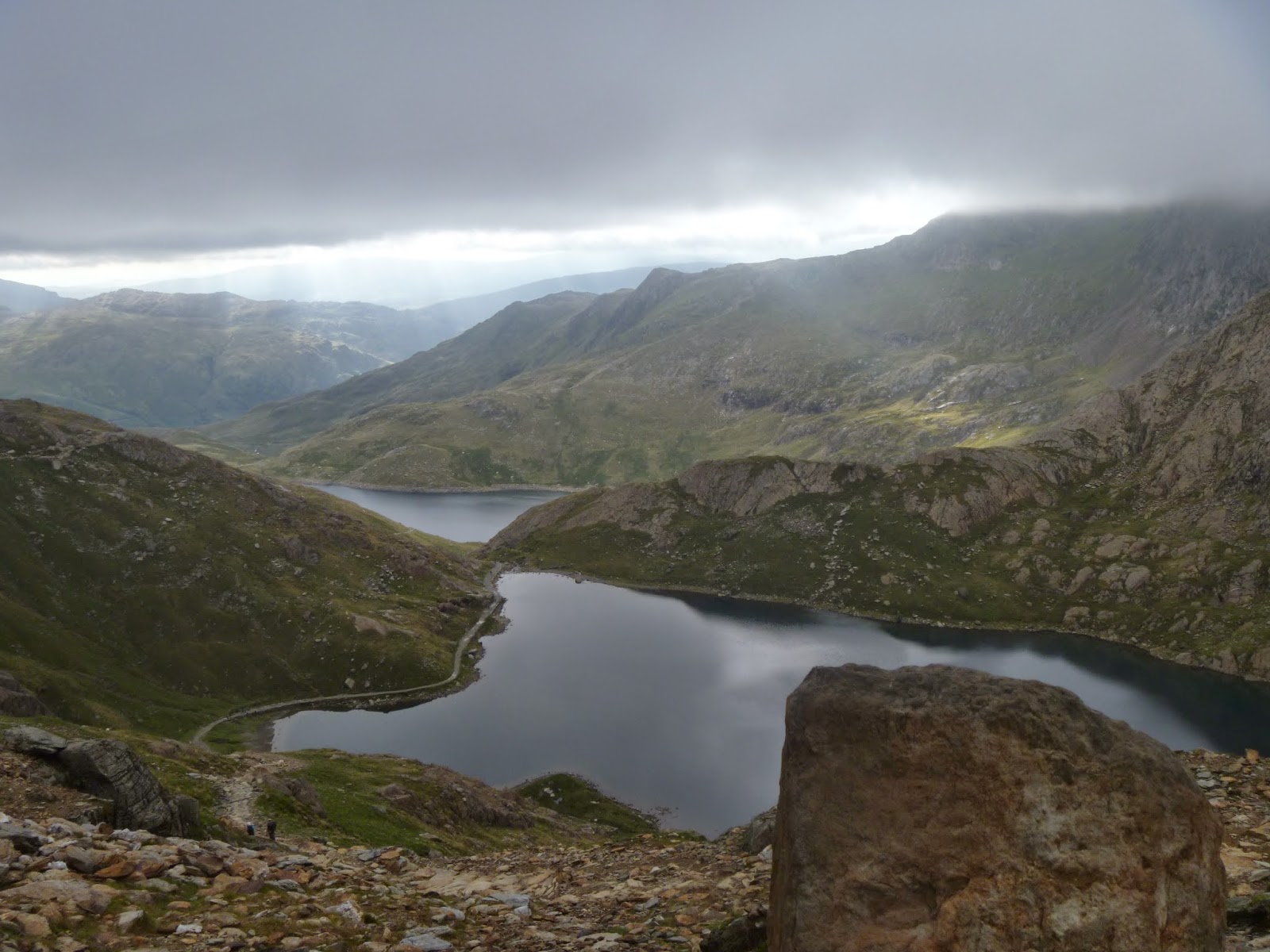 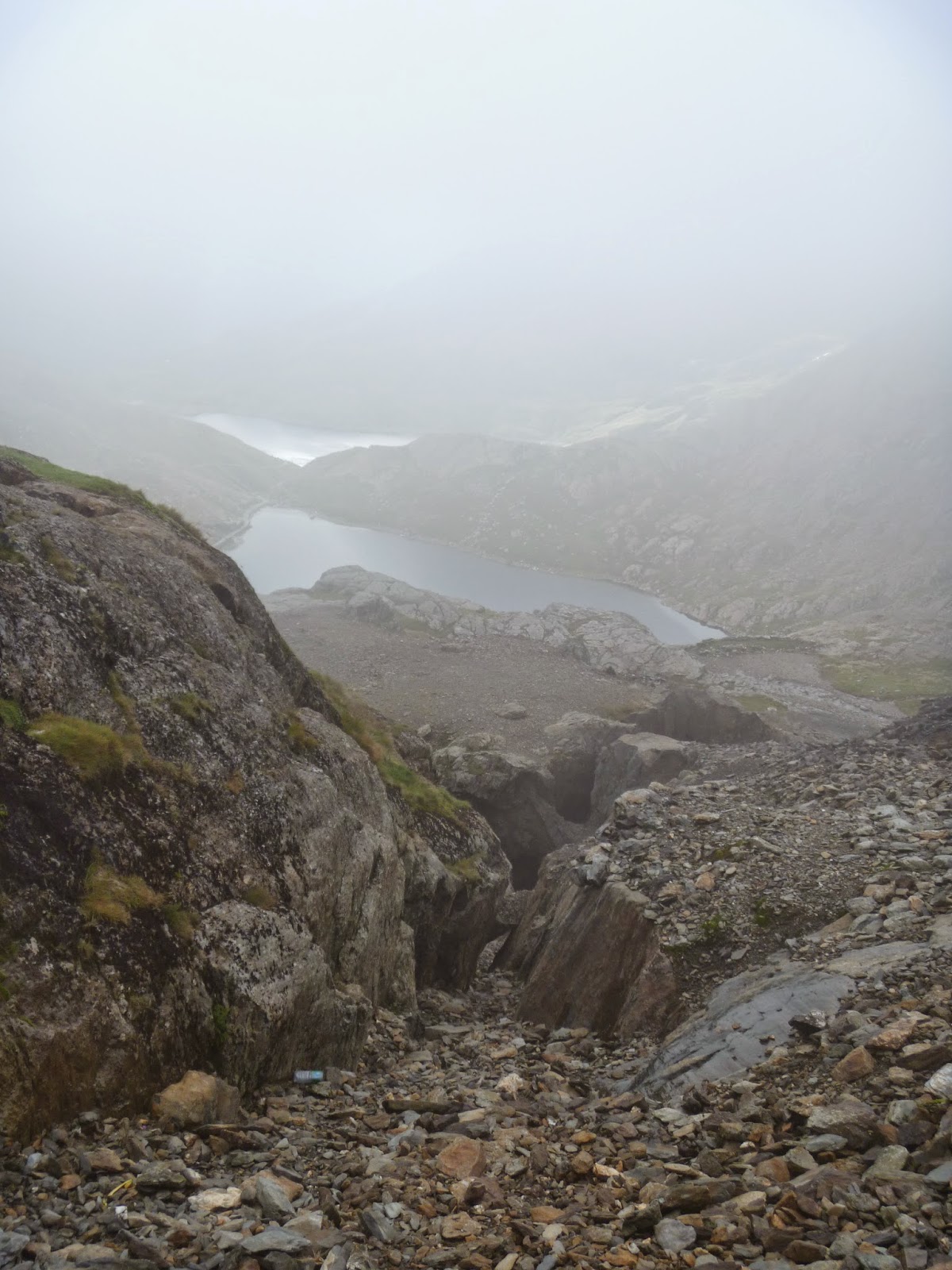 Upon reaching the clouds I also reached an old mine! 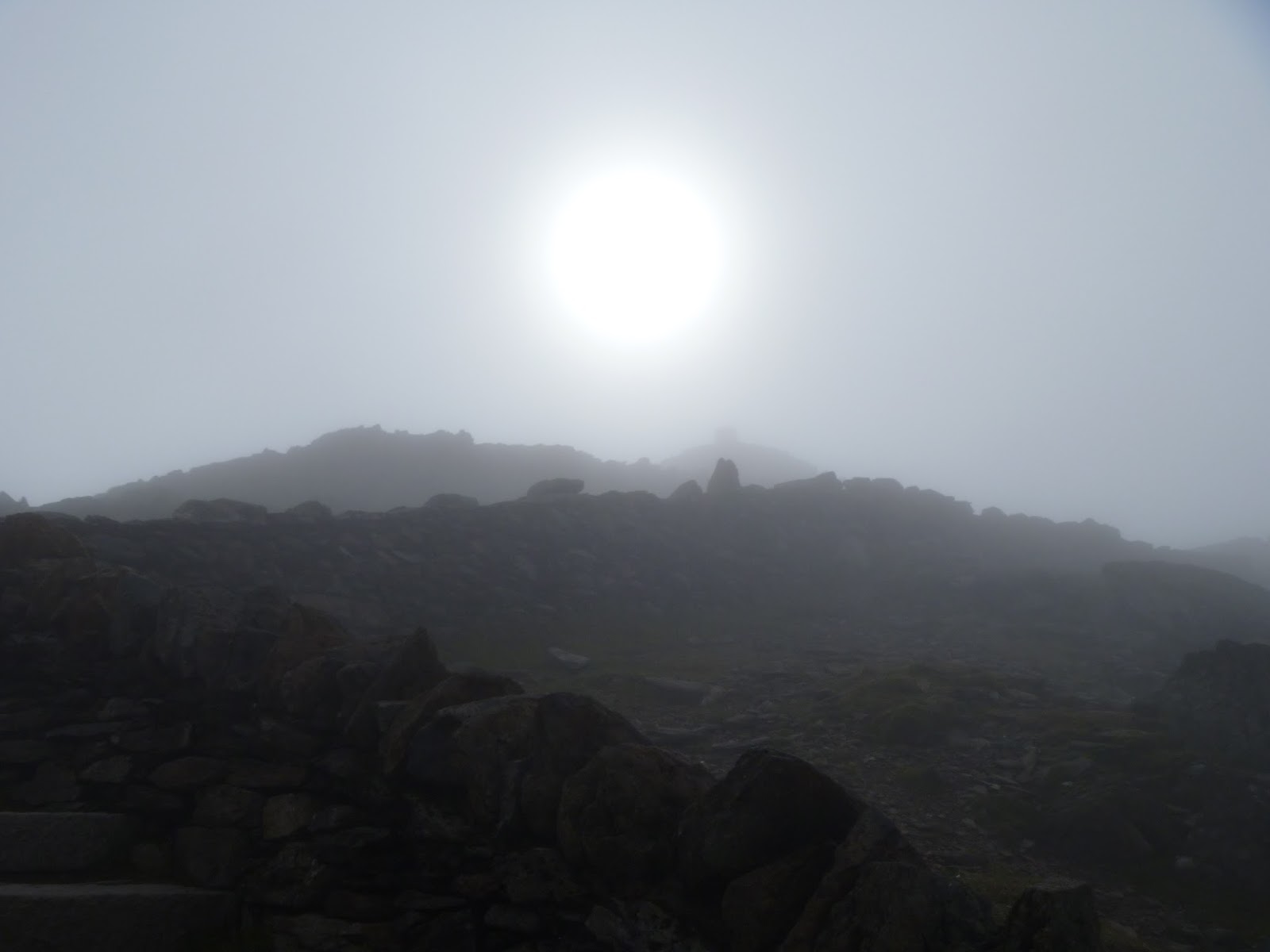 The top as I caught sight of it 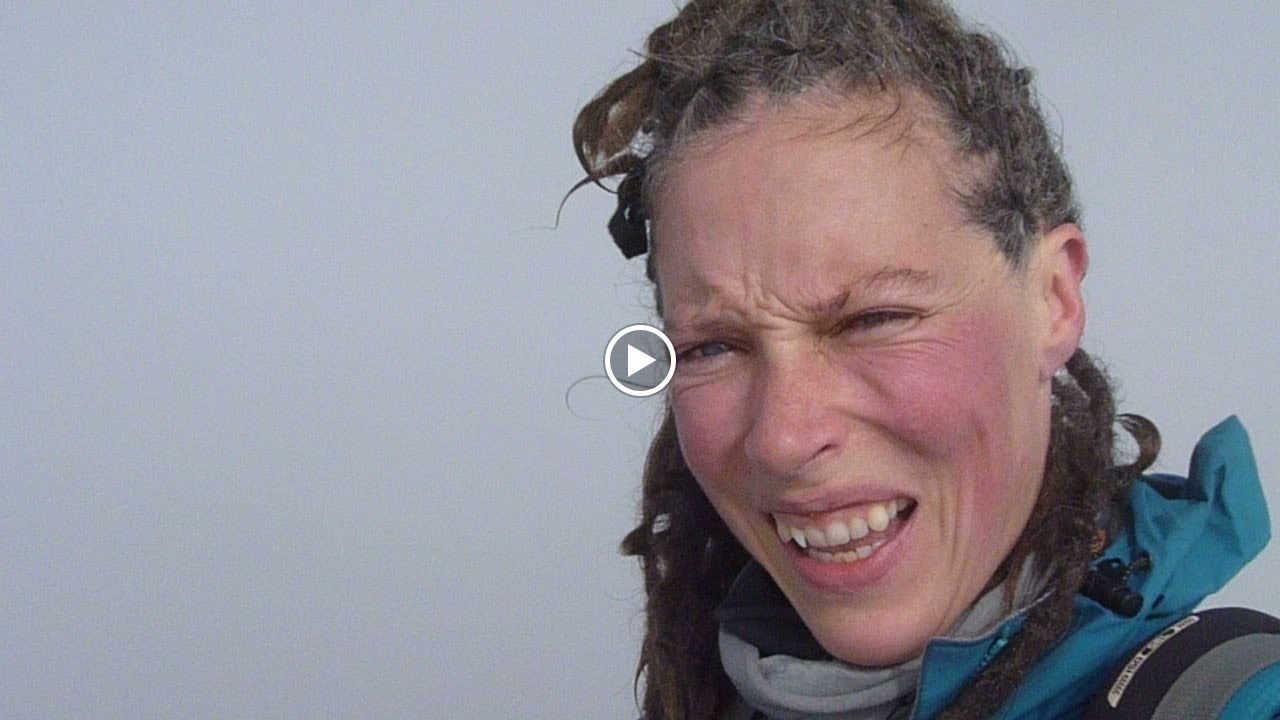 I accepted the way back pretty soon. And re-emerged from the cloud. I decided to take the Miner's track back. And that was quite busy, but that was alright. The views were still lovely! And when I got back to the car the parking lot was so full it had been closed off with a chain. New entries only when others left! That's Snowdonia for you. But I felt quite replenished and ready again for some office-and-lab drudgery after a hike like this. I should do this more often; getting up early and do a nice walk. It's well worth it!