For six weeks you work your 12 hour shifts in the middle of the night. And then, one day, suddenly it’s over.

We did our last shift up to Saturday noon. We cored up the very, very last core! Number 223. It unfortunately wasn’t a good one; the bottom of the core looked decidedly Holocene. But one tries! And then we started our last splitting spree. Not all the work was done by noon, so we handed over to the day shift to finish it off. I did take the opportunity to thank the night coring shift for being so spiffing, but as the work wasn’t done yet, I didn’t feel there was a lot of space for more. The day shift had to get cracking! And it wasn’t closure yet. 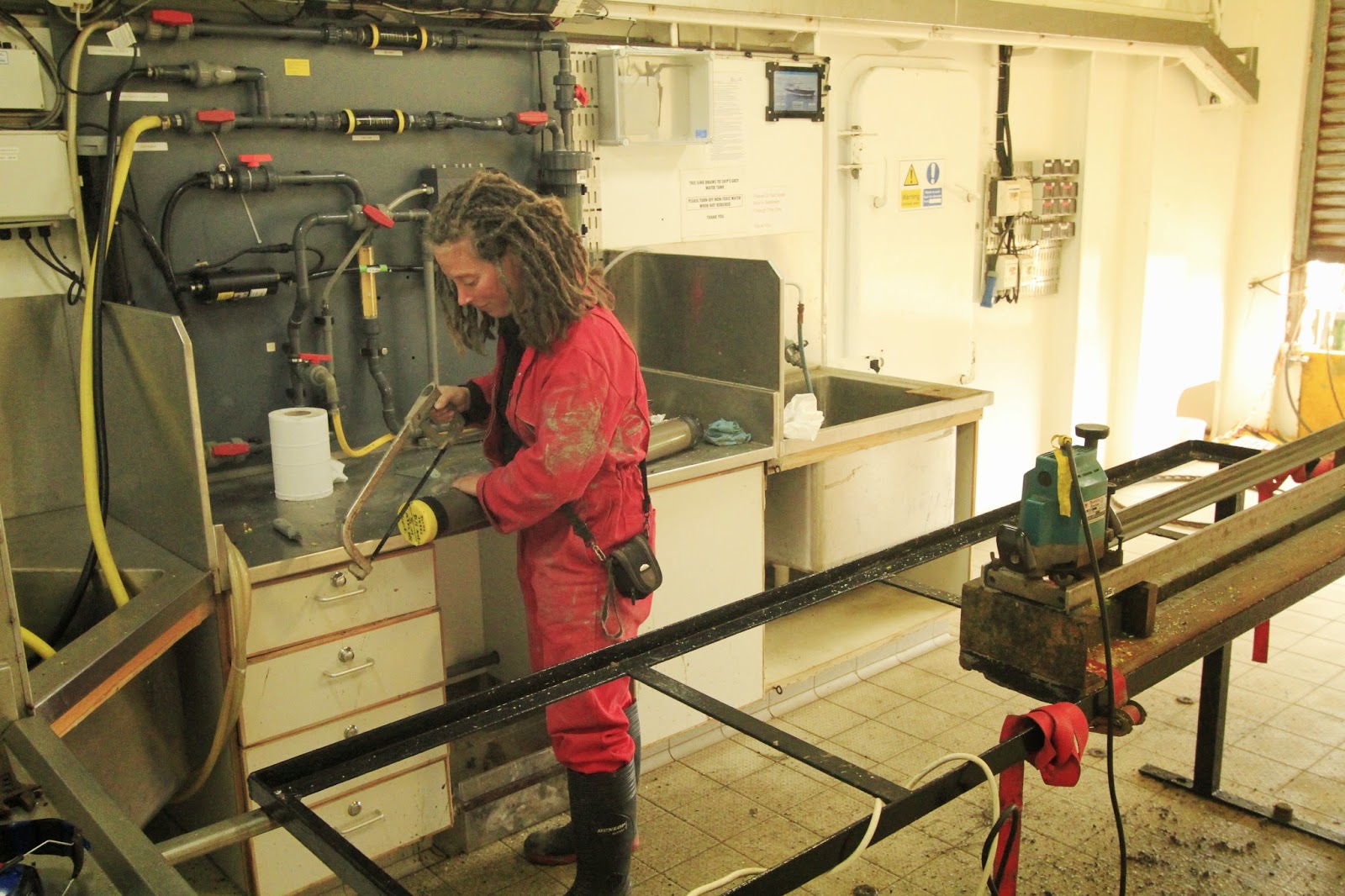 Me cutting the cap of an otherwise split core. Pic by Kasper Weilbach 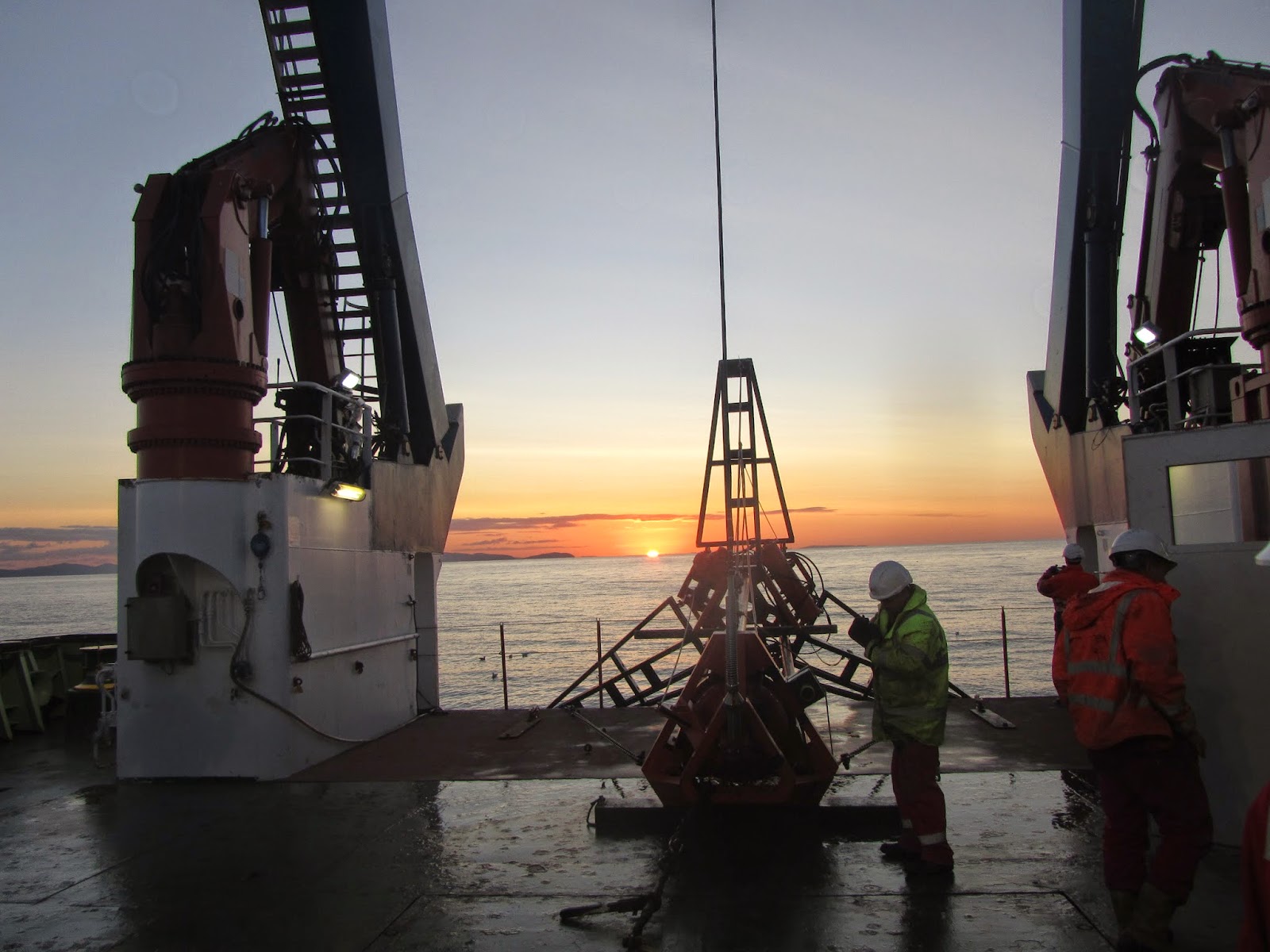 The sun comes up behind the last core of the cruise

We all went to bed early. Normally I would get up at 11PM, but this night there would be a party to celebrate the end of work, starting at 8PM. So we had to get up early for it! That’s a bit weird.And what was also weird was that while I slept, science on board had come to an end. And so much science! All these cores, and 5200 miles of geophysics! This had been a very successful cruise. We had been blessed! 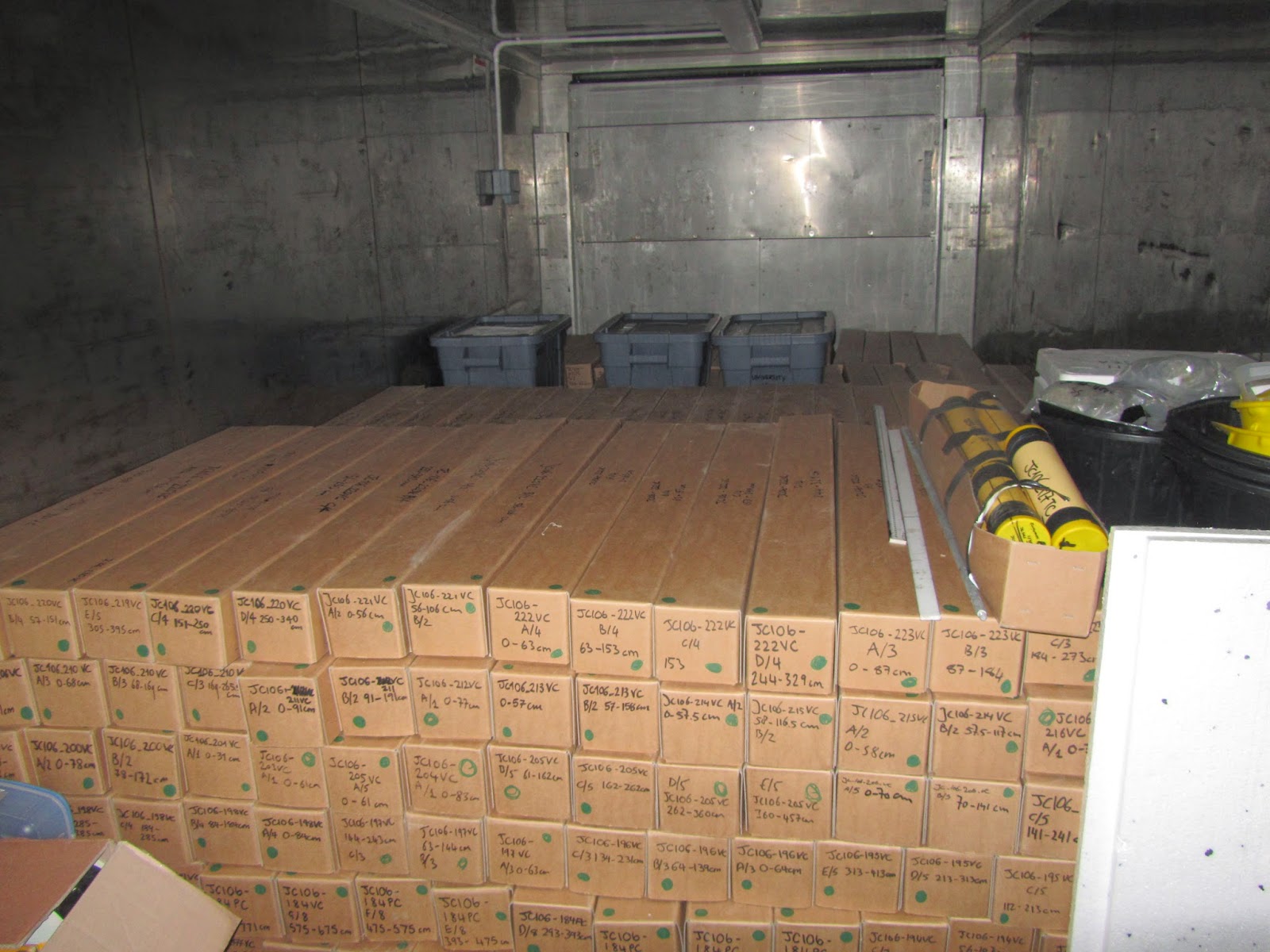 The booty: 223 cores, in 627 core sections, amounting to some 6 tonnes of material

I bumped into Colm, the chief scientist, on the stairs. He was on his way to start the party, so I joined him. That way I became the first to open a beer on this amazing cruise! But certainly not the last. It was good to finally get to drink with the day shift, even though I knew it was risky, as I had been pretty close to teetotal for six weeks. And I don’t like hangovers!

There was beer. And when it ran out, and the crowd thinned, I brought out a bottle of good whisky I had saved for a special occasion. It didn’t last long! But it was good to celebrate in style. Later the dancing started with the die-hards. And with fresh people; crew who came off shift tended to join. There was much rejoicing! But I was quite aware of what partying to dawn can do to some alcohol lightweight whose biorhythm is rather unfortunate, so when my colleague Katrien suggested going out to watch the sunrise I went for it. And lost her immediately.  And found some people from NMFSS and BGS already huddled on forecastle deck. But I was in a sweaty T-shirt (and had seen countless many sunrises the past six weeks) so I quickly left for my bed, which I reached after a last hug from a crewman (thanks Steve!). And when I woke up I had a resounding headache. 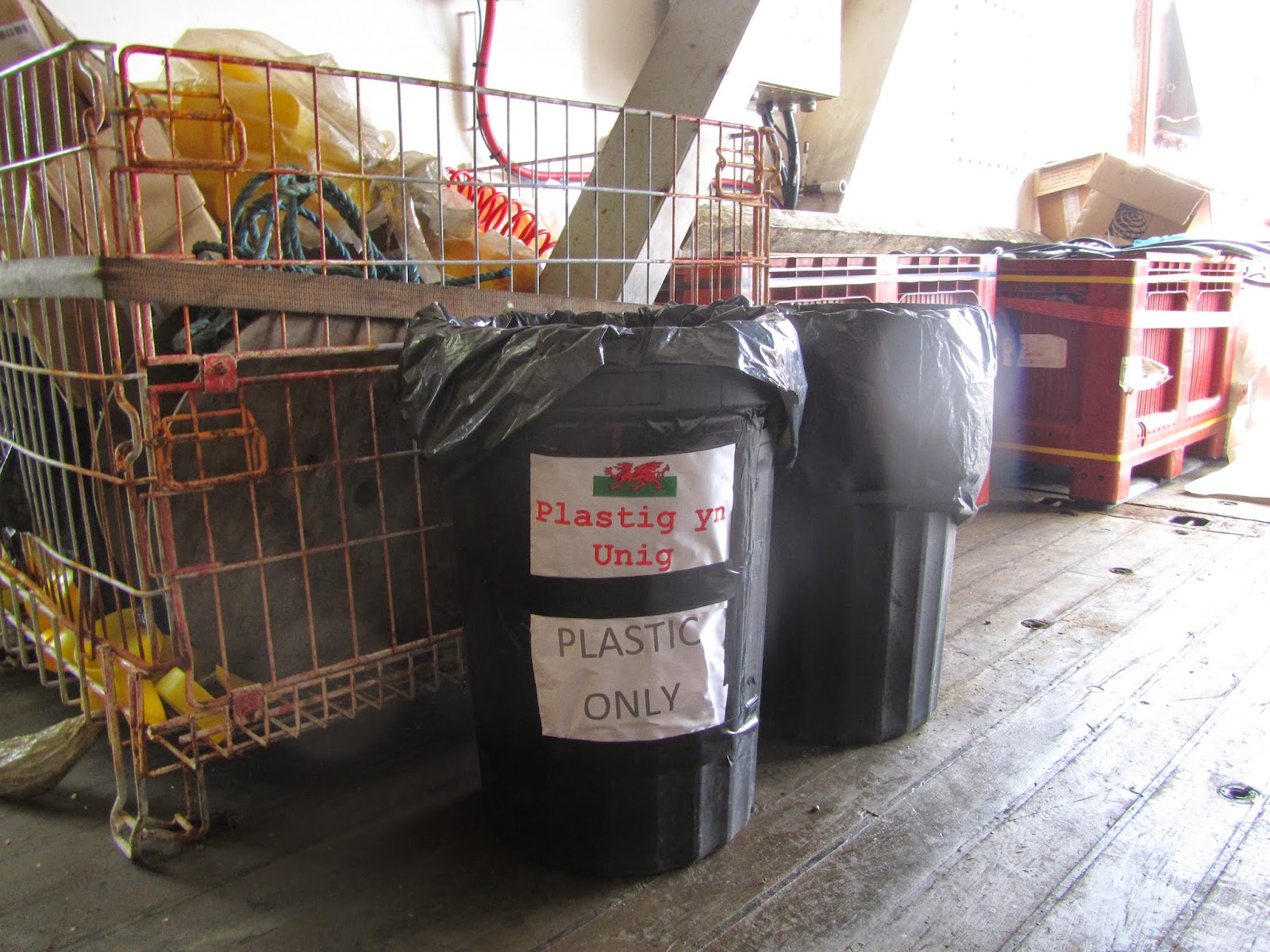 Some fun the crew had with my on-board Welsh learning

When I woke up it was about 10.30, and I remembered the guy who had complained I never came to the bridge, and that I should come and make a dent in his boredom during his 8-12 shift. I still could! So I did. Feeling rather miserable. But he showed me around, and I got to see Dartmoor and the Eddystone Lighthouse through binoculars. Hello Southwest! So it was worth it. But at noon we both went down for lunch-posing-as-breakfast, and after that I decided to go back to bed. When I re-emerged I just wandered around aimlessly. There was no structure anymore! No shift. And pretty much no people. Nobody was required anywhere! The day shift had managed to pack up and clean the lab on their last shift, so there was nothing to do. And I was too hungover to learn Welsh or prepare lectures. I felt strange! A bit empty. After dinner I just went back to bed.

I woke up on Monday, at 4:45. You can get the girl out of the night shift… but I decided I might as well wake myself up with a last gym session. 5AM had become quite a standard time for me to hit the running machine! And it made me feel better. 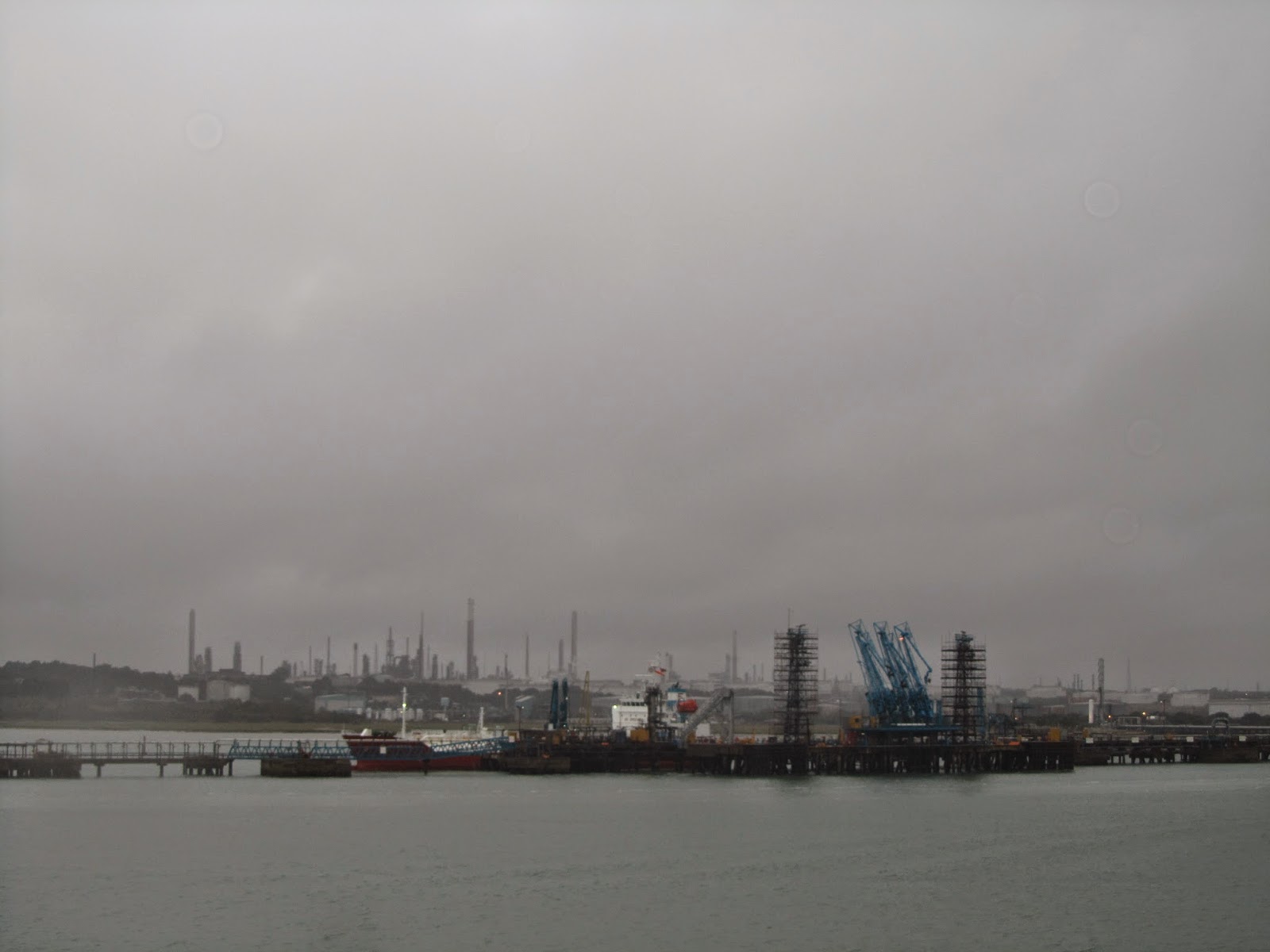 Coming back into Southampton Harbour

By 10AM we were docked. And then the big hugging started! I had become rather attached to the night coring team. We had spent pretty much every waking minute together! And now we would separate. But we will meet again. The scientific community is small.

Then there was only the matter of getting our hands on the rental car that awaited us, load it up, and get home. This wasn’t as easy as it should have been; I had thought we’d be only three driving back, but our student came along! No way that would fit. We solved the situation by having our bulky work kit shipped to Durham, with James being willing to pick it up from there on his impending visit. That helped! So after some more hugs (I like hugs) we were off. Leaving the RRS James cook, our home for 40 days, behind. Hopefully, we’ll see her again next year, for the second cruise, this time on the North Sea! Watch this space! Picture from the early days of the cruise; a very rare Nightshift afternoon pint on the forecastle deck. Cheers dears! Pic by Kasper Weilbach