Wales with the PCG


I go to South Wales to cave with the Yorkies, and I go to North Wales to cave with the Plymouthians. That doesn’t make particularly much sense but it is the way it is! I like North Wales a lot, with its big slate mines and amazing Snowdonian landscapes. And when the PCG would travel north to go there I saw a nice opportunity to catch up. And Hugh saw that even more; he only lives 2 hours from Mt Snowdon. So on a Friday I left work early, biked to the station with my enormously heavy backpack containing all my caving kit to the station, and conquered a seat. In Liverpool I found Hugh and his car, and off we were! We had planned to eat on the road, but we missed all the potential venues until we approached Llanberis, our goal, so we phoned ahead. The others turned out to be in a curry restaurant, so we joined. It was good to see everybody again!

After dinner we went to the hut and made ourselves comfortable. Rick distributed copies of his newest tome “Devon Great Consols – a mine of mines” – most of us had ordered a copy. (Scroll down on this page for a look) DGC is indeed a mine of mines! We also tried to decide on where we would go the next day; there were some people eager to do Cwmorthin, and some preferred a lead mine Rick came up with. I had visited the former only in September, so I was keen on something new. So lead it would be! None of us had been there, but we had a good grid reference. So the next morning, after a planet-sized breakfast, we jumped into two cars and were on our way.

We find the parking lot without problems, and then also found the entrance with ease. So in we went! The idea was to go in, and then soon drop down to the next level down, so we walked along the level. We could often see a gaping lode above us. And below us. I wondered if we were delicately balancing on a false floor in between, but research afterwards showed they were two different lodes, and we were walking on rock most of the time. Good! What was less good was that by the time we reached the first opportunity to drop down we lost the first man. Alex had a knee injury, and the clambering over collapses proved too much for his damaged physique. So he turned around, and we moved on. The level just went and went and went! Several times we thought we’d reached the end, but most of these times we had just encountered a collapse one could manoeuvre past. 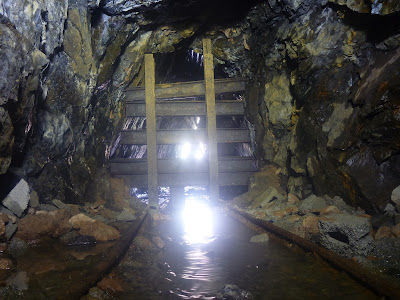 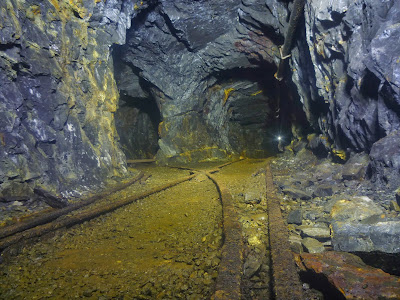 The level with its rails 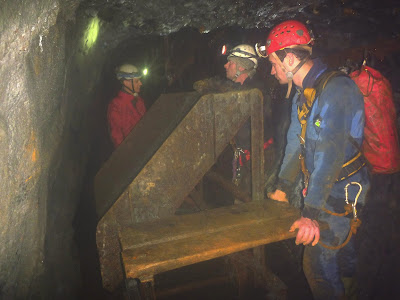 A movable ore chute we found - I had never seen anything like that.

Along the way, we also found a ladderway up. I checked it out; the ladders were a bit rickety but it was worth risking that. On top I found a winch, a crane-like construction, and an enormous flatrod. Amazing! But there were people waiting for me below, so I took two hurried pictured and went back down. 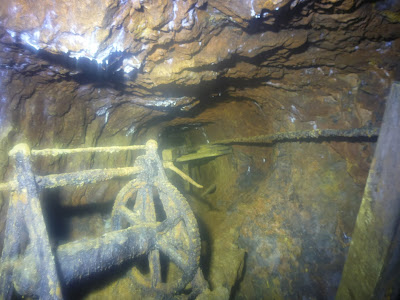 A slightly hazy picture of the winch and the flatrod

Near the end we also found a ladderway down; this just went and went. Sixty metres deeper we hit the lower level, but it was largely flooded. We weren’t too keen to spend the limited time we had (we had Alex waiting for us!) wading through deep cold water, so we went back up. On the way back the others tried the ladderway up too; I used the time to do some photography. 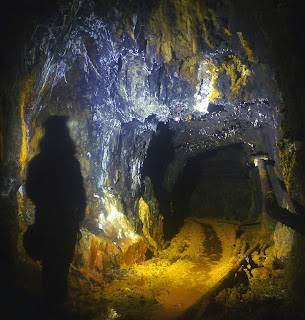 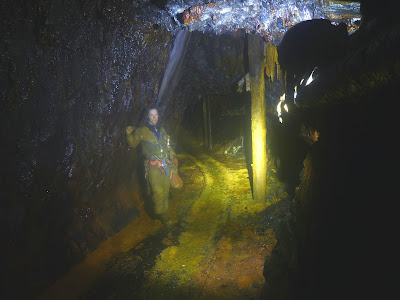 As we had all been wearing full SRT kit, and were lugging ropes around, we decided to drop down to the lower level where we had left Alex after all. The pitch lead to a steep rubble slope, and down to a next pitch. When Hugh went down I saw the rope rubbing, and decided to stay above. We had to get back out soon anyway! When Richard came back up I saw the rubbing only happened when the person in the rope was almost down, so I could have dropped safely. Oh well! Next time. 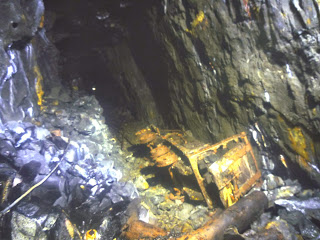 We struggled back up the rubble slope, and went out. A bit later we found Alex asleep in his car. That was good; those who are asleep aren’t bored. The next stop was Pete’s Eats, where we all (except Dave who was feeling woozy) had a hearty meal, after which we retreated to the hut and exchanged stories.

Another item on the agenda was tweaking newest Dave’s SRT kit so as to make it easier for him to work it. We started out trying to make his foot loop the right length, but later we found out that there were bigger issues; a convenient beam he could hang from showed that if he hangs in his ascender and doesn’t hold on to anything with his hands, he hangs upside down. Oh dear! That would indeed make rope work rather tricky. A lot of faffing later he was hanging more or less diagonal. Not perfect yet but doable. Result!

The next day I wanted to be home in time for the next ceilidh – Abi would be playing! But that meant preferably getting the 15.22 train from Liverpool. And thus leaving Llanberis around 1PM. That does not leave a long day for underground antics! We decided to go with the injury crew, who would visit “the Electric Mountain”; a hydropower plant hidden inside the mountain that holds Dinorwic slate mine, and nowadays the National Slate Museum. It was a bit of a disappointment as far as I was concerned; you got the same information fed about four times, while only seeing a limited part of the plant. And one can imagine one doesn’t want tourist swarming an entire power plant, but at least the level of repetition could have been a bit lower. And then it was already time to say goodbye! Who knows, maybe the southerners come up north more often…
Posted by Margot at 18:38