When I moved to York I hoped for lots of movie houses. Plymouth has one, and it's bigger; about 260.000 people instead of York's 200.000 (I looked it up!), but Plymouth is a naval base while York has been a cultural centre for centuries. Tromsø only has 60.000 inhabitants and it also has a movie house. In Amsterdam I didn't realise how spoiled I was!

When I was walking through town with my parents I noticed a banner. A film festival! A Short film festival, but still. I got excited! And I immediately mailed the people from the film club, and a few others that might be interested, to make sure they were aware of this, and to see if other people wanted to come too. And soon after I bought me a passepartout.

Screenings started on Friday. After work I set of with Roman of the film club to see our first movies. He had requested comedy, as he said life provided enough drama as it is. So comedy it was! It wasn't that good actually, so I decided to see some drama afterwards anyway. That wasn't that good either. Not a good start! But there were many more genres to try, and not only that; there were many venues to try. Not only the cinema is on on the festival; several museums have joined, and several monumental buildings, and a clothing shop and an art gallery and a cafe; many of these places I hadn't been, and was keen to see. So the next day I was ready at 10. The venues were great, and the films got a lot better. I froze to the seat in the Mansion House, which played a role in Blood and Chocolate; I listened to the rain falling on the thin slate roof of Micklegate Bar; I saw documentaries from the long, wooden tables of the Barley Hall; I sank down in the comfy chairs of the 9-seater cinema hidden in the clothing shop. I saw documentaries about female killers and ageing Germans, music videos of Mt Wolf and Bat for Lashes, drama about Finnish nightclub shoot-outs and Israeli poets, comedy about casting and failed dates, animation on deserted floating cities and big white fluffy creatures, art films about female drag queens and Japanese winter, experimental films about dancing urbanisation in Hong Kong, and lots lots lots more. To get an idea of the variety, do check the trailer on the festival website. 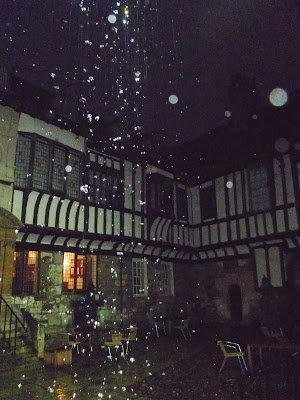 The courtyard of one of the venues: St William's College, in heavy rain 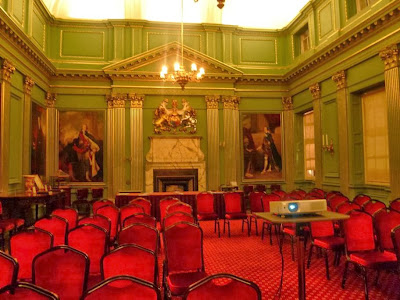 Most of it I saw alone, but I did team up a few times with some film-loving colleagues. That was nice! I even ended the whole festival by having a beer with one of our lab technicians and his biologist girlfriend in one of the ancient and quirky pubs that had been on my to do list for a long time. The usual suspects had tried to take me there before, but it had always been too busy. Now I've finally seen it!

The film I think I liked best was a short drama about a Chinese widower and his little daughter who live illegally in France: Hsu Ji derriere l'ecran. The father gets exploited by a lady as a labourer who works in way too dangerous conditions, and she is in the process of ensnaring the girl for labour too. All very bleak and serious! But then three characters step out of the silent slapstick film she is watching, and not only wreak a lot of havoc, but also come to her aid. And then there is also the cartoon walrus that steps out of the book she is reading, and starts wandering around. So the dad even dies, but the film does not become depressing. It's a genuinely strange film! But very endearing.

Another impressive (though very short) film I saw in the category music videos can be seen online: I recommend it! Magma, by Dvein.

I didn't get particularly much done this weekend other than watching films. But now I've had my kick and can live on that for quite a while. I don't think I'll still be in York for the 2014 edition!