What a 93-year-old farmer doesn’t know about his land is not worth knowing. In April 2012 we had gone to Norfolk to scrutinize interglacial sediments we knew, from literature, were there. We had found a plethora. But upon coming back and evaluating the results more questions popped up. We had found a freshwater peat overlain by a marine clay; the moment the land got flooded frozen in time. But we found that only in the lower part of the area. Had we found it at its highest point? Or would it be possible to trace it further up the slope? What was between two crucial boreholes? What was below the peat? We knew we wouldn’t be able to answer all these questions with the equipment we had so far used, so we decided to come back with heavier stuff. And some professionals to work it.


I met Tasha in Swaffham. It would only be the two of us; Antony had commitments and Roland struggled with his back. And then, of course, the drill team. We caught up over a pint and dinner; the next morning, all would kick off.
We met at Manor Farm; our prime drilling location. We knew good cores had been taken there, but the material had not been preserved. We had not tried to core there ourselves; we knew there was an aquifer in the subsurface, right about where the interesting sediments were. We were not keen on having a blow-out, and that would be something professional drillers would be able to prevent. Was the idea. They knew about it…. 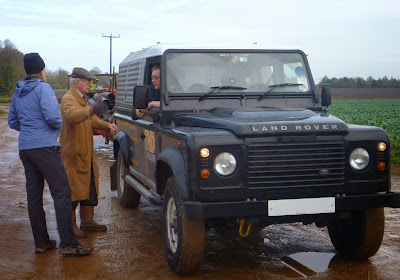 Tasha, Mr Wilson, and Tim the chief driller
Once on the farm we met the farmer, or rather, one of the famers; Mr Wilson, who was 93 years old, and though no longer in charge of the farm, clearly still very actively contributing to it. We also met the drillers; two young chaps called Tim and John. Mr Wilson showed us where the old drill hole was, and where we could drill too. So the drillers magically transformed their trailer to a quadrupod drill rig, and got started. But later Mr Wilson brought in a picture of the blow-out that had alerted earlier drillers to the existence of the aquifer. He strongly advised us not to repeat that. And when an Englishman strongly advises against something, that is about the same as a Dutchman telling you he’d kill you if you even thought about that. And the drillers were prepared for some groundwater, but not for a force like that! So we decided to only drill to shallow depth. It’s not what we had come for, but we didn’t have permission yet to access our second site. So what can you do? 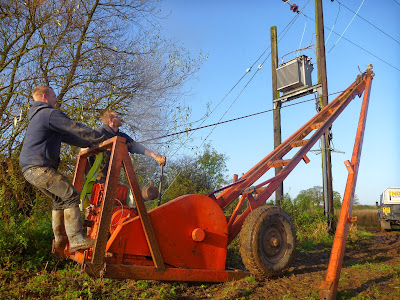 Turning a trailer into a drill rig
We tried a few other locations on the farm, coring by hand, still looking for the clay that would have the peat below, but only got sand. Mr Wilson kept zipping by in his car to see how we were getting along, and to give us additional advice. What a 93-year-old farmer doesn’t know about his land is not worth knowing. It greatly helped us understand the local geology, although that means understanding that it was very patchy, and quite hit-and-miss. But we figured we had, almost by accident, already found the best coring locations last time; we only had not always managed to core deep enough. But luckily, permission to get to our next site came in! So we called it a day, and agreed to pack up the next day, while they key to the site was fetched, and then go on at the second site. One of the farm workers offered to show us the way to the next site over the farm, and while he was at it, he also offered us potatoes, and cabbage, and leek, and kale… so sweet! We went home with enough veggies to last us the rest of the fieldwork. And then some. 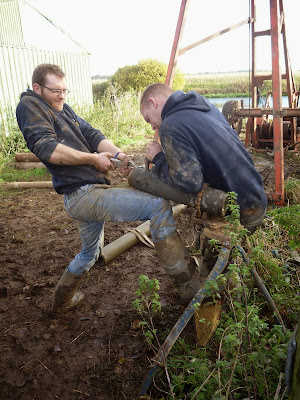 Extracting the core from the liner isn't easy
The next day the men packed up the drill site in no time. And equally quick they set up at the next site. Off we were! We hoped to get through the glacial sands into the clay within a few metres, but core after core came up only with sand. Sloppy sand. The borehole kept collapsing, the chaps had to hammer more and more casing down, and it took forever. We were starting to fear we may have ventured too far; would we even find clay? We couldn’t re-core where we had been before, as that was near a badger set, and these are protected. But then, metres lower than expected, the clay appeared. Lots of clay. Clay as far as the eye could see! Then we started to worry again; would we find the peat? It wasn’t where we expected it. It wasn’t a metre lower. Nor two, or three. Then, suddenly, when Tasha and I were sitting in the car sheltering from the wind, we got the “thumbs up” from Tim. We rolled out of the car and scampered over; had we indeed hit peat? And we had! Five metres deeper than it had been in the old borehole, which was only some 50 m further south. All worries were gone. Happily we sampled the transition. And we got through on the other side, where we found sand. So we could stop there. 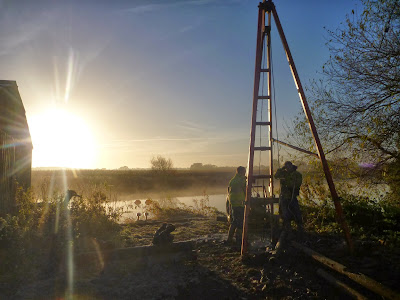 Taking down the drill rig on a crisp morning
Bringing in a coring team is a lot more expensive than having a coring team, already on site, go on for a bit, so we decided to see if we could find out what was below the sand. But that was for another day. We went home. Back to our potatoes and kale! We had a nice quite evening. Fieldwork with Tasha is like that; we are a good team. We acknowledge and respect each other’s idiosyncrasies and tend to run a rather smooth household. And the cottage was nice! I’ve done enough fieldworks with people yelling at each other to really appreciate  doing fieldwork only with people that get along well. 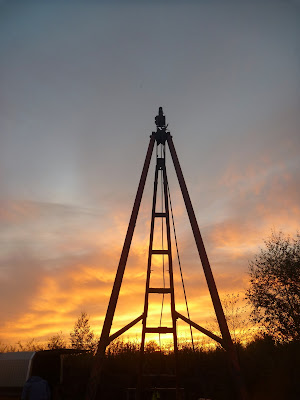 Arty picture of the drill rig against a beautiful sunset 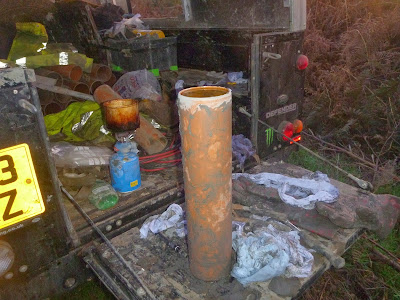 What it's all about - a sediment core, topped up with warm wax, which will provide a airtight seal
The next day we would try to get through the sand. Tim and John hammered some more caving down, as the sand was wet and kept collapsing. By the time we had to stop we still had only hauled up sand. We knew that sometimes. That sand can be ten metres thick, as we knew from BGS borehole data. No use to keep pursuing that. We had a break in the sunshine, and then the men set out to take the core hammer apart, and pull the casing out. 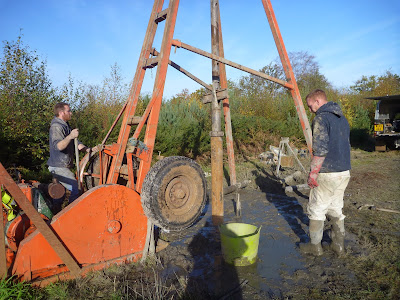 Hammering the casing down a bit further - with heavy equipment