Give someone more space and they'll fill it up. Works with houses. Works with backpacks too. At least, that is the public perception. I had been looking for a BIG backpack for a long time, but everyone I mentioned that to said it would only lead to bringing more stuff. Well, no! I have had my lovely 65+15 backpack (a Lowe Alpine Appalachian) for many years, and it's a great pack. But when I go on a snow hike I have to hang all sorts of things from the outside, and that's a pain. Winter hikes require thick sleeping bags and large amounts of clothing and fuel. That fills up one's bag quickly! And it is always more than you can fit into a 65 litre pack. A large pack migh simply be able to accommodate all of that. But really large packs are hard to come by. I had never seen anything satisfactory in the shops... 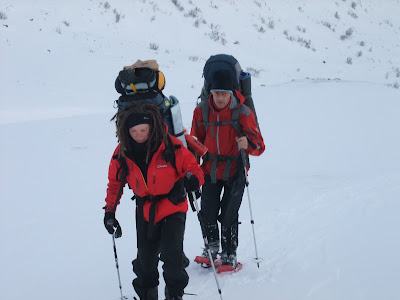 A picture from the snow hike in 2010: all sorts of things strapped to a dangling from my pack!

I bought a 90 litre pack when I was 14; it served me for a long time, but when I finally bought the Low Alpine I realised how unnecessarily uncomfortable I had been for all these years. The bag didn't fit well! And that matters. I kept the big bag for a while; it did very good service when I was living in students' accommodation, and we shared toilets with 13 (or was it 14?) people.And someone has to buy the toilet paper!

With another winter hike approaching, my quest for a large, but better, pack intensified. And then suddenly I got an email from a cave rescue colleague. MacPac offered mountain rescuers (we are a subcategory of those) all sorts of equipment at reduced prices. Including backpacks of up to 90 litres! Now we're talking! I immediately ordered it. But it was out of stock. Then I wondered if the 80 litre pack was just 80 litres, or 80+something, like most packs. But the guy dealing with the offer had gone on holiday. Then a lot of confusion followed, but in the end I received my shiny new 80+20 pack. Yay!

I hope it does what I hope it does. I looked at my old snow hike pictures; I found one where I have my crocs and a snow shovel and a down jacket and a plastic bag with something and a fuel bottle and my eating bowl and lord knows what else strapped to the outside. It is a pain to arrange all that. And even with all that on the outside, it takes some violence to fit the rest inside. And the last hike I even sustained tendonitis in my right arm; try packing the maximum amount of stuff into a pack with one hand! And then strap all sorts of things to the outside! This time I hope I can just throw things in. And in a way, this bag comes too late: this coming hike we might have some luggage sleds, and these can hold much more stuff before they become cumbersome. So I might well have the opportunity to give some of my kit away to the sledgers. But still! I will first have to get that bag to Norway. I'm glad I have it! And now it was time to try it out! 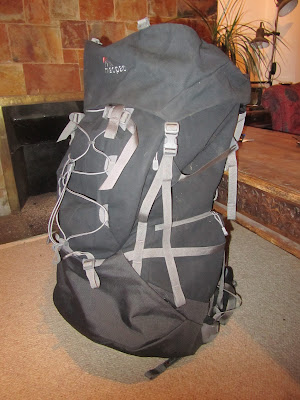 I even have a 130liter Bergans and love it. 90 liter is minimum.

In the alps you find stuff on the trails, because people have most of the things outside their backpack and then loose it. I have all inside and still have enough space. And I dont take more, since I look at low weight and minimum stuff to take along

Hello Max!
130 liter! I'm envious now. But I don't think I could resist the temptation to crawl in sometimes... :)