What does a meal normally consist of? Starch, fresh vegetables, and cheese. In my world, at least. When you go hiking the fresh vegetables become less practical: they wither, freeze, get squashed... so you get a few dried ones and compensate with meat. Meat gives taste and energy! But this time I'll be in the veggie group. So no such luxury. Now what? I figured I could do one meal with magical ingredient pesto. That makes everything tasty! But that left another one. Noodles are nice and quick, but how do you make noodles tasty and nutritious with only dried veg? The answer is: satay sauce. But you can't buy that in English supermarkets. So where to go?

I found out we have a late-opening Asian supermarket in town. My saviour! They do sell powdered satay sauce, though not the type I'd prefer, as it isn't the "add water" but the "add coconut milk" variety, and that's a hassle, but it's better than nothing. And they had dried pak choi, mushrooms, sea weed, water chestnuts... I bought a selection. And they had veggie satay skewers! But experience has taught me not all of that is palatable, so I decided to make a try-out meal of my new purchases.

The first thing I found out was good. The pak choi, mushrooms, and sea weed are soft after only soaking in water for 2.5 minutes. The chestnuts weren't. (That turned out to take hours.) The second thing I found out was that if you combine the satay sauce with water, milk powder and thickening granules, it becomes recognisable sauce. Good! The third and fourth discovery weren't so good; the food wasn't really tasty (the sea weed and the skewers have to go; the pak choi and mushrooms are OK) and the chestnuts were still hard after an hour. But the sauce did wonders. 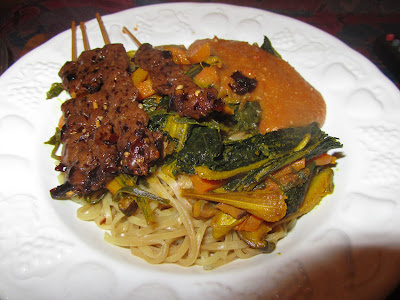 The result: it looks quite nice, actually! But it clearly needs improvement.

That all helped me in my dinner design: I have to think of some additional ingredients to compensate for the seaweed, the chestnuts and the skewers, and I have to go back for powdered coconut. And then try again. I'll be eating a lot of noodles the coming days!
Posted by Margot at 17:58